Ah, cricket food. There’s the heady scent of boerewors and Russians sizzling with onions in the morning; the chips dusted with Aromat on sticks; and the iced doughnuts that you’ll regret but can’t resist because the tray has been passing your nose all day. And, last of all, the distinctly glorious taste of schadenfreude when the Aussies are caught red-handed and then caught all out for 107. 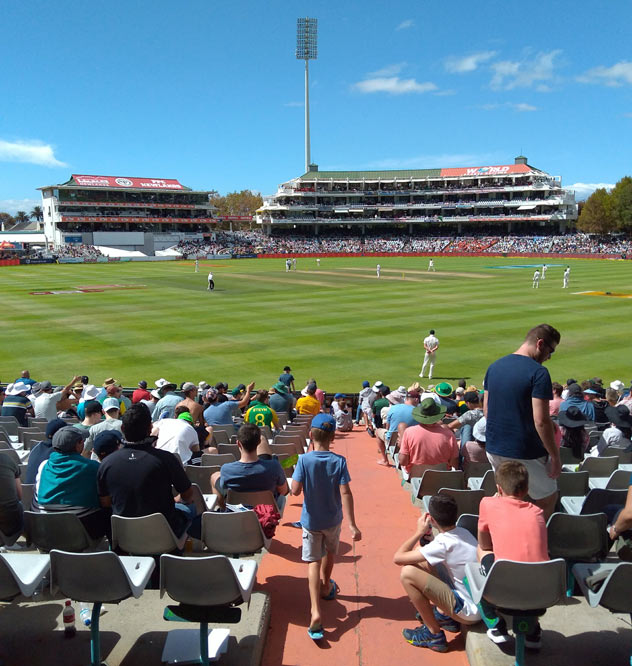 The Proteas walloping the Aussies. Photo by Katharine Pope.

While the food is certainly delicious, sports matches are not generally known as places of culinary discernment. I, for instance, generally make my choice based on the stall with the shortest queue. But on Sunday, thanks to the advice of a friend who spends far more time there than most, I think I might have found the right answer. The correct thing to eat on celebratory occasions such as these is a roti from Curry Café at Newlands.

A thick, incredibly buttery naan filled with richly fragrant curry and topped with a sweet onion-and-tomato sambal. I loved the lamb curry (R80). The lamb falls apart as you bite into it and I reckon, served in a restaurant, you’d pay closer to R150 for something of this quality. 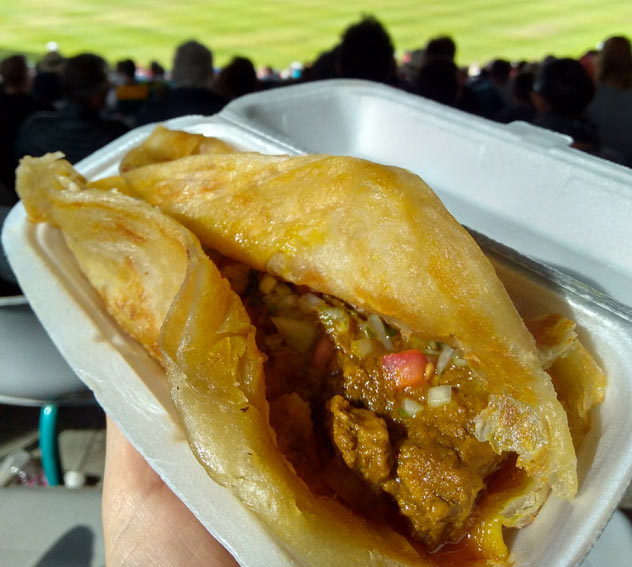 The buttery naan is the highlight of the dish. Photo by Katharine Pope.

The bean curry roti also comes highly recommended by my friend Kevin, who says he has had it the last three times he’s been at the cricket. “Their roti is very good, the quality of the roti itself being the highlight,” says Kevin, a cricket-distracted research consultant from Cape Town. He’s also a fan of the sambal: “The sweetness of the onion also goes very well with mildly spicy, fragrant bean curry,” says Kevin, who should frankly give up his day job and start a blog about cricket food. 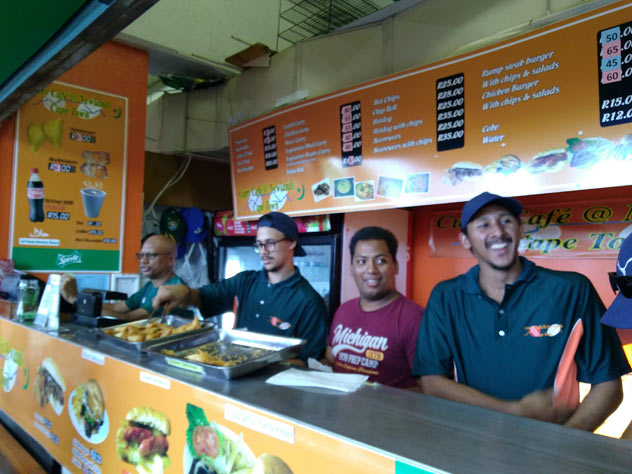 The friendly fellows at Curry Cafe. Photo by Katharine Pope.

Also on offer are chicken and mince rotis (both R65) and hot chips, which Kevin favours as a side. (I’m not sure how, to be honest – the portions are quite generous – but it can be a long, and tiring day. Thinking up new and punny insults for the Aussies is, after all, hard work.)

Pair it with a plastic mug of beer from one of the bars, or an icy cold Coke.

Where can I find it?

The stall is tucked under the North Stand of the Newlands Cricket Stadium. Look out for the orange signage and the friendly gentlemen who run the stall, some of whom have been there for years.

What’s your go-to order at sports games? Tell us below in the comments.