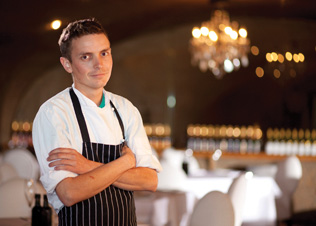 After extensive refurbishment, Franschhoek’s Haute Cabrière Cellar Restaurant has opened its doors under management of the von Arnim family and with a new head chef at the helm.

28 year-old Ryan Shell has taken the reins from Matthew Gordon after having completed his term as a lecturer at the renowned Prue Leith Chef’s Academy in Gauteng. But he is no stranger to the winelands town: some of Ryan’s formative years as a chef were spent at Le Quartier Français’s The Tasting Room, where he worked alongside Margot Janse. Other culinary adventures include stints with a number of much-loved local chefs (Mike Bassett, Rudi Liebenberg, Chris Erasmus and the likes) as well as time spent at Michelin Star restaurant, Longueville Manor, on the British Island of Jersey. Eat Out caught up with him a few days after stepping into his new role.

How will cooking in the wineland differ from working up north?
The biggest difference is the clientele. In Pretoria, most customers are locals, whereas down here there is a much more diverse crowd that will travel far to have a meal.

How do you feel about filling Matthew’s shoes?
My job is to continue to grow the great name that Haute Cabrière has enjoyed for close to two decades. While I’m not planning to reinvent the wheel, I am excited about putting my own stamp on things.

What’s on your new menu?
The menu is always changing; not every day, but a few times a week. It’s country favourites given a sophisticated twist.

What have you gained from being a lecturer?
I learned how good the classics can be.

What’s your favourite spice?
It’s not a spice, but vanilla is a big favourite.

White wine or red wine?
Depends on the mood and the food.

And your favourite local restaurants?
A small sushi bar in Stellenbosch called Genki, The Common Room at Le Quartier Francaise, and Pierneef at La Motte.