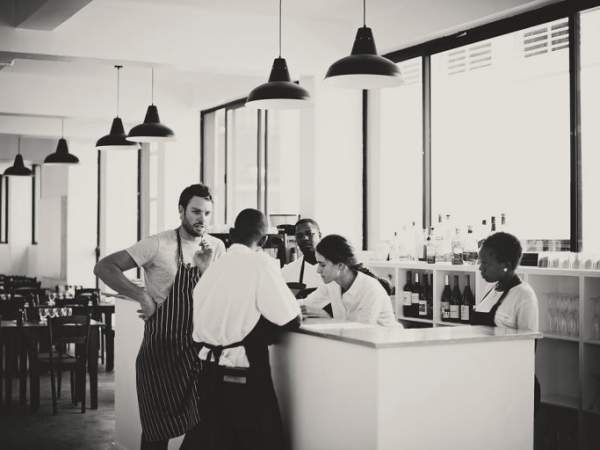 The bistro-style restaurant shook up the Cape Town food scene with a fearless dedication to locally sourced ingredients and nose-to-tail eating. Owner and chef, Giles Edwards assisted by his always-beaming Head Chef Siviwe Jaxa turned out some impressively simple food that won them many accolades both in South Africa and abroad.

Famed for its freshly baked madeleines (served with a rich vanilla Crème Anglaise dipping sauce and best paired with a double espresso), La Tête brought French-style food to Capetonians and their Instagram feeds.

The embossed white plates became ubiquitous on social media, with diners raving about the restaurant’s simple and delicate approach to local ingredients. Some of the most memorable dishes include the Blood-pudding Scotch eggs and Chicken Hearts served with potatoes and a glossy jus sauce.

Edwards has been a strong supporter of smaller winemakers, and the wine list always featured some of the lesser-known and hard to come by vintages.

“We are devastated to announce that La Tête will be closing its doors in the first week of February. Despite great determination to see ourselves through this prohibitive time, we can honestly say that we have tried every avenue to no avail.

Most of the team have been with us either from the beginning or through many seasons. The issue of leaving our amazing team of 16 staff without employment weighs heavily on our hearts. Regretfully, it is out of our hands. I would like to thank each one of you for your hard work, skill and dedication which has kept our dream alive over the years. I could never have imagined such an abrupt end to it all.”

In a last message Giles asks all friends of La Tête to join them before 6 February for “one last hurrah in these last few weeks as we say goodbye. We will be serving some of our favourite dishes for our final weeks of trading.” Reservations are strongly recommended. Contact the team at www.latete.co.za

READ FROM 2017: Eat this now: The fish sandwich at La Tête on Bree Street, Cape Town.