Number 165 Longmarket Street has been home to delicious things since Ilse Koekemoer opened Dear Me, The White Room and Tjing Tjing bar in the historic three-storey building in 2011. Since then, the middle floor has been renovated twice, most recently reopening as Tjing Tjing Momiji. Chef Christina Semczyszyn has been producing delicious Japanese-inspired food for quite some time at Tjing Tjing Torii (the previous middle floor, now beautifully refitted on ground level), but the food at Momiji feels like it’s been raised a level. Ilse, Christina and pastry chef Adri Louw went on a fact-finding mission to Japan in preparation, and it shows. 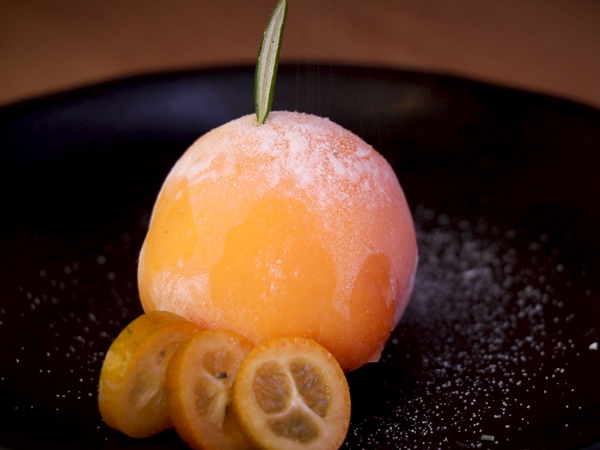 Best for: A special occasion and glorious Japanese flavours
Parking: The parallel, on-street variety. Or take a taxi, if you want to sample the cocktails and wine pairing
Cost: R795 for seven-course set menu, plus R495 for drinks pairing
Star ratings: Food and drinks: 5; Ambience: 5; Service: 4

“This is going to be good,” I think as I swallow my very first mouthful. It’s a beautifully crumbly biscuit ice-cream sandwich that oozes with a sweet, spicy and umami-rich ice cream. According the info card, which our waiter thankfully leaves behind, it’s soy and wasabi ice cream – which might sound eccentric, but is perfectly balanced. It might be my new favourite flavour. Then there’s a single cube of homemade tofu with buchu pickled ginger. If you’ve only ever suffered bland, flabby tofu, this cube is a revelation. It’s creamy and anything but tasteless; almost smoky with buchu and the tang of pickled ginger. Then there’s a tempura quail egg – wonderfully creamy beneath the crunchy batter – with truffled mayo and trout roe for good measure. My dining companion is Linda Scarborough, editor of Eat Out, and she’s making that wide-eyed drowning look she does when something is too delicious and she can’t get the words out. And we haven’t even started the menu yet. 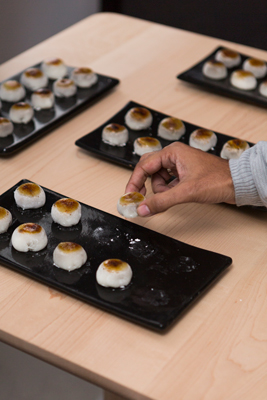 We proceed to the sashimi course, where there’s kob cured in yuzu – a little like ceviche – in lime-green wild garlic oil. The highlight is the hay-seared tuna, which has been smoked in the wood-fired oven on the rooftop until the texture has firmed. The flavour of the yellowfin tuna melds with the smoke to make something really special.

Then there’s a clear duck-and-daikon broth – with wonderfully tasty slivers of tender duck – a bread service, and then a little palate cleanser that makes us wish the lighting was better for photographs. It’s a water cake – mizu shingen mochi – a little wobbly dome made with water and agar powder and doused in molasses-like syrup. Christina’s version is flavoured with fermented tomatoes and basil; it’s like an invisible, impossibly light Caprese salad. 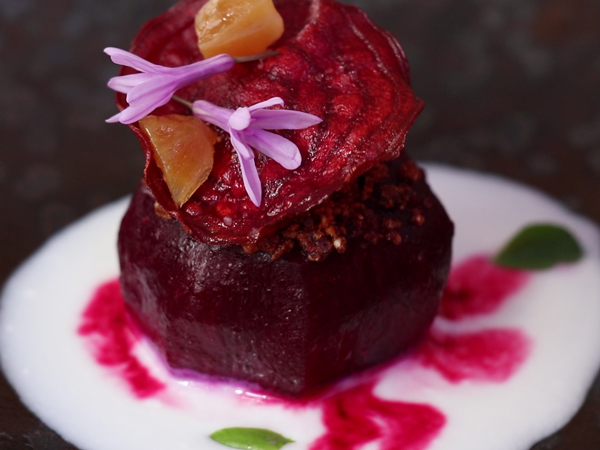 The braaied beetroot with kefir and miso sand. Photo by Romy Wilson.

Next is Waygu and tongue – the most expensive and cheapest cuts served simply, side by side. The tongue, basted in a Japanese barbecue sauce, is richer and forms a foil to the lean fillet, sprinkled with salt crystals. We’re at a loss to decide which of the two we prefer.

Dessert is perhaps the course that takes us furthest from our comfort zones. Asian desserts are notoriously tricky to sell in South Africa. After having to throw out good ingredients, many Japanese and Chinese restaurants simply don’t offer them. Pastry chef Adri Louw, another Japan-ophile, has done her bit to translate them with local ingredients and ideas. The kumquat mochi – a perfect soft ball of rice flour surrounding a ball of kumquat ice cream – may confound with its contrast of textures and flavours, but the kumquat flavour is clear and refreshing. Then there’s an absurdly creamy, zesty yuzu posset that’s likely to convert most, and the custom-made Kit Kat mimics the multitude of flavours available in Japan. The fusion of matcha, raspberry and white chocolate has me in rapture. 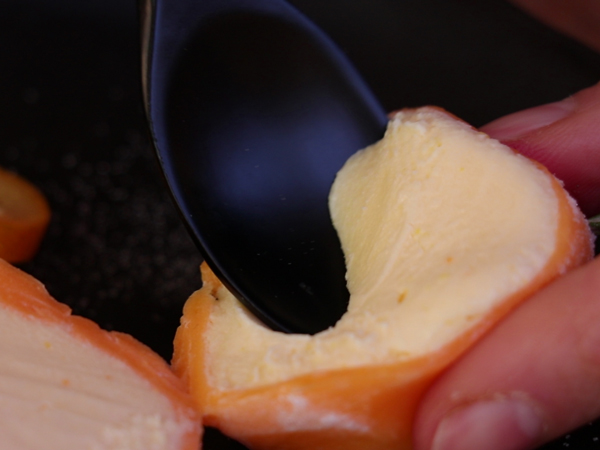 The rollercoaster of textures and flavours found in the mochi. Photo by Romy Wilson.

The meal ends with a magnificent fresh herb tea brewed in individual cast iron teapots and a little box of bon bons to take home.

Kick things off with a cocktail in the moody Momiji lounge. The cocktails are all named for Japanese fairytales and are equally artfully constructed. We’re dying to return to try the drinks pairing, which includes wine, sake, beer and umeshu – a liqueur made from the ume fruit. There’s also a list of options available by the glass around the R50 mark – including the house wine, specially made by Swartland star David & Nadia Wines.

Each dish is served on carefully considered crockery. There are traditional wooden boxes to open, tiny dipping bowls and even custom porcelain chopstick rests in the shape of little animals. It all adds to the feeling that we’ve travelled somewhere new and are on some kind of odyssey. The space itself has been transformed into a serene white cocoon with pale maple wooden furniture, white shoji wallpaper, and acoustic panelling on the ceiling decorated with pale grey bunnies. It’s a thoroughly calming space, making the act of eating over seven courses feel a little meditative. Also, glory of glories – the acoustics are great – despite the busy rooftop bar upstairs. 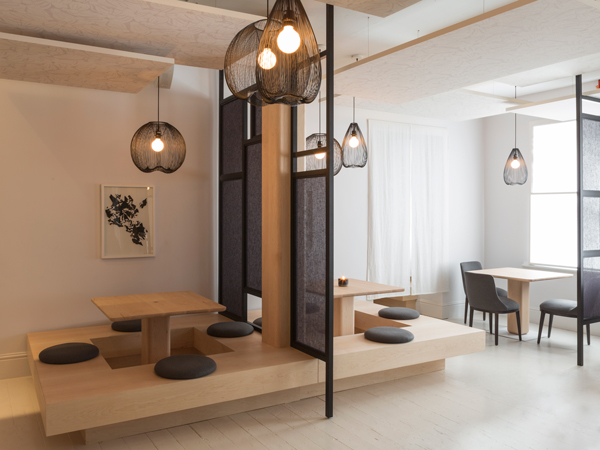 The dining area at Tjing Tjing Momiji. Photo courtesy of the restaurant.

The courses are well timed and spaced and, considering it’s only week two of operation, the staff seem well trained and quite knowledgeable about the complex and nuanced menu. There are small hiccups – a dire shortage of cocktail menus and a staff member rushing around looking for keys – but those are easily sorted. 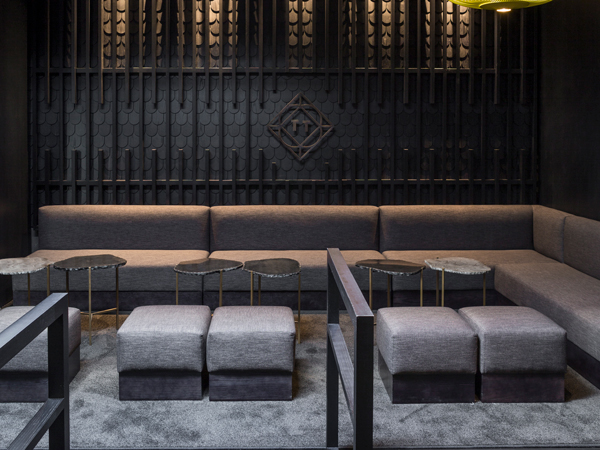 The moody lounge. Photo courtesy of the restaurant.