The Mojo Market is a development by trio Graeme Robinson, Tara Lerner and Robbie Lessem, who created the brightly coloured Mojo Hotel, which is located above the market. The 1700 m2 space, which will be a first for the Sea Point strip, promises a globally infused food offering with Asian, American and Mexican vendors in the mix. 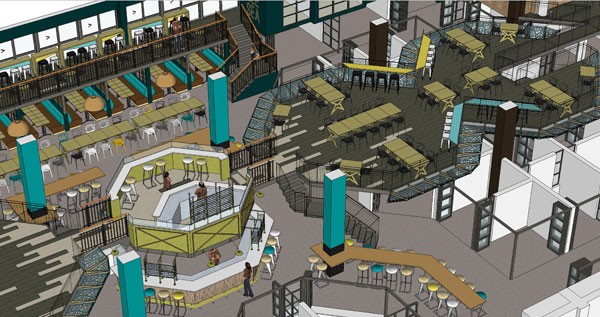 The designer’s rendition of the new Mojo Market in Sea Point. Image supplied.

Traders such as Earth Fire Pizza, The Codfather, Didi’s Burritos and Punjab Express have already signed up for stalls as well as Cape Point Bakery and fresh health juices by Pulp & Grind. In addition to this, and a first for the Atlantic Seaboard, American ice-cream brand Baskin-Robbins will be opening shop in the adjacent former-Kauai location as well as inside the market.

The Mojo Market’s look will be designed by Indigo Fusion and Jade and Ginja, and will draw inspiration from street and city markets across the world. Says owner Robbie Lessem, “We envisioned a diverse and interesting retail space that will reflect the colourful vibrancy of Sea Point life. We’ve opened up the ocean views and pulled elements of the surrounding deco architecture into a bright, open community space.” Traders positioned close to the street will also face outwards onto the pavement, creating ‘retail theatre’ for passers-by.

The market will have a soft launch in mid-April and will be open from 8am daily for early risers, with retailers and food vendors serving until 10pm and bars until 11pm. There will also be a 24-hour coffee shop available for hungry night owls and holidaymakers.