New steampunk-inspired gastropub from the team behind The Griffin

Rapidly on their way to creating a culinary empire, partners-in-dine Thomas Hughes and Martin Jakoby have recently opened their fourth venue, The Steamworks Gastropub, in Fourways, Johannesburg.

The two friends, whose stable also includes The Office in Greenside and Illovo eateries The Griffin and Perron, show no signs of showing down.

Thomas tells Eat Out that the aim with steampunk-inspired The Steamworks is to sell a complete experience. “We’re actually being quite greedy,” he jokes. “We want to take a whole Friday night from you. We know people generally go out for drinks at one place, followed by a meal somewhere else and perhaps to a bar afterwards – but we can offer all those stops in one extraordinary venue.” The gastropub is designed to be a “social space where people can come for drinks, or dinner, or to hang out,” Thomas says.

In terms of décor, the owners have an extravagant experience in mind. “We had everything custom made, from the chairs and the light fittings to the bar counters,” explains Thomas. There’s more than just a touch of fantasy to the space, thanks to quirky elements like the big clock-themed installation behind the bar. “The décor feels like a cross between the Sherlock Holmes series on BBC and the film Hugo.” 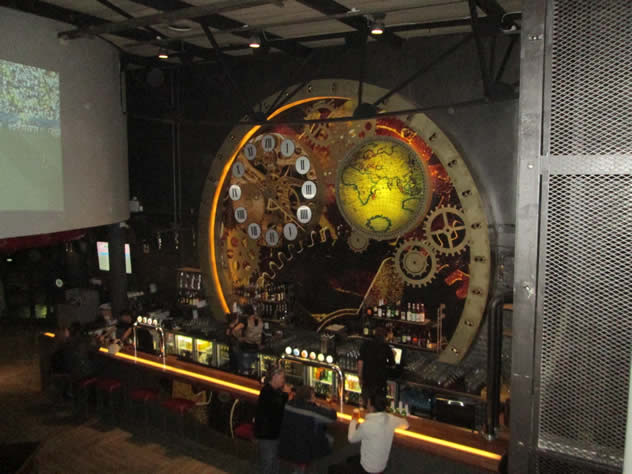 The bar at The Steamworks Gastropub. Photo courtesy of the restaurant.

As for the menu, customers can expect a contemporary South African take on modern British food. “We strive [for] quality; the menu is, as far as possible, seasonal and locally sourced from sustainable, free-range and organic producers. And, of course, prepped daily.”

Asked about further expansion, Thomas says that there are a few other projects in the pipeline, including a food truck in Johannesburg, which he hopes to have up and running soon. (Stay tuned to Eat Out for more information.)

Thomas, a qualified chef, spent a few years working in London before returning to South Africa in 2005 to try his hand in the local restaurant industry. He joined forces with his old friend Martin Jakoby, a doctor by training, and opened The Loft in Melville and The Attic in Parkhurst (both since sold), before moving on to the next culinary adventure. “We felt that there was so much opportunity in South Africa,” says Hughes. Clearly, they were right.

For more information about The Steamworks Gastropub, visit their listing.