We want plates: 25 of the worst serving decisions in history 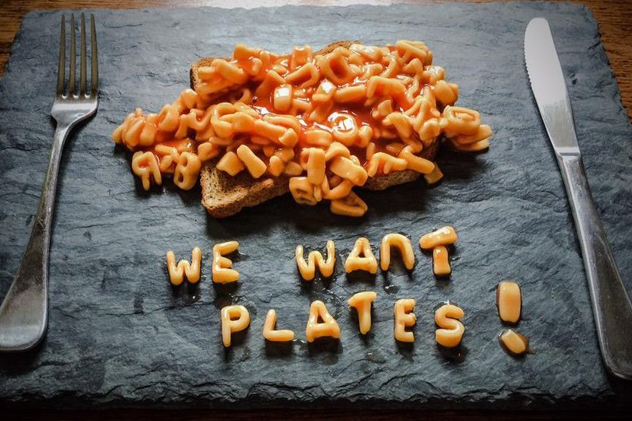 Tapas in teacups; oozing, deconstructed desserts on slate tiles; sidedishes trapped in awkward receptacles – the public has had enough! Calls are being made on social media to bring back the humble, purpose-built ceramic. We want plates!

Covering everything from trends that need to be retired (dank burger board, anyone?) to props that have no place on a table (yes, even swords), Twitter account @wewantplates is on the “crusade against serving food on bits of wood and roof slates, jam-jar drinks and chips in mugs”. We categorised some of the worst dining disasters.

Disaster 1: The rules of gravity, as evidenced when planks, boards and similar flat-crockery shams and liquid meet. Cue meltdown.

Centuries of plate-smashing catches up with Greece as crockery shortage leads to tzatziki/board woe.

If only someone would invent a round, ceramic vessel with a lip to prevent custard spillage. (Pic: @stakgeorge) pic.twitter.com/mQiuazdgD6 — We Want Plates (@WeWantPlates) January 23, 2016

If you’re off to @thebeaufortbath for dinner, be warned: things could get messy.

Disaster 2: Using glass to hold (hot) solids instead of liquids.

A reminder to all chefs during #BritishSausageWeek: sausage and mash does not belong in a glass. (Pic: @mickmcavoy) pic.twitter.com/nEr7zJ719m — We Want Plates (@WeWantPlates) November 4, 2015

Disaster 3: Bringing nature and the outdoors not just indoors but onto your table and in contact with your food for no sane or valuable reason.

Barcelona: Catalonia’s capital of gastronomy, where they stick your breakfast on a shovel. (Pic: @garethlangston) pic.twitter.com/RtMJHFlCjG — We Want Plates (@WeWantPlates) February 10, 2016

Perfect for launching back to the kitchen. (Pic. @ChenChatter) pic.twitter.com/Qw8v0Esbtt — We Want Plates (@WeWantPlates) January 2, 2016

Disaster 4: When fashion and food collide, making fashion victims of us all.

“Chef, The Four Horsemen of the Apocalypse have arrived, they’ve ordered the tempura shoe to share.”
(Pic: @eeketht) pic.twitter.com/8d0NCWhrSX

“What’s the soup of the day?”
“Cream of wild mushroom, with a hint of insole and corn plaster.”
(Pic: @simonraess) pic.twitter.com/ChaLTrcV0j

Disaster 5: The practice of insane, unappetising and quite frankly dangerous household upcycling.

Chicken fingers in a skull and a seashell of beans, coinciding with the bottom of a barrel.
(Pic: @jonnybadclobber) pic.twitter.com/NUUQ3236Yl

.@WeWantPlates Here’s the pork medallion dinner I had in Havana recently, served in a novelty urinal: pic.twitter.com/nTBZ68WiNI

It’s now also possible to spend unnecessary money to recreate this awkwardness for your friends and family at home:

Are you worried your friends don’t think you’re enough of a tosser? I think I’ve found the answer pic.twitter.com/QDa0VAtho7

Experienced your own unruly restaurant utensils? Share your stories with us on Twitter @Eat_Out. In fact, we think British comedy writer and actor John Finnimore sums it up pretty well: Put it on a plate!