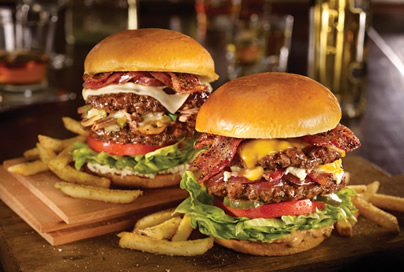 We sent Tank Lanning of Front Row Grunt fame to Franky’s in Sea Point to pit his giant appetite against their six-patty burger challenge.

In sporting parlance it went a little like this: Chubby – 1, Chunky – 0.

Chubby being the gargantuan six-patty burger served up at Franky’s Diner in Sea Point; Chunky being yours truly, the honorary life president of the Cheerful Chunkies – a bunch of sizable fellows seemingly purpose-built for taking on things like Franky’s Chubby Burger Challenge.

Franky’s is an authentic 50s-style diner that’s only been around for two months, yet is already steeped in a fair amount of folklore. Serving mouth-watering hamburgers, chips in red baskets and proper shakes (that come with a little extra in the metal container), this diner couldn’t be more 1950s if it tried.

Red vinyl stools line the counter in the middle of the brightly lit old-school diner that sports cool little booths with very new-school touch screens that can be used to surf the net or catch the game. The giant jukebox will pump out any tune you want at R2 a pop, while the kids get a free spin of candyfloss from hosts Saul and Franky. This place has a seriously cool vibe to it. 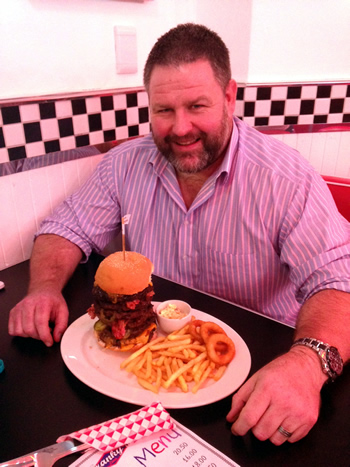 Tank Lanning about to eat his meal.

But I’m not there to taste the foot-long hotdogs, sloppy joes or corn dogs. My opponent is the monster Chubby Burger: six of Franky’s beef burger patties stacked on a roll with cheese, jalapeño peppers, bacon, lettuce, tomato, fried onions, dill pickles and mayo, served with chips, onion rings and coleslaw. This beast is not for ants!

The challenge is on the menu at R165, but get it down in 10 minutes or less and it’s free. Plus you get your name on the wall of fame and they throw in a T-shirt so you can brag about it at your next dinner party.

17 people have done it so far at a strike rate of about one in 10, says Big Saul of Saul’s Grill fame. With my name already on the wall at Saul’s – having smashed their 1.5kg burgersaurus a few years back – and given that a mate of mine polished off the Chubby in under eight minutes, I go into this challenge fairly confident…

I do the top roll, bacon, cheese and upper patty in two minutes; the bottom couple of patties and bun in just under five. At seven minutes 30 seconds, I’ve dispatched one more patty, the onion rings and coleslaw… but I have a call to make. The last two patties and chips in two minutes would be tight. Too tight, I decide, and raise the white flag. Chubby defeats Chunky.

For me, the test is not the amount of food – I could definitely have polished off those last two patties and chips – but getting it down in 10 minutes is the tricky part. Franky’s do not mess around with their burgers. Breadcrumb-free, these are proper all-beef patties that require some serious chewing. 10 minutes is a tough ask, but you can bet I’ll be back to give it another go.

The cherry on top was getting cola Wilson’s toffees instead of normal mints with the bill. That’s cool!

Have you been to Franky’s Diner (and tried the Chubby Burger Challenge)? Share your experience by writing a review.

Leave a Reply to The Burger master Cancel reply