Food
John’s travels are a clear influence on the light and vibrant menu that showcases elements of Thai, Vietnamese and Korean street-food cuisine. The menu, made for sharing, is small and changes frequently. Highlights include the bún thịt nướng (a light salad with cold rice), vermicelli noodles, mini pork skewers, fresh herbs and cucumber finished off with a zingy and moreish dressing (a winner). The tom kha kai coconut broth with tomato and mushrooms has very subtle, especially in comparison to punchier dishes on the menu like the sensational tuna tataki with a cucumber and orange miso emulsion.

Other popular options from the latest menu include an intensely flavoured fish taco with a curry emulsion and a tangy tamarind dressing that makes your taste buds hum. The Persian lamb flatbread is meaty and moreish, enhanced with creamy hummus and a cooling cucumber raita. Meat-lovers will want to place a second order. If you can’t decide what you want, go for ‘one of everything’ option on the menu (seven dishes for R550).

But don’t forget to save space for chef van Zyl’s affogato or a portion of piping hot churros with chocolate sauce.

Drinks
The drinks list is concise, with some enticing options. Summer calls for a glass (or bottle!) of the crisp and light Spider Pig Bro-Zay rosé or a refreshing locally brewed lager.

Service
Service is personal and friendly but sometimes detached, with little explanation of the ordering system or menu.

Ambience
The simple but functional space, with its long cafeteria-style wooden benches, has an unpretentious and laid-back energy. It’s light and airy, with pops of greenery and large Victorian windows looking out onto Cape Town’s busy Wale Street.

Best for…
A casual catch-up with friends or a spontaneous date night. 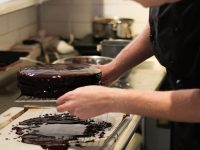 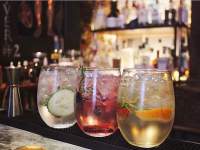 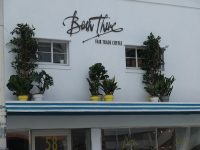