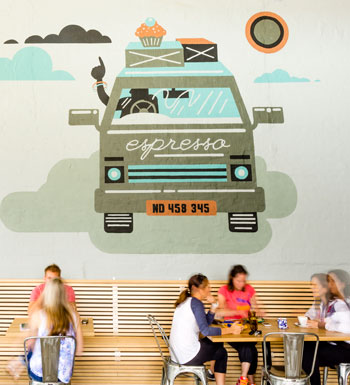 The mural by illustrator and graphic designer Wesley Van Eeden. Photo courtesy of the restaurant.

Our next nominee for the 2015 Boschendal Style Award is Boiler Room Café, owned by the team behind 9th Avenue Bistro. Gina and Graham Neilson have brought a playful, trendy eatery to the Durban food scene. Here’s why Boiler Room Café deserves its nomination.

With a winning formula over at the fine-dining 9th Avenue, Graham and Gina wanted to create a new concept that was more personal to them. Explains Gina, “We visited Sydney and went to many amazing restaurants, and upon coming home we started looking for a space on which we could put our own creative stamp.” The space they found was in the old Lion Match factory, which has been converted into an office park. JT Ross has its offices there and was in need of a canteen, and that is how Boiler Room Café was born. 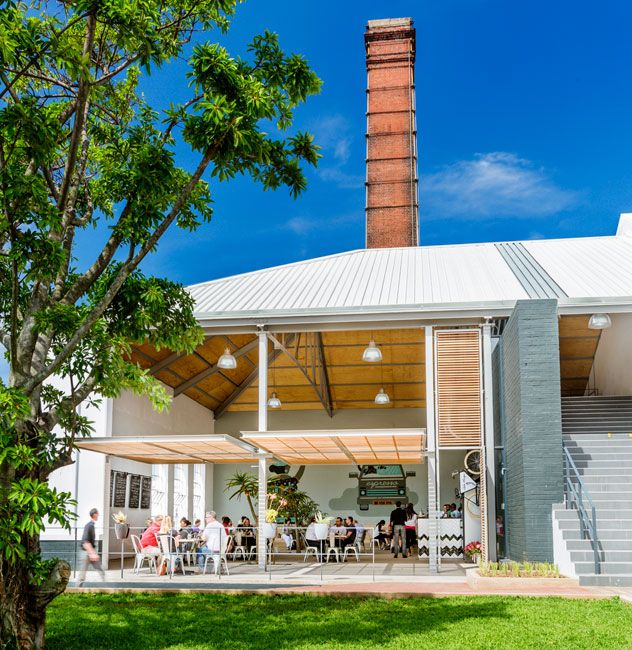 The view from outside. Photo courtesy of the restaurant.

Located in the former boiler room of the factory, which dates back to 1925, the eatery’s interior was inspired by a trendy Sydney café called The Grounds of Alexandria. Dean Jay Architects designed the large open-plan space with grand wooden and steel doors to give it an unusual outdoor feel. JT Ross had planted trees in the middle of the space in the hopes that one day they will tower over the restaurant floor and bring outdoor elements indoors. 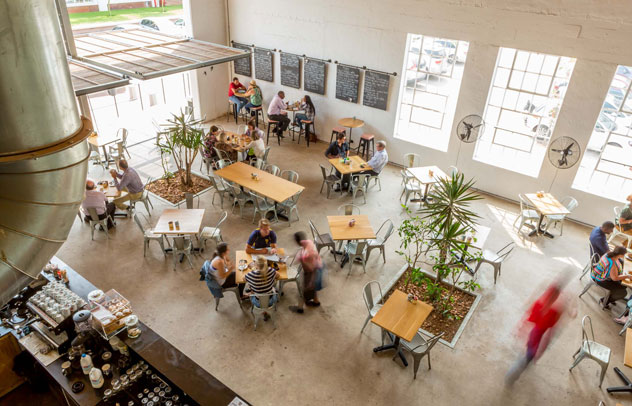 The view from above. Photo courtesy of the restaurant.

A long wooden park bench lining the wall was crafted as a playful touch to give guests the feeling that they are outside in a park. Quirky elements include a jar overflowing with sunglasses for diners to borrow on sunny days. A bicycle hangs from the black brick wall and chalkboard menus offer diners a bistro-style experience.

Illustrator and graphic designer Wesley Van Eeden painted a vibrant wall mural to capture the essence of Durban as well as three one-metre pillows to illustrate the journey from Durban Harbour to Umhlanga. The vast industrial space has been turned into a youthful, fresh eatery that exudes warmth.

A pulled pork burger. Photo courtesy of the restaurant.

Chef Graham Neilson loves the idea of “no rules in the kitchen”, and changes the menu as often as he likes as a way of keeping things fresh and exciting. At the moment the food draws inspiration from Mexican and American cuisine, as the Neilsons used to live in Miami and fell in love with the food there. Dishes include Cajun pork quesadillas with gorgonzola and coleslaw, fish tacos, and for Saturday brunch chorizo scotch eggs or a bacon dagwood.

One of the main attractions on the menu is the range of decadent gourmet milkshakes, with flavours such as miso and butterscotch, and lemon meringue.

Does Boiler Room Cafe have what it takes to win the 2015 Boschendal Style Award? We’ll find out at the Eat Out Mercedes-Benz Restaurant Awards in November. Stay tuned to see our other nominees.