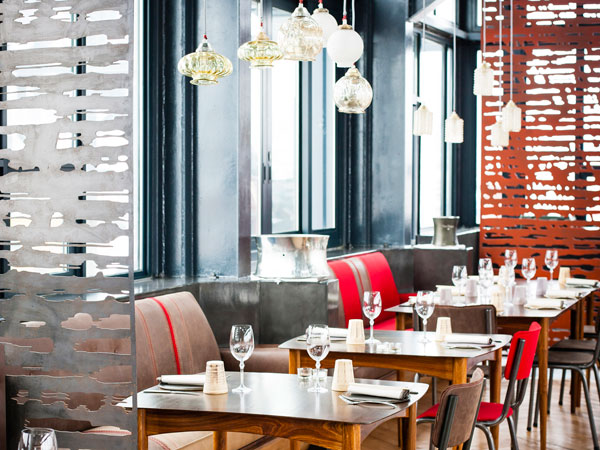 Our latest nominee for the 2015 Boschendal Style Award is The Pot Luck Club. This effortlessly edgy and extremely popular restaurant is situated at the Old Biscuit Mill in Woodstock and was conceptualized by the award-winning chef and owner Luke Dale-Roberts. The industrial-chic style of the restaurant alongside the made-to-share cuisine takes tapas dining to new heights. Here’s why The Pot Luck Club deserves its nomination.

Situated on the top floor of the Silo of the Old Biscuit Mill, Luke collaborated with renowned Cape Town based architect Greg Scot along with some of the city’s foremost art and design personalities to bring a trendy space with breathtaking views. The design collaborators include Peter Eastman, Otto du Plessis, Egon Tania, Starry Eve Collett, Lawrence Friedman, Andrew Lawrence Gibson as well as Luke’s talented wife Sandalene who designed the eye-catching and stylish waiter uniforms. 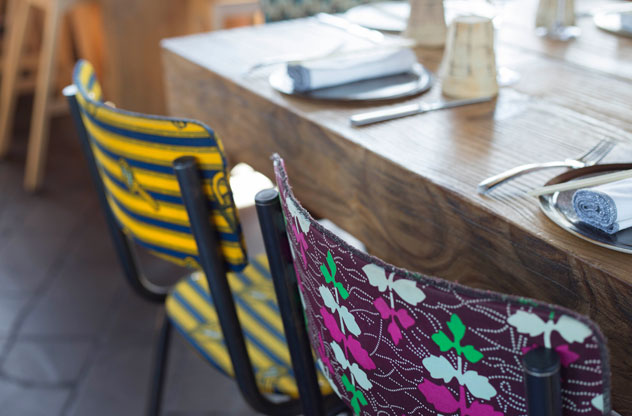 Taking the glass lift to the sixth level, diners are greeted by picturesque sights of the mountain and surrounding city. The entrance to the restaurant boasts a custom-made Otto du Plessis bronze manhole with its wild boar motif, now synonymous with the Pot Luck branding. Stepping out of the lift onto a cobbled ‘street’, diners are then welcomed by sleek, covetable herringbone chestnut floors. 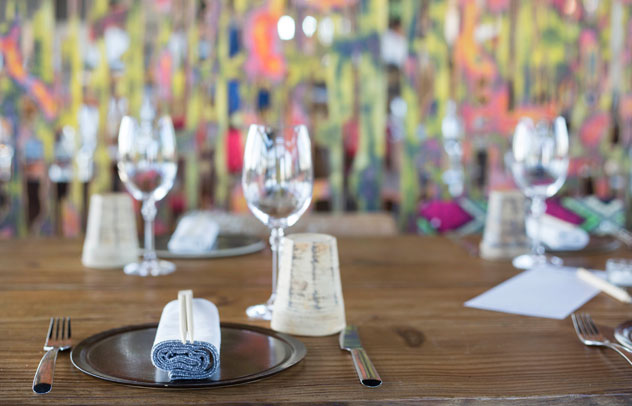 Custom-made screens divvy up the space and add a pop of colour. Photo courtesy of the restaurant.

The focal point of the space, which has become signatory to Luke and Sandalene’s restaurants, is the open plan kitchen. Studio lighting that gives the impression of a culinary stage illuminates it. The kitchen is equipped with a grand 1.4 metre Robatta grill and range of power woks. These elements not only impart authentic flavours on the restaurant’s hot dishes, but also add to the eclectic atmosphere. 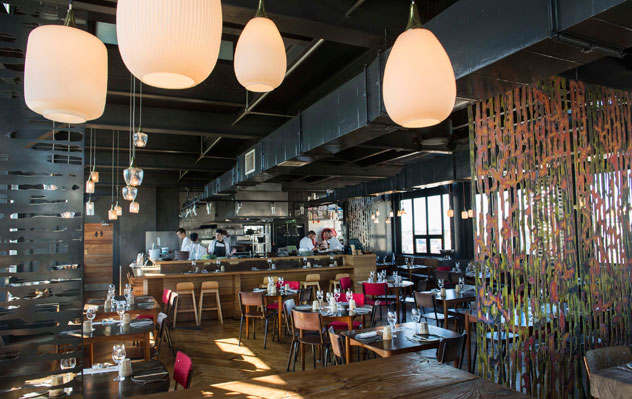 The open plan kitchen is very much a part of the space. Photo courtesy of the restaurant.

When asked about the design concept behind The Pot Luck Club, Luke explained, “The original Pot Luck creation was about sharing; a genuine philosophy that has been carried through to the design and concept with the space where my collaborators on the project have become my friends. My wife Sandalene also remains a constant source of inspiration, imagining anything from the ‘Pot Luck Ping pong League’ to Japanese print dresses to the look of the venue’s stylish hostesses. The out-of-the-box ideas and advice from all the players on the project is what gives this restaurant true soul. Architect Greg Scot and his designer Nina Sierra have brilliantly pulled this whole project together and their attention to detail has been remarkable”. 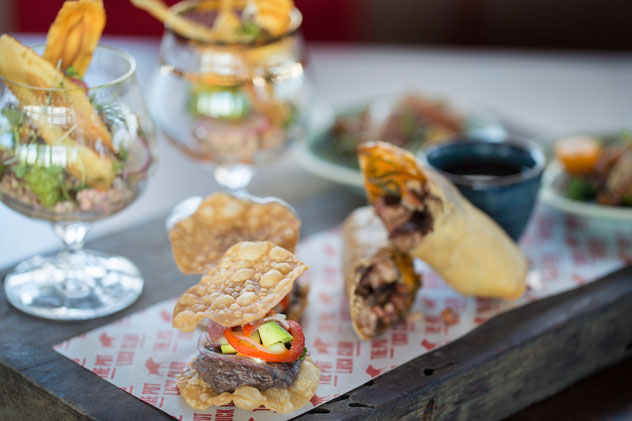 Tapas at The Pot Luck Club. Photo courtesy of the restaurant.

Offering plates of tapas that are designed to be shared, the menu is organised according to five tastes: salty, sour, bitter, sweet and umami. Inspired by global flavours of South America, Europe, Asia and Africa, the bold yet accessible dishes have been devised by Luke Dale-Roberts and executed by head chef Wesley Randles. The stand out favourites on the menu include the legendary fish tacos with tender, zingy ceviche that is sandwiched between two small, crunchy shells and fused together with black bean purée, guacamole and pickles. Their most popular drink is the vibrant DIY Bloody Mary where guests craft their own drink with flavoured vodkas, candied bacon, radishes, cucumber and even a squeeze of sriracha.

Does The Pot Luck Club have what it takes to win the 2015 Boschendal Style Award? We’ll reveal the winner at the 2015 Eat Out Mercedes-Benz Restaurant Awards on Sunday 15 November.