The idea of putting pineapple on pizza might be one of the most divisive foodie debates. In fact, the pizza topping is so controversial, Gordon Ramsay claimed it as one of his most hated foods and even the president of Iceland wanted to ban it. All this aside, there are still those who are #teampineapple and we’re not here to judge. So, if you like your slice with the contrast of tangy fruit to the saltiness of ham and gooey cheese, here’s where you can get your fix in Cape Town.

One of the Mojo Market’s most popular food hatches is Earthfire Pizza. The bases are unbelievably thin and fly out of the ovens at a rapid pace. While the classic margherita always hits the spot, tropical fruit fans can indulge their cravings with a topping of fresh pineapple served in the classic Hawaiian style. This uber thin beauty comes topped with salty gypsy ham and gooey mozzarella (R80). If you’re after something a little different to your usual order, go for the smoked chicken pizza topped with mushrooms, chicken, peppadews and mozzarella, then add some tang with extra pineapple.

This gem in Obs serves authentic, homemade pizzas in an energetic and fun setting. Order from the quirky menu that offers a range of different and exciting toppings. Pizzas are wood-fired and made with proper Italian flour, tomato and the freshest ingredients. The Kimonster (named after one of of the owners, Kimon Bisogno) was added to the menu after Kimon lived in Italy. While there she would often crave a taste of home, particularly the taste of pineapple pizza, but the Italian chefs would often say “No siamo Inghilterra”, meaning “We are not in England!”. The Kimonster pizza is topped with fresh pineapple and spicy salami for an extra kick (R95). If you’re a veggie, opt for mushrooms and capers, as per Kimon’s suggestion.

Bree Street’s uber hip pizza spot doesn’t shy away from unusual toppings. The team has recently added two new pies to their menu, one of which features a good dose of pineapple chunks. The Mahalo pizza (R144 for a large) features juicy pineapple, salty lardons and some tangy pickled jalapeños for good measure. There is also the option to add on some chicken to take things up a notch. 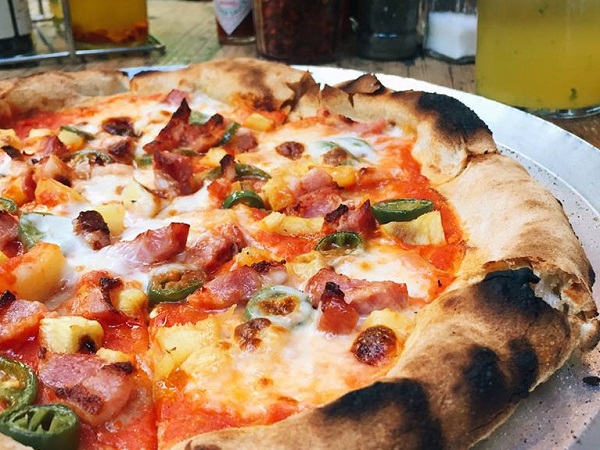 This Hout Bay Italian gem is famous for its glorious wood-fired pizza made with fior di latte mozzarella. On the long list of options, the Suocera (Hawaiian) pizza will keep pineapple lovers happy. The Suocera, which means mother-in-law in Italian, is named after Massimo’s own mother-in-law, as it’s her choice of pizza. The cheesy treat comes topped with the classic tomato base, fior di latte mozzarella, pineapple, and gypsy ham for R89.

It’s no surprise that this Sea Point stalwart makes a mean Hawaiian pizza. From the thin, wood-fired base to the stringy golden cheese, their pizzas never disappoint. If you’re looking for a more generous helping of the tangy tropical fruit, these guys have got it down. The pizza is served as a classic Hawaiian with ham and pineapple (R94). For something a little extra, add on chilli and avo.