A dummy’s guide to sparkling wines 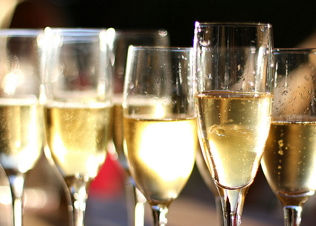 The summer season is approaching and, along with it, many occasions to be celebrated with a glass or two of bubbly – such as, you know, the end of the day, or even the start of one. There’s nothing more festive than sipping from a flute of crisp sparkles, letting the bubbles tickle your tongue and the back of your throat as they go down. But do you know what doux means? How about cuvée, lees and mousse? While it’s fun popping those corks, we thought we’d put together the dummy’s guide to sparkling wine.

A glass of bubbly is the height of sophistication, but do we know what we’re actually drinking? Champagne, Methode Cap Classique (MCC), bubbly and sparkling wine are the common names for sparkling wine known to us in South Africa. The bottles are classified according to the wine’s origin, and the method used to make it.

In France, sparkling wine is produced from grapes grown in the Champagne region, using secondary fermentation of the wine in the bottle to create that characteristic carbonation.

In South Africa we use the same traditional method to make sparkling wine, but call it Methode Cap Classique or MCC, because international use of the word ‘champagne’ is no longer allowed. According to the Cap Classique Producers Association, which promotes South Africa’s premium MCC wines and the common interests of the producers, the classic art of winemaking was introduced to the Cape by the French Huguenots, and the first bottle-fermented sparkling wine produced at the Cape was called Kaapse Vonkel or Cape Sparkle. (Click here to see a list of the producers of MCCs who are members of the association.)

Some winemakers produce a non-MCC sparkling wine, which is simply fizzed up with bubbles by injecting carbon dioxide into the wine. (A bit like a SodaStream.) This is a faster and cheaper method, which also allows those who’d prefer to avoid yeast to have a celebratory glass of bubbly.

Put a bubble in it

So, how exactly does MCC get its trademark fizz? It begins its life in the same way as a still wine. The grapes used for MCC are usually picked early so that the alcohol and sugar percentages are low, and the winemaker selects grapes and tailors processes according to the type of bubbly being made. The base wine is then placed in steel tanks at about 19 degrees Celsius.

Karen Loubser from Silverthorn Wines explains that when the base wine is bottled, yeast and sugar are added. The sweetness of sparkling wine can range from very dry “brut” styles to sweeter “doux” variations. The wine is then capped with crown caps. As the yeast works on the sugar, the carbon dioxide that’s released is trapped inside the wine. This is called the lees process and it takes a minimum of twelve months.

“The longer the wine is leesed, the richer the character of the wine becomes and the finer the bubbles become,” Karen says. The bottles are turned regularly, and then raised slightly, so that after two weeks the wine is upside-down, and the lees are lodged in the neck. After the yeast is removed, MCCs are corked and left to mature, preferably for a minimum of six months in order for the wine to settle.

Elunda Basson is on the board of the Cap Classique Producers Association and a wine maker at Distell. She tells us about some of the rules wine has to meet in order to be classified as an MCC: “The grapes need to be hand-picked and processed whole bunch. We only use the first and best free running juice, the “cuvée”, for basis wines and the wine must go through a secondary bottle fermentation. By law, the wine must age for a minimum of nine months in the bottle before it may be distributed to the market.”

Get the most of your tiny bubbles (so divine)

Neil Grant, former sommelier at the award winning Rust en Vrede Estate and current owner of Italian eatery Burrata, insists that sparkling wine should always be drunk “chilled and out of quality glassware”. He says that when choosing a bubbly, think about your budget, what sort of style you prefer (dry, extra dry, off-dry or rosé) and whether the bottle is being bought to make a certain impression or just for enjoyment. “This will lead to the right choice,” he says.

What do sommeliers like to sip themselves? Grant says that if your budget allows for the real deal, Krug, Jean Vesselle, Egly-Ouriet, Pierre Gimmonett and Philipponnat champagnes are good choices, while Silverthorn (rosé and blanc de blanc), Graham Beck rosé, Villiera Monro and Colmant are all great MCCs. West Ngcwabe, sommelier at The Rambling Vine, enjoys the Billecart Salmon Brut Reserve and local Silverthorn Brut. Gareth Ferreira, The Saxon Boutique Hotel’s personal favourites include the lasting finish of the NV De Wetshof Methode Cap Classique Brut and the NV Louis Roederer Brut Premier Champagne, well known for its prestige cuvee, Cristal. He also enjoys the NV Larmandier-Bernier Blanc de Blanc champagne from the premier cru village of Vertus. “This dry champagne is always at the top of my list when it comes to champagne with food, be it oysters, canapés, light seafood salads and ceviche. The great minerality with balanced acidity is a stand-out point for me,” Gareth says.

At home, pair sparkling wine with fresh fruit, cheese and different compotes or try it with a pizza topped with salmon and cream cheese. Bubbles also go beautifully with baked fish dishes or crayfish on the braai – the smokiness from the fire is rounded off nicely with mousse of the sparkling wine. If these ideas have awoken your appetite for a meal with some bubbles to match, book a Sunday lunch at Savour where the buffet is accompanied by unlimited glasses of Graham Beck Methode Cap Classique for R495 per person.

Brut – Containing between 0 and 12 grams of sugar per litre, this type of sparkling wine should present no sweetness.
Cuvée – derived from the French word cuve which means vat or tank. For the purpose of sparkling wine it refers to wines that have been selected from vats of higher quality.
Cru – A French wine term for the word “growth”. It is used to show an exclusively named and legally defined vineyard.
Doux – very sweet.
Dry – not sweet (brut).
Fermentation – the process of using yeast to create carbonation (bubbles).
Lees – deposits of remaining yeast and other particles that precipitate to the bottom of a vat of wine after fermentation and aging.
MCC – Methode Cap Classique, a term for wine made in the champagne style in South Africa.
Minerality – as a quality of wine, it signifies a pleasant acidity and a certain rigour.
Mousse – refers to the fizziness of the wine.
Sparkling wine – any wine that has bubbles in it.