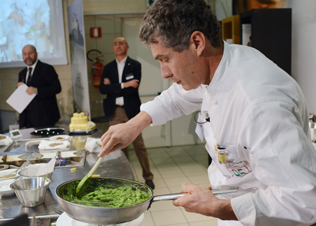 “Simplicity was the key. I presented a recipe that is very cheap but very tasty,” said Nava, after his victory. “Others competed with expensive fish-based recipes but right now, given the economic situation in Italy, it did not seem right to come forward with extravagant dishes.”

The event, which took place on Saturday 12 June 2013 at the Barilla Food Academy in Parma, saw 24 chefs from around the world take part in demonstrations and cooking challenges.