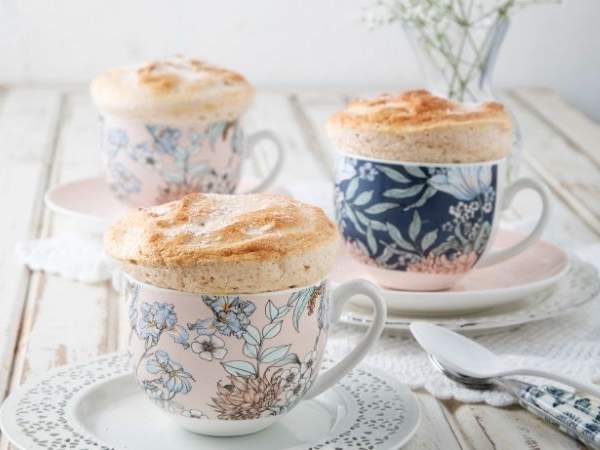 For creme patisserie base:

For the milk tart base:

To make the crème patisserie base:

Bring the milk to a boil.

In a bowl, cream the yolks, castor sugar and corn flour until the mixture is white and airy.

Now pour the hot milk over the egg mixture and whisk thoroughly.

Strain the mixture back into a pot and whisk constantly over medium heat until thick. Pour into a container and set aside to cool.

For the milk tart base:

In a saucepan, gently bring the milk with lemon rind, sugar and ground cinnamon to a simmer over a medium heat.

Cream the egg, cake flour, corn flour and salt together until white and airy.

Strain the milk mixture and melt the butter into the milk. Pour hot milk over the egg mixture and whisk through.

Put the mixture back on the stove over medium heat and stir constantly until thick. Pour into a container and set aside to cool.

Cool both the bases down with a layer of plastic wrap pushed onto it, to prevent a skin forming.

You can use large ramekins or ovenproof coffee mugs of 250 ml capacity – brush with a thin layer of soft butter. Refrigerate until the butter hardens.

Combine the two cooled custard bases in a large bowl and whisk together until smooth.

Start whisking the egg whites in a stand mixer until soft peaks form. Add the 3/4 cup castor sugar slowly and whisk at high speed until a firm, smooth meringue has formed.

Be careful not to over-whisk the meringue to a dry stage.

Immediately scoop into the prepared moulds, being careful not to mess on the sides.

I like to leave the top of the soufflé quite rough, as it gives this majestic light dessert a homey feel.

Knock the soufflés down gently to remove any air pockets. If any of the mixture spills onto the rim, clean it off.

Bake immediately for 8–10 minutes until well-risen and golden brown. Dust with a mixture of icing sugar and ground cinnamon and serve straight from the oven.