Cheyne’s: A taste of the Pacific in Hout Bay 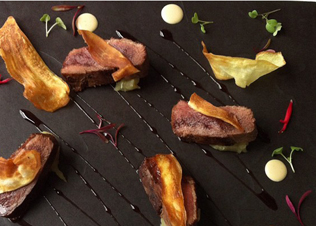 When was the last time your face looked like this? As adults, it’s usually only when we travel that we get to taste something new (and sometimes it can take some getting used to, as Eat Out editor-in-chief Anelde found in Thailand). But at Cheyne’s in Hout Bay, you might just find it happening again.

The tiny 25-seater restaurant opened up just three months ago, but already it’s earning quite a reputation for unique cuisine layered with the flavours of the Pacific Rim. Dishes are laced with miso, coconut cream, tamarind, mirin, sake, rice wine vinegar and star anise; and are all delivered in a host of textures and temperatures. You might recognise the name Cheyne Morrisby from Franschhoek Kitchen and the now-closed Cheyne’s on Bree Street, but it’s the time the South African-born chef spent living and working in Malaysia, Thaliand and Indonesia that defines his culinary style today. “I wanted to learn what makes Thai cuisine bang, to get those flavours right,” he explains. During this time he called Bangkok, Chiang Mai, Koh Chang, Koh Tau and Ubud and the Gili Islands in Indonesia home. “There is definitely a language barrier, but once you learn the basics it gets easier.”

The chef has been pleasantly surprised by the support for his new eatery, “Hout Bay was always overlooked, but in the past four or five months I’ve seen some big changes,” says Cheyne. “The restaurant has taken off massively.” Currently, he’s examining the possibility of expanding to hold 45 guests, with the addition of a Japanese-style bar.

Imagine tempura coconut milk (if you can): perfectly crispy tempura batter with squares of soft, coconutty cream in the centre, served with pickled beetroot. Or a wonton ‘sandwich’ of tender crayfish layered between shards of wonton pastry, Japanese mayonnaise and spices you’d normally find on sushi.

Meaty main dishes are done to a turn: the pulled lamb and teriyaki pie with aubergine tempura is sublimely succulent and richly flavoured; and the grilled pork belly comes with a sweet and tangy corn-and-cumin purée, coconut dumplings and sticky maple and soy sauce. There’s also a 48-hour beef short rib dish, which sounds incredible. The one downside to all this magnificent meat is that there’s not much to please vegetarians on the main menu.

For dessert, try the intense white chocolate and toasted sesame semi freddo, which works beautifully with hot banana tempura. There’s also a buttery, fried apple pie dusted in cinnamon sugar so that it takes on the persona of a piping hot crispy pancake, with sour cream ice cream and hazelnuts.

All in all, Cheyne’s serves up delicious and different food, and with mains ranging between R70 and R125, excellent value for money, too.

A surprisingly well-priced list, with the majority of the wines available by the glass, around the R30-R35 mark.

This tiny hole in the wall has plenty atmosphere to go around. Low lighting (perhaps too low in the couch area) and candlelight make for a romantic mood. You’ll need to go through the tiny kitchen to get to the toilet, which is in a separate room outside. It may sound odd, but it kind of adds to the experience.

Our bill came with a little ball of coconut ice, coated in white chocolate – a far cry from the usual desultory mint.

Have you been to Cheyne’s? Let us know what you thought by writing a quick review.