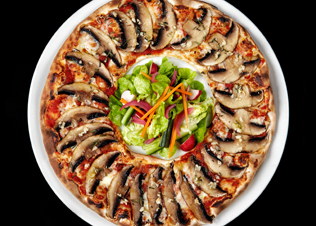 It’s one of the most popular dishes in the world and, judging by the stats on our site, one of SA’s favourites, too. But, much as we try to ignore it, pizza is perhaps not always the healthiest choice. Now you can have your Strega and eat it, thanks to a new healthier range of pizzas by Col’Cacchio.

Called the Foro range – Italian for ‘hole’ – these pizzas are designed with a hole in the middle that’s filled with salad, and weigh in at under 515 calories (or 2000 kilojoules).

“The last few years have seen a dramatic increase in the number of people making real lifestyle changes, and making a renewed commitment to eating right,” says Kinga Baranowska, head of menu development at the restaurant group, and one of the directors of Col’Cacchio holdings.

Last year’s Unilever Food Solutions World Menu Report found that consumers were asking for more nutritional information, and for transparency when it came to that information.

So how does that compare to an ordinary pizza?

“It really depends on the type of pizza toppings you choose,” says Kinga, “but I guess you could say that an average pizza would work out to 5400 kilojoules.” That’s rather a lot, if you consider that a sedentary female needs only 7367 kilojoules for an entire day. (It’s 9240 for an active female, while men require 9421 if sedentary and 11 760 if they’re active.)

“The base is made in the same way, but it has to be rolled out much thinner. The quantity of dough also has to be far less.” They’re also slightly smaller than the regular pizza size (28 cm not 31 cm) and while the same mozzarella cheese is used, it’s cut down to 1/3 of the cheese used on their ordinary pizzas. “The salad in the middle was designed to add more dietary fibre to complete the meal,” adds Kinga.

Perfectly tasty. The salad – with radishes, cucumber, carrot ribbons, and fresh leaves – adds a lovely crunch to the pizza, and we leave feeling pleasantly satisfied, rather than overfed and guilty.
Not convinced? Make an informed decision with Col’Cacchio’s nutritional information.

For more ideas on healthy eating out, check out our guide to eating out without putting on the pounds.