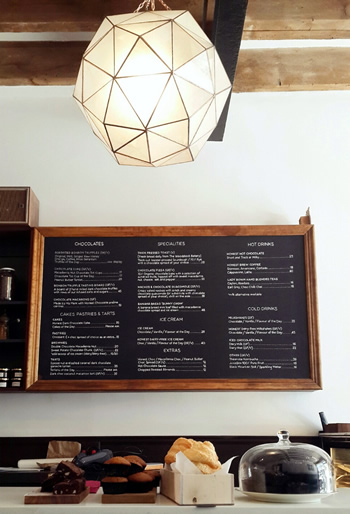 The sit-down café offers an array of decadent chocolate truffles, cakes and tarts, alongside speciality menu items such as a banana bread ‘bunny chow’ filled with macadamia chocolate spread and ice cream (owner Anthony’s favourite); a chocolate pizza with a 72% cocoa organic chocolate base with sundried fruits and sweet macadamia nut ‘cheese’; and nachos with chocolate guacamole and chilli on the side. Also included are a number of hot and cold beverages, including Honest hot chocolate, dairy-free milkshakes and iced chocolate milk. “Opening an Honest Chocolate Café has been something we wanted to do since the first year of our business,” says owner Anthony Gird, who launched the first Honest Chocolate store in Woodstock with Michael de Klerk in 2011.

The café opened just in time to accommodate the crowds attending Cape Town’s popular First Thursdays, a monthly artistic and cultural event held in the city centre. “The reaction was phenomenal and the café was packed. People have been raving about it already,” says Anthony. The Honest Chocolate Café has enjoyed enormous support from the community, with a portion of the funding for the café obtained through a crowd-funding campaign launched in mid-July 2014.

Watch this space for news about the official launch of Honest Chocolate Café.