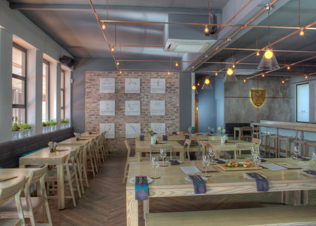 There’s a sleek, new gastropub at Illovo Junction complete with street-level bar, open till late, more craft beers than you can shake a stick at, and an upstairs area for dining. Hennie Fisher puts The Griffin through its paces.

?What sublime food is hiding away here, waiting to be sampled by corporate and hip Johannesburgers while debating the virtues of one craft beer over another? Chef patron Tom Hughes is fully in control of his menu, not only in terms of design and conceptualisation but also execution and presentation. The food is fun, accessible and hugely yummy; even that old stalwart, the burger, fully deserves the exclamations from satisfied diners that this may well be the best in town. The Griffin burger is made from hand-ground mince consisting of brisket, sirloin and oxtail, and is served simply with gherkins, mayonnaise and crisp, delicious fries. The menu covers starters, mains, sides of veggies and starches, puddings, bar snacks, platters, salads, sandwiches, and roasts and a kiddies’ menu (both only available on weekends). Whether you call it gastro-pub or bistro, this is good food at every level.

The veggie platter pays creative tribute to good produce, including items like gruyere and onion tart; asparagus with herb mayo; cocktail tomato and mozzarella skewers; tortilla chips and guacamole; crystal spring rolls; and grilled goats cheese bruschetta with olive tapenade. Scottish salmon fishcakes with tarragon and dill nestle on baby spinach with lemon butter; the Asian seared tuna salad with shiitake mushrooms, coriander, and a mint and chilli lime dressing is light, delicious and cooked to perfection, while steaks are simple and unadorned but expertly done. The Sunday roasts alternate between chicken with sage and onion; roast leg of lamb with home-made mint jelly; beef rib with Yorkshire pud; and pork belly with red cabbage and crackling.

?From craft beers to cocktails and selected boutique wines, The Griffin aims to offer something different at every level. Craft beers include Lucky Beer, Citizen Alliance, Jonny’s Cumberland Ale, Joseph Holt Maplemoon and many, many more. The list of craft whiskeys (such as Salty Old Dog) gives a nod to the latest hot trend, while the cocktail list features traditional as well as new and interesting variations on classics such as a June Bug or a Gingerbread Mule. The wine list also features an extensive range of carefully considered wines, among them Solo Viognier, Rustenburg John X Merriman and Pinotage Allée Bleue.

?While no dress code is specified, one will blend in much easier looking the part of an up-and-coming young Johannesburg executive, and the beautiful space and good food calls for a well-dressed crowd of bright young things to play up its positive aspects. The waiters are extremely efficient, competent and generally in command of a space that could easily become unmanageably crowded and full. Our super-competent waiter, Diego, had more than a passing understanding of the menu and was able to offer informed suggestions. Even though we arrived early, the space was already pumping and while one could worry that orders would take time to arrive, the food was presented in good time. Following Diego’s suggestion we shared a veggie platter to snack on, which was truly delicious.

Entrance is gained at street-level into an intimate and smartly appointed bar, past a formidable looking bouncer. The real action is upstairs, where after-work drinks easily flow into dinner.The Griffin is situated on the corner of Oxford Road and Corlett Drive, one of a strip of increasingly hip and happening Johannesburg venues. The entrance bar area on street-level is slightly more intimate and therefore less noisy, making for easier conversation and people watching: everybody arriving and leaving passes through here. Turquoise, polished red copper and thick glass décor elements set a stylish tone (despite the obligatory TV screens for monitoring the latest sports happenings), while not sacrificing any of the modern edginess. The upstairs dining area consists of a large room with a variety of large tables (sometimes requiring people to share) and smaller tables along the edge of the room, all overlooked by a large bar counter. An enclosed verandah serves as the smoking section.

Fresh flowers, focused attention to detail by the staff and the other owner, Martin Jakoby, good food and a great selection of beverages make for more than your average establishment.

Have you been to The Griffin? Write us a review.