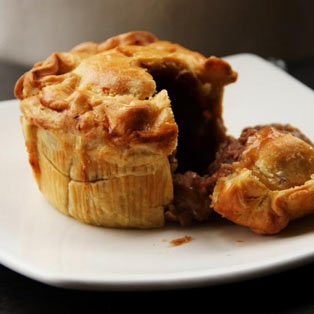 It might seem like a slightly risky business plan: expanding in the middle of a recession. Something only the crazy – or those with superpowers – would think to attempt. But then there is an air of the superhero about baker, Jason Lilley. With bulging biceps and his ‘Captain Bread’ Twitter handle, Jason is the man behind what used to be called Jardine Bakery. It’s home to the bacon croissants and chocolate brownies whose names are whispered in hushed tones around our office.

Earlier in the year, after Jardine restaurant closed, the bakery became ‘Jason Bakery’. And at the beginning of August, Jason expanded next door into the old Jardine space. Promising a holy trinity of beer, bread and bubbles, the new area is intended to be a breakfast and lunch spot that showcases all things doughy. These are no ordinary sandwiches: opening night saw innovations like bunny chow (brioche with confit rabbit) and croc monsieur (smoked crocodile tail with gruyere béchamel on rye) served by Jason.
Thus far, it seems the expansion is going rather well. Drive down Bree Street any morning and all the little bar stools out on the pavement outside Jason will be occupied. Standing at the new hatch, which opens into Bree, is an ever-present queue of hungry businesspeople, hipsters and bacon croissant fans.
We head down there one chilly, grey lunchtime to give it the official taste test. The cosy inside seats are all taken, so we perch on the bar stools outside and watch the bustling street as we await our lunch.
First up is the soup of the day, baby spinach (R25). As it is dubbed ‘cup of luv’, I’m not expecting the deep bowl of thick, green soup. It’s topped with a piece of special toast and drizzled with olive oil. Even though I’d never have thought of making a soup from spinach, it’s rather tasty.
Since it’s freezing, we dispense with the beer and bubbles and order hot chocolate (R20). They’re not quite the real chocolate variety, but are foamy and warm, and come with a tasty little biscuit to nibble on.
Next, there is sublime, slow-roasted lamb on ciabatta (R45) with hummus, homemade tzatziki and zhough (green chilli paste). Technically, it belongs to Linda, our copy editor, but I get to taste a little bite and can vouch for it. This is a seriously good sandwich.
The pièce de résistance, however, is a Chalmar veal and kidney pie (R28). Wrapped in beautiful golden pastry, the veal is tender and the gravy rich and thick.
Chatting to Jason afterwards, I observe that it seems to be going rather well; despite the chilly day, even the outside tables are full. “It’s become a party,” he tells me. “Some nights it goes on pretty late. On Friday night we were open until 1:00am”.
Into bed at one, and up again at five to bake? Definitely a superhero!
We joined Jason in the early hours of the morning to learn how he bakes bread. Visit our sister site, Eat In, for that story!
By Katharine Jacobs