A love letter to my Jewish grandmother’s soup recipe

I grew up with a Jewish father and a somewhat-Christian mother. While we weren’t officially Jewish, my upbringing was decidedly Jewish. We spent Friday nights at my grandmother and aunt’s houses, observing shabbat as well as most Jewish holidays, although sometimes we were there for the food more than for religious reasons. In short, the Jewish influence on my life was very present.

There is a long line of talented cooks on both sides of my family, but none more so than my Jewish grandmother. Poem Poem, as she’s affectionately known, is a force to be reckoned with in and out of the kitchen and – at 82 years young – she can’t be stopped. Throughout my childhood, I remember her making the most delicious dishes. Her scones and meringues are legendary and, on special occasions (if you asked very nicely), she would lovingly make canapé-sized latkes. Her cheesecake, too, is out of this world. She was the first person I remember making me cous cous that I actually enjoyed and, though she is a pescatarian, she makes a mean chicken soup and braises brisket like no one else.

Between braided kitke, crispy latkes and, of course, bagels, Jewish food has some real homeruns. There is one dish, however, that has stuck with me through all these years: my grandmother’s cold beetroot soup. Explaining it might not do it justice, but bear with me. Essentially, pickled beetroot is blended with buttermilk, cream and eggs to create a smooth, sweet and tangy soup. To serve, it’s garnished with still-warm baby potatoes, sour cream, chopped boiled egg and chives. And that’s it. 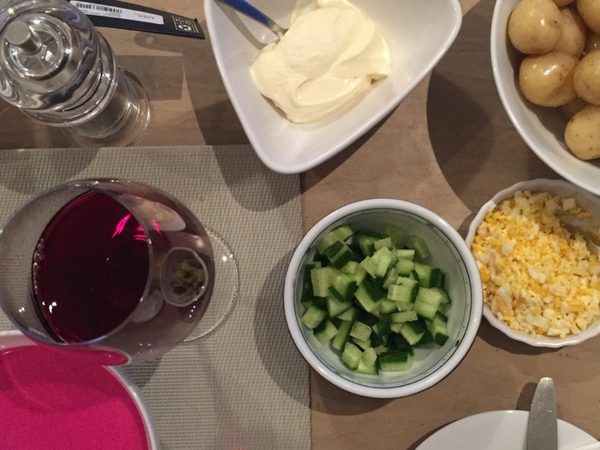 Some of the soup’s accoutrements.

It’s so simple that it’s almost stupid, but it’s actually genius. And this dish has featured at meals where boring old chicken soup just won’t cut it. It looks sophisticated and complex, but it’s not, and the result of these few ingredients is pure magic. The sweet, pickled beetroot hits almost peak acidic tang, but is tempered by the mouth-coating fattiness of the sour cream, egg and boiled potatoes. The potatoes and eggs also work together to add richness and body that is filling yet not overwhelming.

The culture of beetroot soup

You might have assumed, from the title, that the soup in question would be chicken, but this beetroot soup is actually just as traditional. Another name for it is borscht, which is associated with Polish and Russian cuisine. However, it is also very inherent to Lithuanian culture. Why is this important? Well, a large percentage of South African Jews originally hail from Lithuania. (My paternal great-grandparents were Lithuanian, as was my maternal great-great-grandmother.) Basically, Eastern European food has a strong influence in my family’s culture and heritage. In Lithuania, Russia and Poland, the national diet consists of root vegetables, a bit of meat and cultured cheese and dairy. So beetroot soup is not only very Lithuanian (as much as it is Polish or Russian), it’s also very Jewish. 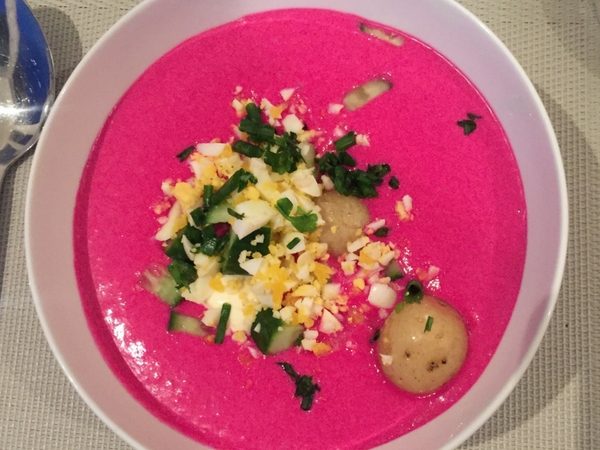 So, where does this recipe come from?

My grandmother says that she can’t precisely tell me where the recipe is from. She thinks it was her mother’s recipe originally, and that it was likely her bubbe’s recipe before that. She is 82, though, so we’ll forgive her shoddy fact checking. Either way, Poem Poem has made this soup time and time again so, in my mind, it’s her recipe.

Since moving out of my parents’ home when I was 18, there are many things I miss – not paying rent and having my laundry done are right up there on the list. But, more than that, I miss the Friday night dinners with family and food. Chicken soup and latkes are always in the forefront of my longing heart, but luckily Kleinsky’s in Sea Point does (nearly) as good a job as my gran in that department.

The beetroot soup, however, is hard to replace or replicate. Only my gran’s will suffice. It tastes like home and childhood, and that’s something that can’t be forced.