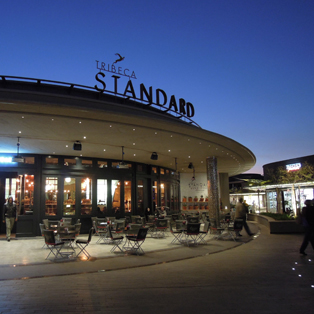 A heady mix of restaurants and food-related stores has popped up at the new Lynnwood Bridge in Pretoria, which has been buzzing since its opening at the beginning of winter.

Usually, new restaurants are given a grace period during which to smooth out the rough edges. Not so at the capital city’s favourite new haunt. Many of the eateries are struggling to catch their breath, but the market will sort this one out very sweetly.

The shopping complex, which is going to be hopping as the weather hots up, has been designed like a typical outside food court, with the new Atterbury Theatre at its heart. Thanks to the neighbouring office blocks and hotel, most of the restaurants are open from breakfast through to dinner every day of the week. Here’s a roundup of everything on offer:

Café Beyritz
The moniker is derived from the name of one of the owners, Etienne Beyers Maritz. He is helped by his wife Emi and a few silent partners, but the passion for food seems mostly his. He describes his café as a European bistro with a French slant. “The food is prepared in classic style with the best ingredients,” he notes. They have comprehensive menus for breakfast, lunch and fine dining at dinnertime, complemented by an extensive wine list.

From eggs Benedict for breakfast to croque monsieur/madame for lunch, concluding with roasted lamb medallions or slow-roasted duck for dinner, the café covers a large spectrum. The interiors are smart and sassy with windows and doors that slide open in summer months.

Stephnies
Also named after the owner, this restaurant has doors leading into the theatre to catch the ‘dinner and a show’ crowd. Stephnie, also an interior decorator, had a contemporary-chic look in mind for the décor. This is shown in details like the umbrellas that match the imported floor tiles, as well as an amazing light centrepiece made by Stephnie herself.

The current menu will soon be pared down a touch – in line with customer responses – but diners can start with melkkos in the morning, opt for bobotie for lunch, and celebrate the night with ostrich fillet with two sauces. Their choice of high teas is extremely popular, and the crisp linen tablecloths, silverware and personalised flowers will make any occasion one to remember.

The Famous Fish Hoek Co.
Theo, the owner of this first branch of an upcoming franchise, says he took advantage of a gap in the market. It’s all about quality and a menu that serves 90% fish, as well as a comprehensive sushi selection. “We have all the basics, very simply and freshly prepared.” This is a seafood lover’s delight, with options like line fish, kingklip, soul and hake, as well as combos like ribs and prawns, or sole, calamari and prawns. The interior is cheery in a melange of black, white and red, and the very basic wine list has enough options to find favour all round.

Tribeca Standard
Tribeca is a strong brand in Pretoria with a coffee bar in the city and another in the popular Brooklyn Design Square. With this new venture they wanted to go the serious food route, adding some old world charm. The interior is dominated by a magnificent Mafikeng pharmacy display stand, which pays tribute to the origin of their name in New York’s fashionable meatpacking district.

Tribeca Standard has both a breakfast and fine food menu, and caters for the sweet tooth with a special dessert selection. Go for a brioche French toast or sweet corn fritters and bacon first thing in the morning, and move on to more serious meals as the day wears on, like their speciality of fresh, live West Coast oysters, steak and frites, rack of lamb, or gourmet burgers.

Vovo Telo
Pretorians who discovered this fantastic bread deli in Joburg must be delighted that owner Iggi van Rooyen has come to the capital. He had always wanted to open a coffee shop, and this one is a perfect fit for both Iggi and Lynnwood Bridge.

He’s been astonished by the city’s response to his artisan breads, as well as the menu of simple food made really well with the best ingredients. Phone ahead if you don’t want to stand in the queue at the counter, but get there early if you want to sit down; they don’t take bookings. These breads have no preservatives and don’t keep long, but they freeze well.

The other franchises in Lynnwood Bridge include Rhapsody’s and a Col’Cacchio. The latter is owned by two local foodies who love everything Italian and have made this restaurant something special. There’s also a Kings Meat Deli, a Woolworths Food and – just across the road – one of the city’s top Spars, as well as a fine Checkers.