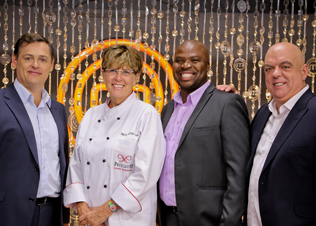 “We have inspiration from… Prue Leith!”

What many don’t realise about the Illustrious and decorated doyenne of cookery in Britain, Prue Leith, is that she comes from South Africa. Prue, who started a chefs’ academy in Pretoria, is a proponent of ‘good’ food, as opposed to unnecessarily complicated plates. She came to grace the Nederburg MasterChef kitchen for the day.

In last Wednesday’s episode, the remaining six contestants were introduced by Masterchef judges Andrew Atkinson, Benny Masekwameng and Pete Goffe-Wood to Joburg’s Chinatown in Cyrildene. There, in two teams, they had to deliver impressive duck meals to real Chinese food judges. The red team of Seline, Kamini and Ozzy narrowly beat the blue team of Jason, Tiron and Leandri. However, Pete lambasted both teams, ashamed of their sub-standard efforts: “As far as I’m concerned, you’re all losers!”

The blue team were to go into the elimination-pressure test and the reds were granted a Masterclass advisory session with previous MasterChef winner Deena Naidoo at his restaurant, Aarya.

On Tuesday, all six sat down with Prue to take tea at a table laden with very South African goodies like melktert, vetkoek and koeksusters.

Prue proposed the challenge for the three in the elimination round to use typically South African ingredients to create elegant, sophisticated food.

“Do something worthy of a Michelin star, maybe two! Posh cooking.”

The allotted time was 90 minutes to create the stellar results using ingredients from a pantry of all the rooibos, game, dried fruits, mielies, pumpkin, biltong and booze that could ever inspire a homesick palate.

Leandri’s selection hinted at something very imaginative, while the boys played their plates safer, both working with venison and rooibos.

Jason created lovely little sweet potato fondants to accompany his springbok loin. Tiron, when it came to plating, struggled comically to spoon-pull a recalcitrant sweetcorn purée across his plates of biltong-crusted venison medallions. Leandri was almost a blur of hyper-activity, working on an ambitious six elements for her production. “My goodness, what a brave girl,” murmured Prue in passing.

“It’s just going to be a case of someone being outplayed.”

It was all marvellously good, but Prue commented on Jason’s thumby plate prints; Tiron’s sauce being too winey and needing more reduction; and Leandri’s grilled-mielie sorbet not being sat directly on a plate that was also her least favourite choice, a fork-screeching slate.

The three in their black aprons hung heads as the elimination verdict was delivered. Tiron, who was so promising, had to go back home to Johannesburg. As Pete had predicted, the decision was made on a mere technicality, simply because Tiron’s sauce needed some further reduction.

Leandri’s brandy and apricot ostrich fillet, with the said sorbet and butternut puffs, was clearly the sublime winner. “That is one adorable girl,” confided Prue to Pete.

In the next episode, the remaining five contestants will find something very strange about their mystery boxes…