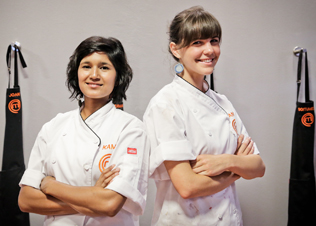 What a privilege to be writing up the last episode of MasterChef SA Season 2! We’ve had more than our fair share of kitchen dramas: skillful cooking and preparation from the contestants in the picturesque Nederburg HQ setting and other incredible locations; the judges delivering some masterful performances; pressure tests and challenges that had armchair critics on the edge of their seats; and South Africa’s best chefs showcasing world-class dishes for preparation. It was indeed the dream of thousands and, for the 16 who made into the MasterChef kitchen, a dream come true!

Tuesday night’s episode bade farewell to Seline who, together with her sister Leandri who fast-tracked to the finals with her cooking prowess, thrilled MasterChef SA fans and put Mahikeng on the map. The grand finale last night pitted the blogger from Cape Town against the scientist from Mahikeng. Kamini and Leandri were going head to head one last time and there was everything to cook for.

Leandri and Kamini arrived together at the MasterChef kitchen on a drizzly, wet day but the damp weather didn’t affect their mood. The girls were feeling energetic, high, motivated and excited. Leandri acknowledged that Kamini was the “person to beat” and pushed her to cook her best. The 14 ousted contestants were waiting to welcome them and it was a great reunion of the top 16. Judge Pete Goffe-Wood welcomed the pair, reminding them that it was the biggest moment of their lives and one of them would be crowned South Africa’s next MasterChef. Close family members were invited to cheer on the two finalists and it was heartwarming to see how much this meant to Leandri and Kamini.

The finale consisted of three rounds – a mystery box, an invention test and a pressure test. The judges would score each round and at the end the contestant with the highest score would be crowned MasterChef SA. Kamini was fired up and ready to go and Leandri was “excited beyond belief”.

For the mystery box challenge, Pete Goffe-Wood chose 11 of his favourite ingredients, which included Cape rock lobster, coriander, fennel bulb, capers, potatoes, watercress and chardonnay. With 45 minutes to prepare, it was game on. The contestants worked at lightning pace to get everything ready and gave it their all, with a few close shaves thrown in for good measure.

In first for the all-important taste test was Leandri with her seared lobster medallions served with lobster custard and herb soup. The judges seemed impressed with the presentation, however a mishap with the soup let her down. Kamini brought in her tagliatelle with a tomato-based fennel sauce with crème fraîche and lobster. While presentation wasn’t her strong point, the judges were wowed with the taste, with Pete Goffe-Wood asking for more.

Up next was the invention test. With five minutes in the pantry and only chicken to work with, creative sparks were flying. Kamini used some of her previous experience on the series and Leandri pushed the limits on a chicken liver brûlée within the allotted 75 minutes set for the challenge.

Chutney, chicken skins, terrine and polenta chips were involved and it was down to the wire with just seconds remaining. This time, Kamini went in first for the taste test. The judges liked the presentation and the clever use of the chicken and Andrew Atkinson thought the custard was a bit rubbery. Leandri presented next with her chicken liver brûlée served with crispy polenta chips and fruit chutney. The judges tucked in and were relishing the contrasting tastes between crispy and smooth but found the chutney too acidic and overpowering.

Finally, the pressure test was revealed under a silver dome. It consisted of a pomegranate éclair with peanut butter ice cream, pomegranate jellies and pliable chocolate – and 90 minutes to create the dish.

Judge Benny Masekwemeng reminded Leandri and Kamini that it was their “final countdown for glory”. This was a test of precision and measurement and both contestants would be judged on the same dish. With three minutes to go both contestants had barely started plating and were dealing with watery jellies and melting ice-cream. Kamini presented first and confessed she didn’t feel confident with her efforts. The judges were happy with most of the components except the jelly. Leandri felt she did a good job however the judges found her jelly was too sharp and the pliable chocolate too grainy.

The red carpet was rolled out for Kamini and Leandri as they made their way through the kitchen flanked by the other 14 contestants. Pete praised the contestants and the journey they had come through, culminating in the finale. The scores revealed 83 points against 89 and the tension was palpable.

But it was the season’s front-runner, Kamini Pather, who deservedly won the prestigious title of MasterChef SA. Leandri was a worthy opponent and put up a formidable effort. With this cracking second season and a sizzling grand finale, Masterchef has inspired kitchen-istas across South Africa!

Having trouble letting go? Read up on every episode this season on the dedicated MasterChef page.