MasterChef SA 2: behind the scenes at the auditions 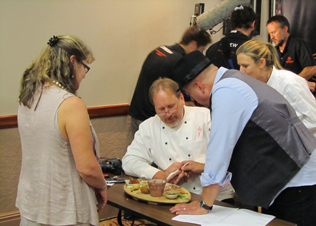 On a day made for relaxing at the beach with a cocktail in hand, a line of hopeful contestants instead queued outside Cape Town’s Cullinan hotel with cooler boxes of all sizes, assessing each other nervously. MasterChef SA held auditions for its second season in the Mother City, Durban and Johannesburg and, if last week’s Cape Town auditions are anything to go by, this time viewers can expect even more passion, drama and culinary expertise.

“This show broke new ground for food and TV in South Africa,” returning judge Pete Goffe-Wood says of series one, which had the fifth highest viewership on M-Net. “It’s a fact that South Africans make for good TV.” The British MasterChef took the world by storm in 1990, but it was the Australian version, upon which our edition is based, that really made it a success. The contest became a reality show, and entrants are now expected to have gastronomic know-how as well as a personality with which viewers can identify.