Meet the Prudential Eat Out Chef of the Year 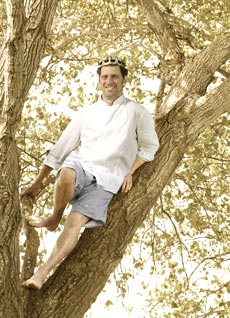 Since joining La Colombe in November 2006, British-born Dale-Roberts has stamped his culinary signature on this revered Capetonian dining destination.

This gastronomic destination attracts epicureans from all over the world with its sublime sauces and reductions and cutting-edge combinations of taste and texture, comments Graham Howe in the 2009 gold edition of Eat Out Magazine.

Writes Eat Out assitant editor, Lisa van Aswegen, The restaurant and menu are constantly evolving, and theres always new things happening in the kitchen. His excitement at getting hold of elderflowers in spring, for instance, was palpable.

Whether it’s a far-flung country, the changing of the seasons or the fresh smells of earth that inspire him, Luke Dale-Roberts is set to continue setting culinary benchmarks in his role as king at La Colombe, she concludes.

> Read an interview with Luke Dale-Roberts
> Read the full review for La Colombe.
> See all the Prudential Eat Out Top 10 restaurants.