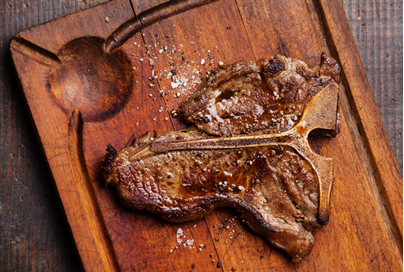 Southern suburbs folk will be pleased to have another top-notch restaurant in their hood, as SA’s best steakhouse, Carne SA, opens another branch in Constantia.

His second, smaller Carne on Kloof Street has been open for less than a month, and chef-proprietor Giorgio Nava says it’s busy every day. Now he’s hoping to transfer the successful franchise to Cape Town’s southern suburbs.

“I chose Constantia,” explains Nava, “because there is a lot of potential; I believe customers are looking for something like this in the area.”

Due to open in mid-September at 114 Main Road, The new restaurant will be taking both its menu – “meat and Italian” – and décor – “wood, steel, grey walls, red elements” – inspiration from the original Carne SA (Keerom Street), winner of the 2013 Eat Out Jacobsdal Best Steakhouse Award.

Highlights from this menu, recommended by Eat Out panellists, include: the 1.2kg T-bone; ravioli filled with slow-baked lamb shoulder, sage butter and parmesan; sweetbreads with artichoke mash; prime rib on the bone; hanger steak; La Fiorentina (for two to share); the bresaola with lemon juice and olive oil; and Karoo lamb with sautéed spinach. The restaurant’s beef and lamb are reared on Nava’s very own farm in Nieu Bethesda. Look out for details and booking information on www.carne-sa.com and stay tuned to Eat Out for reviews after the restaurant opening.