The number 4 restaurant in the country: Greenhouse

At the historic Cellars-Hohenort Hotel, surrounded by vast manicured gardens, Greenhouse turns out mind-blowing, detailed plates of food. Greenhouse was also the recipient of the 2015 Boschendal Style Award.

Watch chefs Peter Tempelhoff and Ashley Moss hear the news on the day.

This is a menu full of drama and detail. There are gels and foams and multiple ingredients on each plate; chef Peter Tempelhoff knows what he’s doing, and each artfully dabbed dot of colour is packed with flavour.

The meal kicks off with a whirlwind of flavours: a tiny cube of mushroom cheesecake gives a heady kick of umami, closely followed by a burst of sweetness from the intense sherry jelly on top of it. Then there’s a crumbed ball of richly meaty oryx on a rough-hewn twig, and a powerful hit of green olives, tempered slightly by passion fruit, all hidden beneath innocent-looking white mozzarella on a miniature spoon. And these are just the appetisers. 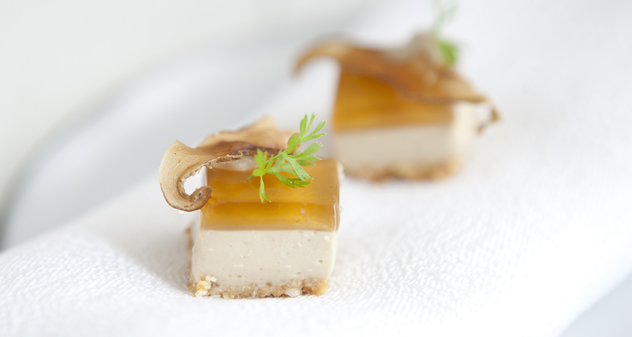 An exotic dish by head chef Peter Templehof at Greenhouse. Photo courtesy of the restaurant.

Release the Kraken, a dish of octopus and game fish, is plated on a dramatic black smear of ginger-infused squid ink. Frozen yuzu dressing, spooned onto the plate from a tiny pot smoking with dry ice, heaps on yet more drama. It’s the literary-sounding The Duck, the Ostrich and the Big Num-Num which packs the bigger punch in terms of flavour, though. Umami-rich fermented mushrooms perform a sweet-savoury balancing act with sweet fruity raspberry beer and tender duck. 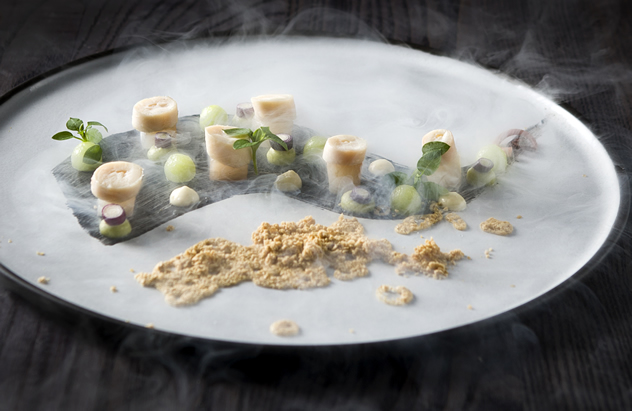 A dish of octopus and game fish, is plated on a dramatic black smear of ginger-infused squid ink at Greenhouse. Photo courtesy of the restaurant.

Drama appears again in a ball of dough, which arrives on a block of heated Himalayan sea salt to rise at the table. It grows and mists up its glass cloche before being whisked away and returned, baked, with a masterful cheese course. Composed of Dalewood’s Huguenot cheese treated four ways, the Four Degrees of Cheese is simple but stupendous. First there’s a glorious warm chunk of cheese soufflé in silken cheesy sauce, then a shaving of the six-month matured version of the cheese – all concertinaed like some fancy forest fungi – then a cheese panna cotta, and last of all, an improbably creamy quenelle of Huguenot cheese ice cream, atop a Huguenot crisp. It’s an absolute highlight; a local riff on Italian wizard Massimo Bottura’s five ages and textures of Parmesan. 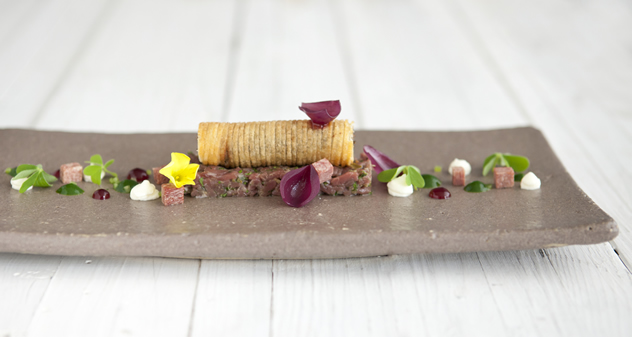 Another fantastic creation by head chef Peter Templehof at Greenhouse. Photo courtesy of the restaurant.

The palate cleanser is another inspired sweet-salty offering – a custard flavoured with Lay’s chips. Paired with a beer ice cream and crumbs of broken pretzel, it’s something quite magnificent.

In other places, the dishes are more complex: there are seven or eight flavours hiding in each, and finding and identifying them is an intellectual exercise. In a couple of cases, the complexity has one’s mind tripping up, in others, the multitude of flavours work together like an orchestra. An incredibly concentrated dab of lime gel lifts the sweet banana brûlée to another level; a powerful undercurrent of concealed olive transports one back to a first experience of the fruit; and a magnificent kick of sherry sweetens and balances the powerfully savoury mushroom cheesecake.

All in all, it’s an ambitious but rewarding journey.

The well-balanced list shows off meticulously selected bottles arranged by varietal and region, so you’re free to try a Swartland white blend or an Elgin chardonnay. There’s a good representation of natural, organic and biodynamic wines. Wine pairings are nuanced and, in places, inspired. A tawny port by De Krans is beautiful with the cheese course, and a Liefmans fruit beer turns out to be just the ticket for the duck. 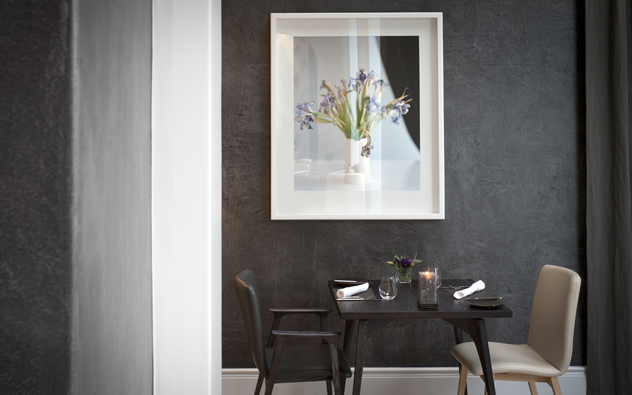 The elegant interior at the Greenhouse at The Cellars-Hohenort Hotel. Photo courtesy of the restaurant.

Staff members are eloquent and accommodating, but for the most part their manner is easy – not stiff and stuffy as you might expect from a hotel restaurant.

The grounds of the historic Cellars Hohenort Hotel make for a magnificent location for this greenhouse of sorts. Recent renovations have resulted in a moody, contemporary space inside the restaurant. Charcoal walls, custom-made bare timber tables and stylish leather chairs in brown and cream make the perfect canvas for such nuanced, dramatic food.

Finish with a single-origin coffee tasting, with Ethiopian and Rwandan coffees.

The Eat Out Mercedes-Benz Restaurant Awards are judged by a panel of judges. Eat Out critics and judges dine unannounced and pay their own way. View the judging criteria here.

The stylish interior at Greenhouse at The Cellars-Hohenort Hotel. Photo courtesy of the restaurant.