Online ed’s diary: 5 of the most delicious desserts I’ve eaten this month

I eat a lot of dessert.

I spent about three hours with owner Yann Rey in his first week of opening, tasting all the flavours and learning all about how he makes his ice cream so magnificently creamy, yet light. It’s all very scientific. I subsequently went home and raved about it so extensively that my partner demanded we return that very weekend. Ever so slightly concerned that I might have oversold it, I took him along, but thankfully Dylan was blown away. He selected vanilla and was thoroughly happy with his decision, the state of the world, and the future of the human race. I had the slightly salted chocolate one, and felt similarly smug. So much chocolatey depth, such richness, such lightness! As yet, there is no crushing queue of hipsters darkening the door. Go!

IYO has opened a new section with more atmospheric lighting, better acoustics, and more seating options. It’s also got TV screens for sport, though those tend to leave me cold – except when they’re displaying Olympic gymnastics and a waiter is earnestly attempting to copy a gymnast performing with a hula hoop. Hearing that the salted caramel cheesecake was no more, our waiter brought us the Oreo cheesecake instead. It was glorious. Sweet, yes, in the way that sort of forces you to share a slice, but fudgy and malty and creamy and gone in sixty seconds.

3.The salted-caramel Oreo cheesecake at Burger and Lobster (Bree Street)

Having wolfed down a lobster roll, I did not honestly have space for a slice of cheesecake. But in the name of duty, I ordered one, and transported it carefully back to the office, where I was given a hero’s welcome. The cheesecake, it turned out, is insanely delicious – particularly the caramelly layer on top. Make sure to slice vertically if sharing!

4.The chocolate pot at Hook, Line and Sinker (Pringle Bay)

Bookings at this scruffy little restaurant are already filling up for December, largely because of the incredible seafood. (My favourite is the simple buttery and garlicky treatment.) But Jacqui’s magnificent chocolate pot deserves a star on the boulevard, too. It’s a cream, rather than a mousse, and it’s brûléed tableside. The recipe is a trade secret, but it tastes to me like Bar-One sauce or perhaps condensed milk with milk chocolate. It’ll capture the kid in you.

I’ve never seen sunflower seeds done like this. Crunchy and light, they mingle with the sweet honeycomb like the world’s most delicious trail mix. They pair beautifully with the little cake-let, which has been doused in brown butter. Tiny chamomile flowers, meanwhile, add an extra layer of flavour. Yum. 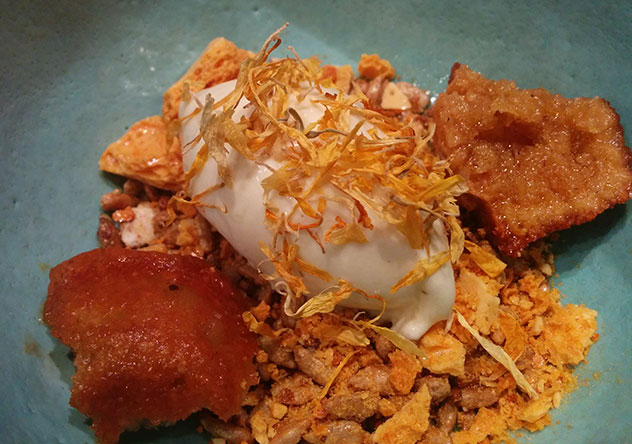 The Test Kitchen is sadly closed right now for some renovations, so you’ll have to use your imagination for this one. Photo by Katharine Jacobs