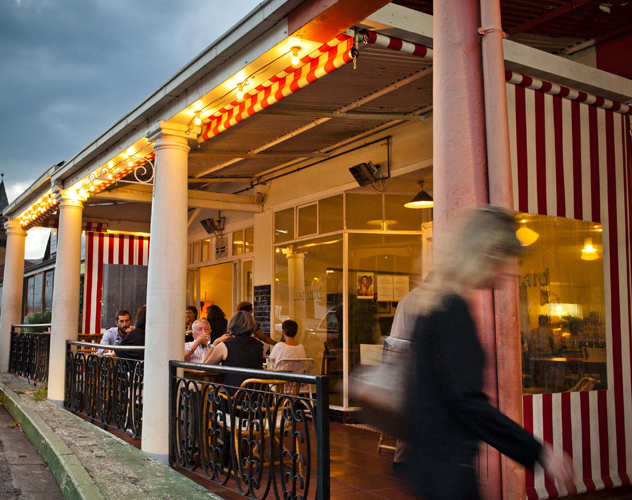 It may be labelled quirky and playful, but the food at The Leopard (the winner of Eat Out’s Best Bistro Award for 2013) is seriously good, backed up by professionalism and excellent cooking credentials, says Gwynne Conlyn.

If Andrea Burgener is thought of as whimsical, that might just be the special ingredient that creates magic at The Leopard. The late legendary artist, cook and writer Braam Kruger gave Andrea her nickname of ‘the fairy’ when she worked for him at his wildly different Kitchenboy restaurant. They were both creative individuals, both playful and thoughtful. As Braam used to say, ‘Stay true to yourself’. Andrea, being true to herself, recently moved with her husband and partner Nicholas Gordon back to her ’hood in Melville to serve the kind of people she relates to – and they love it. 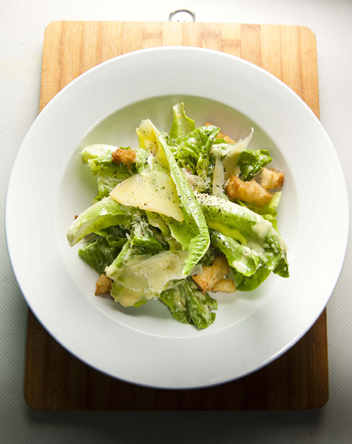 This is sophisticated simplicity. If you blend thoughtfulness and playfulness you’ll get, for instance, their take on the classic Caesar salad. As Andrea well knows, the dish is not Roman, nor was it named after Julius Caesar. (In fact, it was Italian Chef Caesar Cardini who created it in 1924.) This lip-smacking dish has a ‘Caesar-esque’ dressing, as well as ‘chilli-anchovies’. It’s superlative.

Another highlight are heavenly tapas-style white anchovies on toast with Spanish onion, a spark of lemon rind and parsley; and the shiitake mushroom broth with sake and green onions has a lovely flavour, especially with an extra dash of soy sauce.

Despite being rather odd sounding, the spaghetti with marmite is a favourite with the regulars. (Butter and marmite are melted together, tossed with a little pasta water and added to the spaghetti, with good parmesan on top.) It’s the kind of dish that makes you feel as if you’re sitting at your Italian mama’s kitchen table.

If you’re lucky, you’ll find Andrea’s meatballs with butterbean mash on the menu. Using offcuts from the Greenfields grass-fed rump chopped for the steak tartare, the meaty dish and its sauce will entice you to dive in. Ingredients and flavours from Africa and the East feature often. The steak tartare, for instance, is served either quasi-French classic style or quasi-Ethiopian, with ginger, cumin, lemon and chilli.

The Leopard uses the best ingredients available, which is why the menu changes so often. Furthermore, they only grass-fed beef, free-range poultry and pork and seafood from sustainable sources. Aside from the whimsy, this is real, outstanding restaurant food.

There’s a small but perfectly formed wine list, intelligently chosen to complement the multi-layered flavours of the food, and a number of good teas and coffees, including proper iced coffee.

The Leopard’s very professional-looking website says their food ‘ambles out the kitchen’. But if the serving folk look too relaxed, don’t be fooled – they’re utterly devoted to the owners’ tiny kitchen and the wondrous, freshly cooked dishes it produces. All in all, everything about The Leopard is professional, laid-back and very warm and welcoming. It’s best to book ahead, as the seats fill up quickly on any given noon or night. 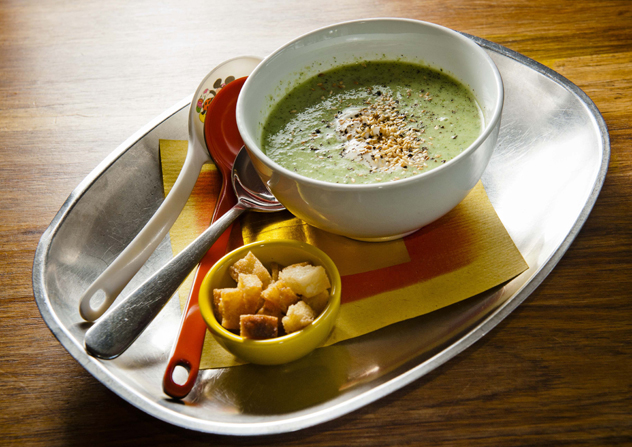 Andrea has created a sense of nostalgia here on so many levels. A selection of disparate overhead lights hangs from the pressed steel ceilings, quirky found objects and pictures appear on the walls, you’ll get happy paper napkins and sit on loved, mismatched furniture. You might spot local artists and international tourists in the know, but not too many air-kissing socialites. Having a meal at The Leopard feels like being part of a family party.

If Andrea’s cooking appeals and you’d like to learn, her first cookbook, Lampedusa Pie (published by Bookstorm) is available at The Leopard and selected bookstores.

Have you been to The Leopard? Let us know what you thought by writing a review.