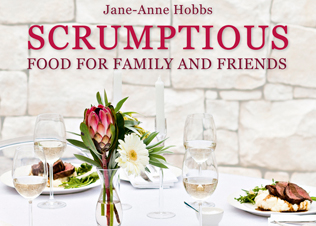 Local journalist, editor, blogger, mother and cook Jane-Anne Hobbs has a brand-new book. Scrumptious Food for Family and Friends offers over 90 heart-warming, triple-tested recipes. We chatted to Jane-Anne and find out where she gets her ideas, what her biggest kitchen disaster was, and how to write one’s own recipe book.

Who or what inspires you?
I am continuously inspired by old cookbooks, whether these are centuries-old manuscripts, wonderful vintage recipe books from the 1930s and ‘40s, or my large collection of junk-shop finds from the 1960s and ‘70s. I have a particular interest in heritage recipes, those tried-and-tested favourites that have been passed down in the family.

I regularly reread books by my favourite women cookery writers of the 19th and 20th centuries – Eliza Acton, Elizabeth David, Jane Grigson, MFK Fisher – and learn something new every time. When I am cooking for my family, as I do every night, or developing new recipes, I take inspiration from beautiful fresh ingredients from my local supermarkets.

What is your favourite thing to do with potatoes?
?I would eat hot, fluffy, mashed potatoes with cold nuggets of butter for lunch and dinner every day if I had the choice (and waistline!), but I have a hungry family to feed, and no time to peel spuds. I make crisp potato wedges and baked jacket potatoes about three times a week for my family, and there are always roast potatoes on Sundays. My favourite potato dish for a special occasion is a creamy pommes Dauphinoise, made by simmering the sliced potatoes in milk and cream, with a bay leaf and a whisper of nutmeg, before they go into the oven. Here’s my recipe.

?My oven-baked pork, sage, cider and potato stew. This is a rather rich recipe, because it has some cream in it, but it’s very easy to make and is so delicately flavoured – always a winner.

And cauliflower?
?I love old-fashioned cauliflower cheese and make it often for my family, sometimes adding steamed broccoli, cubes of good smoked ham and a crisp topping of grated Parmesan and breadcrumbs. Cauliflower is also delicious when it’s young and served in crisp, wafer-thin slices with a hot and salty dressing. I developed this recipe for cauliflower salad with crisp-fried chorizo sausage and a warm lemon dressing for my cookbook, and it’s become a great favourite in our house.

What’s the biggest kitchen disaster you’ve ever had?
I have had many spectacular kitchen failures in my time, and thinking about them makes my cheeks burn. On one occasion, I thought that ground-up freshly popped popcorn would make an interesting crust for chicken breasts. The kitchen looked like a blizzard had hit it, and I picked bits of popcorn from my hair for weeks after that. Another time, I made a buttermilk cheesecake for a lunch party, and I failed to notice that the plastic film on the top of the cream cheese carton had fallen into the mixture while I was blending it. My guests politely picked the plastic bits out of their mouths without saying a word.  It was only when I ate a slice myself later that I realised I’d fed them plastic.

What is your failsafe weeknight dinner dish?
?Grilled steak or chicken breasts with a rocket and Parmesan salad. Everyone in my family loves rocket, and we eat it almost every day.

Which are your favourite local restaurants to eat with family and friends??
We don’t eat out often at fine-dining restaurants, because there are five hungry people in our family and the bill seldom comes in under R1000. For less than half that amount I can make a fabulous three-course meal at home with top-quality ingredients. (Like fillet steak, for example!) In summer, we enjoy good pizzas, seafood and burgers at the Lookout Deck in Hout Bay Harbour (especially on Sundays, when there is live music and a lovely vibe), or draft beer and filling pub grub at Dunes. For birthdays and other special occasions, we head over Constantia Nek to our favourite restaurant, Societi Brasserie in Tokai, for delicious, unpretentious, brilliant cooking. I also eat out in Franschhoek when I visit my mother there, and my favourites are The Common Room at Le Quartier Français – the tempura beans are faintingly good – and Cafe des Arts for outstanding slow-roasted duck.

What ingredient do you absolutely despise? ?
Any sort of offal. Just thinking about kidneys or liver makes me feel ill.

You’ve got friends coming over in an hour. What would you make as a quick supper?
?Toss a kilogramme of ripe, sweet cherry tomatoes into a blazing hot wok with some olive oil. When the tomatoes are blistered and beginning to catch, stir in three minced garlic cloves, salt, pepper, a pinch of sugar, a sprig of fresh rosemary, four tablespoons of butter and a glass of white wine. Turn down the heat and let the tomatoes reduce for 25 minutes, stirring now and then, and lightly crushing them to release the juices. In the meantime, cut up a packet of good bacon and fry until crisp and golden. Drain away the fat, deglaze the pan with a glass of white wine, bubble for a few minutes, then stir the wine and bacon bits into the tomato sauce. Simmer for another ten minutes, then gradually stir in a cup of cream. If you’re worried that the acid in the tomatoes will curdle the cream, add a pinch of bicarb to tomatoes at the beginning. Serve with spaghetti, shredded fresh basil and plenty of grated Parmesan.

…And if you had all the time in the world? ?
I would make youvetsi, a slow-cooked taverna dish of lamb, pasta rice, tomatoes and Greek kefalotyri cheese. The recipe for youvetsi in my cookbook was given to me by my Greek friend Michael Karamanof, and it never fails to delight and satisfy my guests.

This is your third book. What advice would you give aspiring recipe book authors?
?Try to write a good, enduring cookbook, one that people will actually use, rather than simply gaze at. Create original recipes, using your own cultural and family recipes for inspiration. Choose dishes that you like, that strike a chord in your heart, and avoid showy or faddish recipes. Test every recipe thoroughly, and express it clearly using succinct instructions and accurate measurements.

Try one of Jane-Anne’s recipes for yourself: Double-craggy garlic and herb bread with peppered cheese