It’s been an Atlantic Seaboard icon since it first opened in the early seventies, but after a R120-million renovation, The Ritz Hotel in Sea Point is set to reopen on 15 December. Most famous of all, the revolving restaurant on the 23rd floor will turn once more in its new incarnation as Top of The Ritz, the hotel’s flagship restaurant. 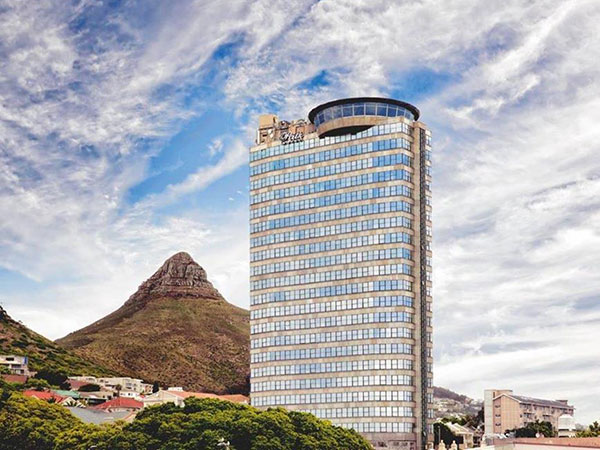 On the 22nd floor there will be a Dom Pérignon Champagne Lounge, one of only a handful around the world. Offering bubbly, cocktails and local DJs, this will be the spot for sundowners. The Hennessy Cognac Cigar Lounge on the 21st floor, meanwhile, is designed to catch the after-dinner crowd.

By day, CASA Restaurant & Cabanas will offer dishes ranging from brasserie classics to sushi and wood-fired pizza, with tables flowing out from the interior to the pool deck and exclusive poolside cabanas. There will also be a Veuve Clicquot Bar, serving French Champagne and Whispering Angel rosé.

The hotel had originally announced that Bertus Basson would run the flagship restaurant, but the Overture chef will no longer be involved in the project. The hotel’s original opening date last summer was also delayed. In the meantime, the 23-storey building has undergone extensive renovations. From the sounds of things, the new look will be very glam indeed. Think Martinique wallpaper – the banana-print pattern made famous by The Beverly Hills hotel in Los Angeles – as well as smoky mirrors and deep-buttoned velvet bucket chairs.

As for the food, we’ll have to wait for more detail. But from the vantage point of our offices, those pool cabanas and cocktails sound very good indeed.