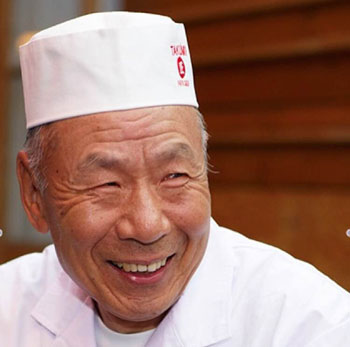 The creator of Cape Town restaurants Tokyo, Minato and Takumi, sushi legend Hatsushiro Muraoka, fondly known as Papa San, is reinventing himself once again. He’s joined forces with chef-partner Ben Bettendorf to open Obi on Long Street. Pronounced “oh-bee” and meaning the sash that ties a kimono, the new eatery will feature sushi, tempura and ramen and follow a similar style to the erstwhile Takumi.

Obi will seat between 60-70 patrons and is set to open in July at 14 Long Street (previously News Bar, next to Ou Meul Bakkery). “Sushi will be the focal point,” explains Ben, who worked with Papa San at Takumi for two years, “supplemented by other Japanese dishes that we’ve wanted to explore, plus a blackboard with specials.”

Papa San’s indomitable reputation and visible presence in his previous establishments were likely factors in the restaurants’ success, and he and Ben plan to be as hands-on for Obi. Quality ingredients and customer experience will be priorities. He and Ben see Obi as an opportunity to educate – or reeducate, in some cases – the public on the distinct values and clean flavours of Japanese cuisine. “In ’91 when I opened Tokyo, there were two Japanese restaurants,” Papa San says. “Now there are hundreds and you can get takeaway sushi in the supermarket. But the sushi is cold, the rice hasn’t been cooked properly, and the fish isn’t the best quality.”

Dishes at Obi will be fresh with sushi made to order. Ben is no stranger to the hospitality and culinary scene, having worked at his late father’s eponymous restaurant, Arnold’s. After completing his chef’s course, he apprenticed at The Tasting Room at Le Quartier Français, before applying for an opening at Takumi to try his hand at Asian cooking between jobs. He ended up “falling in love”.

“Papa San and I really clicked. We have the same interests and have wanted to do something together,” he says. Ben refers to the two weeks he spent in Japan hosted by Papa San, where they soaked up ideas and inspiration, as an “eye-opening food sabbatical”. Since Takumi, he’s worked at Jordan Restaurant, been involved in the inception of Downtown Ramen, and is currently at Jardine until the end of the month when he’ll reignite his Asian love affair at Obi.