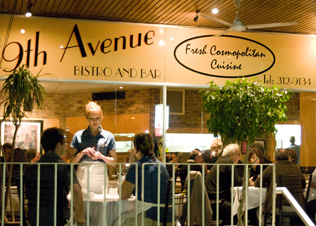 “Tonight’s appetiser special: Slow-roasted suckling pig with ricotta gnocchi, artichoke aioli, fresh artichoke and orange,” tweets 9th Avenue Bistro one day in mid-December. The restaurant won the award for Best Bistro at the 2012 Eat Out DStv Food Network Restaurant Awards, and I’m paying close attention to their Twitter feed in anticipation of an upcoming meal there. A few days later, they’re squashing Saldhana bay mussels in homemade pineapple beer with basil, charred pepper, ginger and coconut milk into 140 characters. It’s enough to get me drooling onto my keyboard in anticipation.

Graham and Gina Neilson are the husband-and-wife team behind these insanely delicious creations. They met at the very restaurant they would one day own, back in 2005. “I was the waitress; he was the chef,” Gina explains. They traveled widely – working in restaurants in England, Austria, the USA and Bermuda – before returning to KZN. The two were working at Fordoun Hotel and Spa in the Midlands when they received a call from 9th Avenue’s previous owner, Carly Goncalves, some three years ago. “He said, I know you guys have no money, but I’m either going to close the restaurant, or you guys are going to buy it and pay me off month by month.”

Graham and Gina inherited a thriving business with a dedicated following, and there are some dishes that Graham is still struggling to take off the menu, ten years after they were first enjoyed by fans. “Durbanites like really simple food that’s really delicious,” says Gina. Graham admits many of their diners come in and don’t even open the menu before ordering one of the classics, like crispy roast duck, homemade roasted butternut squash ravioli, or the crispy fried calamari.

But for those with a taste for more contemporary options there’s also a feature menu, which Graham changes every three months; a six-course tasting menu; and daily specials – like those exotic-sounding mussels. “A friend who lives in Zululand ferments it for me,” Graham explains when I enquire about the pineapple beer. “It’s not as sweet as you’d expect; it’s quite sour.”

The proof, of course, is in the pudding. And after all this anticipation, I’m a little worried that I’m going to be disappointed, like when somebody raves too much about a film and it fails to change my life as much as I want it to.

I needn’t have worried. This is simple, delicious food, and I couldn’t be more satisfied. Even the piping hot rosemary and olive ciabatta we receive with our drinks has me gushing. “We bake every day; sometimes twice a day,” Graham explains. “It’s got a lot of olive oil in it, that’s why it’s so good.”

Our meals are equally tasty, and offer great value for money. A caramelised onion and goat’s cheese tartlet works beautifully: the sweetness of the onion contrasts with the salty olive tapenade, and crunchy chopped walnuts add texture. The Cajun pork belly is succulent and juicy, and the creamy shellfish orzo with loads of sautéed scallops is bowl-lickingly good. Another highlight is the trio of chocolate mousses – a really great rendition of the classic dessert – and probably one of the chocolatiest chocolate mousses I’ve ever tasted.

The menu is due for an update in the next couple of weeks, and Graham is working hard on some lip-smacking new dishes. There’s a lamb shoulder dish on the cards, rillettes made with quail meat, and olive oil-poached tiger-striped tomatoes.

In keeping with the current trend, Graham is also experimenting with smoking. “They crop the vines at Abingdon Wine Estate and we use the vines,” he reveals. Currently they’re being used to smoke potatoes to serve with a pork dish with apple, basil and chorizo.

“I’ve been saving beef fat to do roasted potatoes for the fillet, and I’m braising short ribs for the liquid to make white and green beans for the dish too.” (Queue more drooling from my side…)

As for the desserts, Graham is working with his pastry chef to make a peppermint forest with caramel mousse and apple sorbet. “We’re making crystallised herbs and chocolate biscuits,” explains Graham, “but we’ve got to see what’s practical. Sometimes the best intentions let you down. You have to be able to make a dish look good during a busy service, and you’ve always got to bear that in mind.”

Judging by the service inside the restaurant, the couple have certainly got this balance waxed. There’s a palpable warmth inside the small, simple space. Tables are full, food comes out of the kitchen effortlessly, and there’s that unmistakable feeling that you get sometimes, knowing that someone is in control, and that you’re being looked after. It’s this feeling, coupled with hard-to-beat comfort food, that keeps some of Graham and Gina’s customers coming back three times a week.