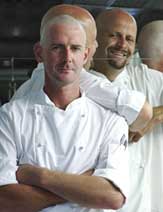 theshowroom has taken off since opening last year, fast becoming a popular choice for its ‘wow’ food style and chic venue.

Rumour has it that Bruce has more restaurant ideas up his sleeve (creating the space for an extra chef at theshowroom), but we’ll just have to wait to hear more about that!

Locally, Phil used to head up the kitchen at the Cellars-Hohenort Hotel’s Greenhouse restaurant. His UK experience was exacting, having working under two infamous 3-star Michelin chefs: Marco Pierre White, at Quo Vadis and Raymond Blanc at Petit Blanc Brasserie. Bring it on!

Says Bruce, ‘Phil has the same philosophy when it comes to uncompromising standards. He has been grounded in the classics, whereas, I push ‘out-the box’.

‘Phil is a sought-after chef in his own right, and we look forward to the solid base he will add, and positive impact that he will have on theshowroom.’