Lekker Vegan owner James Knaap, who’s been making waves at the Barrack Street branch with vegan fast food-inspired treats, will be opening the new branch in the next few weeks following the high demand for plant-based easy eats. The team has also applied for a liquor license for this venue, to keep up with the party culture of the Kloof Street stretch. 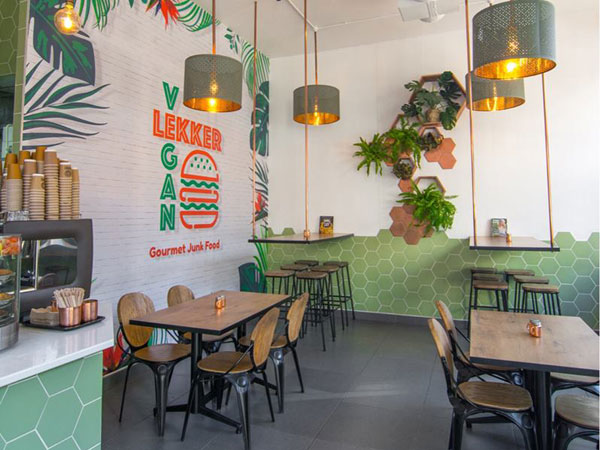 The interior at Lekker Vegan on Barrack Street. Photo supplied.

The food menu, however, will remain the same as at the Barrack Street branch to create a new fast food wave. “We are working towards a franchise model to make vegan comfort food easily available cross-country,” says James. This means that diners can look forward to dishes like OTT burgers made with vegan chicken or beef patties; gourmet gatsbys filled with vegan protein, vegan cheese and all the trimmings; and late-night snacks like crispy potato chips and sauce, chip rolls, vegan cheese sticks and plant-basted nuggets.

The new eatery will be located in between Mixa’s Schwarma and Prashad Café at the Palmhof Centre, where a deck for outdoor seating is being built.