Why we love to pig out on pork 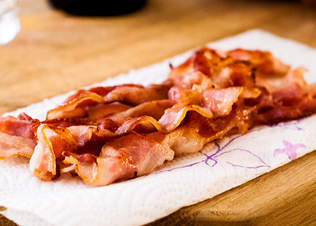 It’s the duct tape of the kitchen. Working equally well with sweet, sour and salty, this ‘white meat’ can be cured, battered and fried, roasted, stewed and baked into a pie. Fried rashers offer unsurpassed simple pleasure on a roll; crispy pork bits can jazz up a quiche, burger and pizza; and pork belly has made its way onto the menus of the Top 10 restaurants in the country. Linda Scarborough delves a little deeper into why we love to pig out on pork.

Bacon mania has surely peaked in the last few years. By now most foodies will have heard of bacon maple ice cream, chocolate covered bacon and bacon croissants from Jason, but some fanatics are taking bacon worship to new heights. “Everything should taste like bacon,” says US-based JD Foods. Everything, you ask? Salt, mayonnaise, soda pop, lip balm and yes, even stationery.

I can understand the appeal of authentic rashers with their trimmings of crisp fat, but bacon products with fake smoked flavour usually leave a lot to be desired. (And an up-chuck bucket, in most cases.) Winner of Best New Product at the 2013 Eat Out Produce Awards, Cure Deli’s Bacon Jam is the exception. It’s actually made of bacon, for starters. Working on the premise that everybody has a love for bacon but not enough time to eat it every day, Martin Raubenheimer came up with the idea of a sweet, smoky bacon ‘jam’ that you could keep in a jar. Spread on hot toast, the fats from the pork melt and leave you with a sweet-salty umami kick.

But why is pork so delicious?

Cured meat is high in umami, the fifth (and relatively newly discovered) flavour component. Umami has the distinction of being detected by all taste buds, irrespective of their location, unlike those for sweet, salty, bitter and sour.

Neil Jewell, winner of the 2013 Eat Out DStv Food Network Produce Award in the Paddock (cured) category for his charcuterie, says people love pork because it’s so versatile. (Neil is also the chef at Bread & Wine restaurant at Môreson Wine Farm.)

“Pork reaches across Asian, Italian, French, German, English and American cuisines. It’s got a perfect PH, which is why it’s ideal for curing and drying,” explains Neil.

“I’m incredibly fortunate to buy pigs from Charlie Crowther (from Glen Oakes Pig Farm), a pure pasture pig farmer with 600 hectares of land and 400 pigs. He’s the hero as far as I’m concerned.”

Enaleni Farm
in KZN, winner of the Eat Out Produce Award in the Heritage category, is another such hero. Sadly, there are fewer than a handful of South African farms producing free-range pork; yet there are over 60 000 sows that farrow in metal cages in South Africa, according to Enaleni co-owner Richard Haigh.

The only thing to do – unless you are keen on starting your own ethical pig farm – is to keep supporting these stalwarts. So, next time you’re visiting Bread and Wine in Franschhoek, Frankie Fenner in Cape Town or Schoon de Companje in Stellenbosch, get hold of Neil’s charcuterie and look out for the double-smoked garlic sausage. So addictive it’s scary, he warns.

The rise of pork belly

Once considered a lesser cut of meat, pork belly is now served in almost every pub – and fine dining restaurant. Andy Fenner of Frankie Fenner Meat Merchants, who are dedicated to what they call ‘proper meat’, says that a few years ago suppliers couldn’t give pork belly strips away. “Today, they’re everywhere and are treated as luxury dishes.” Indeed, anywhere from Top 10 restaurant Terroir to Bloem gem Seven on Kellner serves pork belly, showing just how popular this rags-to-riches dish has become. At Pirates in Plumstead and Hout Bay they have taken it a step further and serve pork belly ribs. Madness.

Bertus Basson of Top 10 restaurant Overture reckons nose-to-tail eating has become more popular because of its price, and because peasant food is more flavoursome and approachable than posh food. And just how did peasants enjoy their pork?

Pork and autumn/winter fruit go together particularly well. In medieval Europe pigs were slaughtered at the end of autumn, which is also when apples are in season. The pigs were left to roam in the apple orchards to fatten them up, so the pairing makes sense. A more romantic idea is that the apple in the mouth symbolises the circle of life and death.

To test this theory, try these apple-stuffed pork chops, pork belly chilli roast with pecan nut baked apples or these pork and apple burgers. And while fresh apples are one thing, but the fermented juice works even better. Pork and cider has been a favourite combo for hundreds of years. Try these soft roll sandwiches filled with pulled pork cooked in cider.

And if we’re (un)lucky, it won’t be too long before they bring out a bacon-flavoured wine.