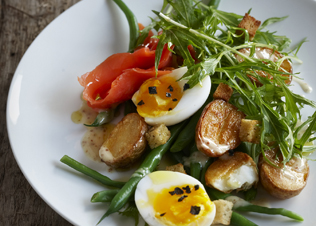 In the publishing world, early January is the time for trends pieces. Fashionistas pick the hot colours; design mavens expound the virtues of glazed ceramic lamps and camouflage; and web specialists proclaim the primacy of vertical scrolling in 2013.

The food world is no different. I’ve read scores of articles over the past couple of weeks hailing everything from fresh horseradish and sodastream drinks to gourmet popcorn and artisan soft-serve as the new mini-burger. The truth is, as most restaurateurs and chefs will tell you, following trends is less important than knowing your brand, and giving your customers what they want. And while pigs’ tails might be a hot trend in New York, where they have restaurateurs who look like this guy, we’re just not sure they’re going to catch on in quite the same way here. (Then again, maybe I’m wrong. Anyone doing amazing things with pork tails right now?)

So, instead of offering predictions, here are some things I privately hope will happen in 2013.

1. More dishes where veggies are the hero
Because, as food historian Hettie van Deventer-Terblanche pointed out at last year’s Eat Out DStv Food Network Conference, we are not merely a nation of meat-eaters. Some of us actually quite like vegetables. Also: more exciting salads. There’s really no need for them to be dull. 9th Avenue Bistro in Durban put gorgonzola, pear and candied pecan nuts in theirs; Walnut Grove’s salad ingredients include polenta-crumbed feta, barley and pomegranate; and in Cape Town at Dear Me you can get one with shaved proscuitto and fresh fig salad, with rocket, pecan nuts, honey and sherry vinaigrette. Take note, salad designers.

2. Craft cider
We love the way that craft beer has taken off in recent years – even my father has started drinking Darling Brew – so I reckon it’s time for the craft cider trend to materialise in SA. I have to admit that I’m biased in this: I’ve always preferred cider to beer, and I want to look cool like my dad.

4. More inventive desserts
We’re all about artisan ice cream and single-origin chocolate; surely there must be more where this trend came from? How about some gourmet popsicles? Or some beer and bread porridge? Then again, maybe not that last one.

5. More pasta dishes that I haven’t heard of
“Can you spell that?” I ask Chris Black of Bellevue Café, as he tells me about vinci grassi, a Roman version of lasagna, made with insanely decadent ingredients like mortadella and chicken livers. His new restaurant, Lupa’s, scheduled to open in Durban in March, is going to have a dedicated pasta room, where all the pasta will be made. I like this idea so much that I’m thinking of building one inside my flat. I will call it the lasagna lounge and all who enter there will be made to roll ravioli.

6. Ridiculously big wine glasses
For obvious reasons. But also really tiny thimble-sized wine glasses. Or goblets. Or teapots. I was thrilled to see a cocktail being served in a little bottle in a brown paper bag at Orphanage Cocktail Emporium last year. They also employ rose-patterned teacups to serve their ‘More tea, vicar,’ cocktail, which comes with a cucumber sandwich. Well-considered crockery adds a little something to the experience.

7. Really amazing local parmesan
“If you have parmesan, you have half a dish,” Giorgio Nava told me last year. The restaurateur (he owns this year’s steakhouse of the year, Carne, 95 Keerom, Mozzarella Bar and Caffe Milano) ought to know: he’s from Italy. Anyone know of an amazing parmesan-style cheese being made here in SA?

8. More single-dish restaurants
Observer food critic Jay Rayner referred to 2012 as the year of ‘pimped dirty food’ and gourmet burgers, gourmet hot dogs and gourmet boerie rolls all grew in SA last year. Yes, it’s a gimmick, but sometimes limiting the menu and doing one thing really well is better than offering everything under the sun and botching half of it. How about gourmet doughnuts? A dessert-only restaurant? Or a gourmet meatball pop-up?

9. More experience-based dining
We reported last year on Cape-based pop-up Outlandish Kitchen, who organise dinners on farms around the Western Cape, and more recently, on Gauteng based team, Down to Earth Farm Feasts. (How cute is their truck?) In 2013, I want to eat more meals on farms, on pavements and up trees. I want pop-ups to start selling outside cinemas (love the food offering at Kirstenbosch’s outdoor movie theatre, The Galileo) and I want more gourmet meals in shoe shops and secret dinners with foodies in their own homes like those at the Secret Festival last year.

10. More bacon-print fabric
Mainly because I wanted to share this link. But if bacon is not your thing, how about a lasagna, cucumber or tiramisu-print clothing? I see no reason why we should stop at meat dresses. Take it further, as my art lecturers would say.