There’s nothing worse than slaving over a hot stove, only to find your soufflé is a soup or your mousse is a scrambled egg. But take comfort: even the professionals get it wrong sometimes. We asked some of our country’s chefs and some Eat Out staffers to share the worst mistakes they made when they were learning the ropes in the kitchen. The answers are thoroughly encouraging!

My mom really really cannot stomach raw meat. She eats all her meat overcooked, except steak. Chicken and turkey are no exception. She loves turkey and we really only have it once a year at Christmas, but once we decided to cook one for dinner. I am particularly good with protein, but at this stage I had only been a chef for about a year and I had never cooked a turkey before. I couldn’t work out what the plastic little peg in the bird was. So I pulled it out, prepped the turkey and stuck it in the oven. My mother gave me so much grief. I told her to stop being a back-seat driver. I am a chef; I know when a turkey is cooked! Needless to say, it was served medium. My mom has never forgiven me for it, and I have never lived it down, either. 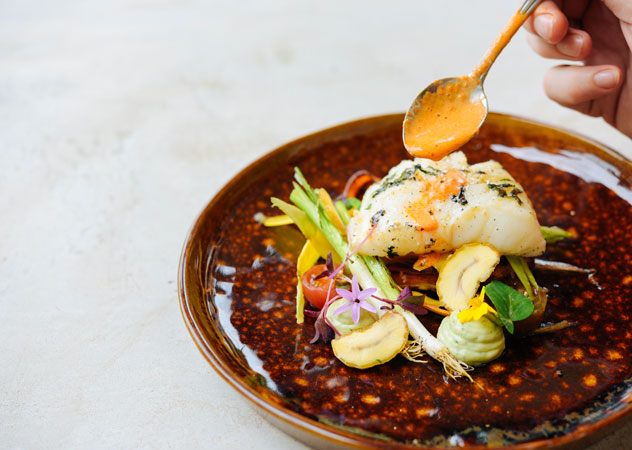 A colourful fish dish at The Chefs Table. Photo supplied.

I was prepping for a whole lot of celebs for FAIRLADY’s 40th shoot for Top Billing and I decided to put the mash into the blender. It turned out like wallpaper glue. In the end I mixed it with beetroot purée, so it was a pale splodge!

I was doing a function for upmarket dignitaries in the middle of the bush, on a hilltop under the stars. I was still training, but my mentor allowed me to prepare the meal on my own. The only light was the glow from the flames of the fire strategically placed around the seven-star table. Far below in the valley, I could see the lights of the 4X4s climbing up the rise like a big cat climbing up a tree to eat its kill. I stood there, admiring the stars and the trees, when I suddenly I thought: “Crap crap crap crap the friggen duck!” I ran to the table where the laughing flame was enjoying its new sacrifice. I opened the lid to see my poached duck legs turning into ash, with a bouquet of charred merlot and sour orange rind. 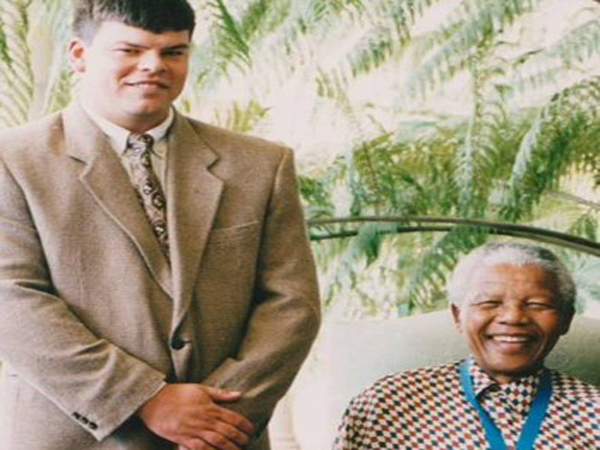 Brett Ladds with Madiba, for whom he also cooked. Photo supplied.

The closest shop was hours away by 4X4. I filled the pan with sand to mask the smell. The waiters had just sat down to enjoy their dinner before service, so I shouted for them to stop, and took all the drumsticks off their plates. I took the oldest merlot I could find from the high-end bar, and added it to a pan. The guests arrived to see me flambéing it, and I informed them that the duck would be prepared à la bush style, with the most unique taste and look.

As they went to the bar, I had the maître d’ turn the lamps right down. I cut the chicken legs to the bone and, once the wine had reduced and the flames died, I boiled the chicken in the wine to colour it, and added beef stock and some caramelised lemons from the bar.

My “duck” received compliments and praise, and I was even asked for a photo, which I took from a distance.

I have a lot of horror stories from my student days. Notably, the day I left a baked potato in the oven and went off to the library not once, but twice, in one day. (In my defence, I was trying to finish a thesis and wasn’t really mentally present!) The least edible thing I made in this whole time, though, was a mushy pea curry. I know it sounds fairly obviously awful, but in my defence, I was extremely broke, and the mushy peas had been left behind by a departing flatmate. I also had a lot of lovely spices from flatmates from India who had arrived with a whole spice cupboard and personal copper pots. The result though was genuinely inedible, like inadvisably spicy baby food.

I was once asked to participate in a children’s feeding scheme charity, where I had to prepare a dish of a fine-dining standard and price to guests, using only what the feeding shelters utilised. My ingredients included carrots, fresh pears, samp , and – wait for it – tinned sardines in tomato sauce. During the exploration stages, while attempting to create something completely unique and unexpected, I found myself most creative with the sardines. Taking it one step too far, I made a dehydrated sardine and smoked tomato sherbet, served in a nostalgic sealed plastic straw. Don’t worry – it didn’t make it to the plate! 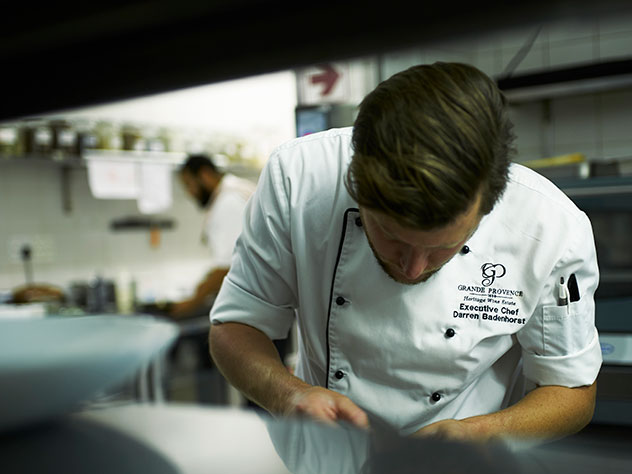 I knew I wanted to be a chef from a young age. Every Christmas was my time to shine in front of all the family. When I was 16, keen to impress, I thought out an elaborate plated dessert. The idea was to create this tall, elegant tower of different chocolate mousses – bitter orange, heavy hits of brandy, sponge and meringue. Not knowing the basic science behind the pastry process, my mind ran riot with the idea. I followed the individual recipes and set them up in the mould overnight to set, ready for the big day. 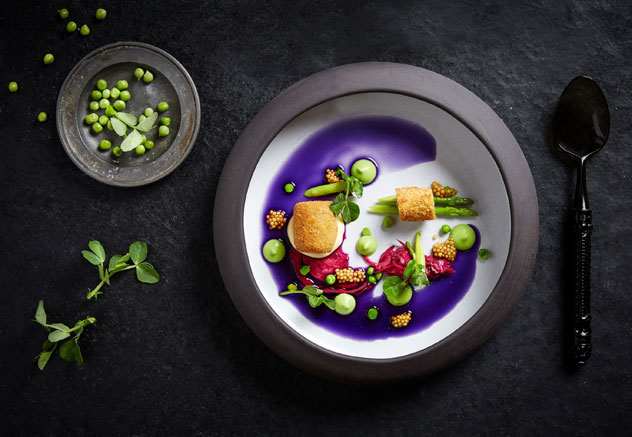 A dish at Benguela on Main. Photo supplied.

Our annual family get together around Christmas was always about 12–18 people and, once everyone had enjoyed lunch, they were anticipating a dessert fit for royalty. As I demoulded the delicate tower, signs started showing that the mousse wasn’t set, the meringue wasn’t holding and the tower was too high. I had omitted some crucial steps – the butter was left out of the mousse, and there was too much raw alcohol. It was a leaning tower of Pisa crossed with a bad game of Jenga. The warmer it got, the looser the mess and the harder it came to unmould. When I got to the last plate and I looked back at the first, I realised I had created a version of Eaton Mess, albeit a very sloppy one! It was a large, soupy mess. There was no back-up plan, but luckily my family eat what they are given, and, with a side scoop of ice cream to save the day, everyone kept their straight faces and there were plenty of compliments – to me, at least!

Once, before I really understood how pasta worked, I turned off a pot halfway through cooking in order to greet my dinner guests who had just arrived. I cranked the stove on again a little while later and, needless to say, it was not a success. The whole lot had absorbed all the water and turned to a solid disc of mush. (We did not have any more pasta in the house for the lovely creamy butternut sauce.) We should have laughed it off and ordered pizza, but the guests were really awkward about it, insisting it was fine, didn’t actually eat a bite, and then left early, skipping dessert in fear of what horrors were to come.

I was doing canapés and one had a gratinated mousseline on top that required a blow torch. The blow torch ran out of gas, so I was going to the dry store to get a new one and was unscrewing the old one, not realising that there was a trail of leaking gas behind me. A stock pot bubbling on the stove caught the gas and the whole thing exploded in my hands. Needless to say, I had no eyebrows for a while! 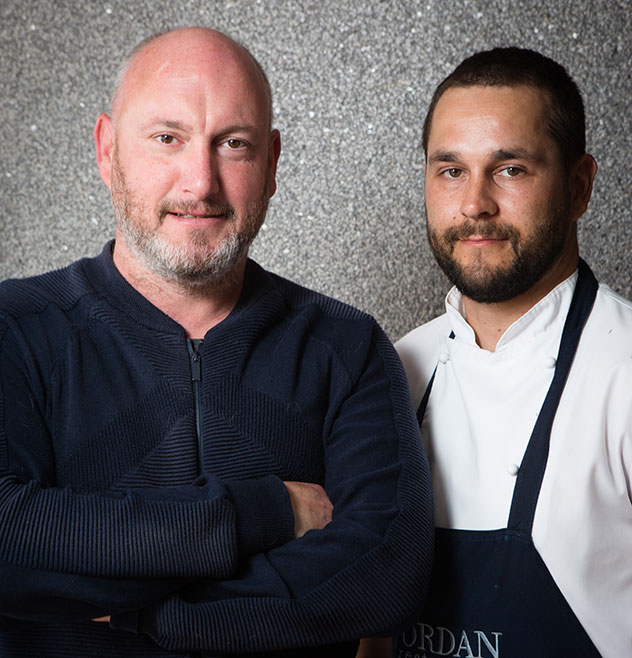 Kyle with George Jardine (and eyebrows!) Photo by Jan Ras.

A few years ago, my husband and I spent six months driving through Africa (which involved many culinary firsts). One night, to break the monotony of campfire food, I decided to make fishcakes. We had tinned sweetcorn, smash and tinned salmon – which, it turns out, do not a fishcake make. It was a bit of a wet mixture, but I thought once cooked it would dry out and form a cake. The end result was more of a fish porridge. I couldn’t even eat it, in the end!

When we opened Jordan, we had a young female chef from Beaufort West. She served a soufflé with salt instead of sugar, and poached pears in Vin de Constance instead of cheap port. She left us to start a new career at a call centre… 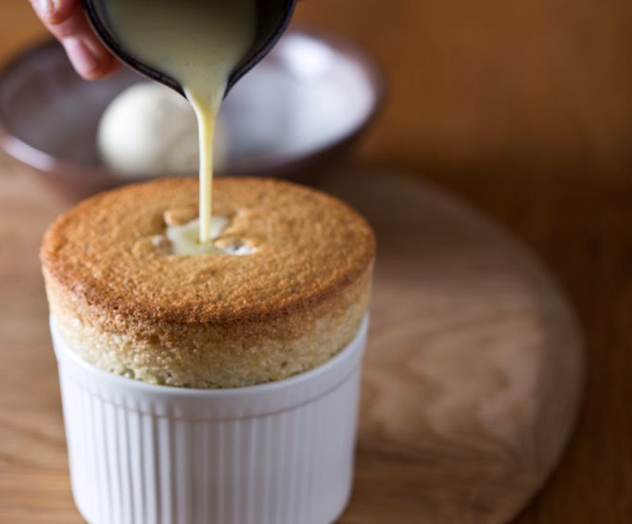 Jordan is known for it’s spectacular soufflés. Ordinarily made with sugar – not salt. Photo supplied.

I made a baked ricotta cheesecake for my sister’s baby shower. Despite cooking for longer than the recipe stated, for some reason it wouldn’t set, so we had to eat it in bowls with spoons like a lemony-cheesy soup. (Ed’s note: This actually sounds like a triumph. Cheesecake soup? Sign us up.)

What are your worst kitchen disasters? Tell us in the comments.