15 must-visit eateries in Umhlanga this summer

Umhlanga, once a sleepy coastal village, has transformed into one of Durban’s most dynamic food zones. The migration north has caused seasoned restaurateurs to expand or relocate, and there is now a diverse mix that has given Umhlanga decided culinary clout. Eat Out critic Tracy Gielink recommends her 15 top eateries to visit in Umhlanga this summer. 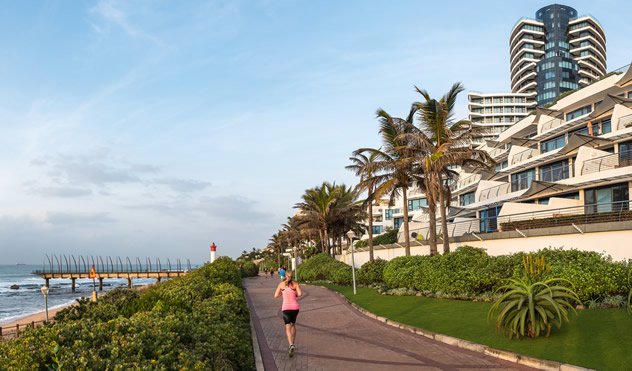 The beachfront at Umhlanga. Photo courtesy of South African Tourism on Flickr.

Fourteen on Chartwell
This chic, beautifully appointed restaurant attracts a suitably stylish crowd. Craft beers and light meals are served at the bar, while various seating areas are reserved for more serious diners. The fairly small menu covers all bases, but generous starters – like Asian lamb ribs and chicken wings with a blue-cheese dipping sauce – are the most appealing, so consider doubling up on these.

The outside view of Fourteen on Chartwell. Photo courtesy of the restaurant.

Bar-ba-coa
Essentially a modern steakhouse, Bar-ba-coa has built a firm following with its grain-fed, aged steaks cooked over open flames. Simply ask your waiter to recommend which cut is best on the day.

Repost by @westmaddy93 thanks for joining us last night for dinner. Hope it was epic! #BarBaCoa #steak #Umhlanga

Ferrucci
Ferrucci is a small bakery with tables spilling out onto a central square. The coffees are highly recommended and the simple café menu is a general crowd pleaser. Guests can peruse displays for their pièce de résistance, which could be anything from a cheese croissant to a perfect apple crumble… and don’t forget to take an artisanal loaf home with you.

Fish
A modest, no-frills no-fuss eatery, Fish is overrun with locals who love the simplicity of seafood prepared to order. If you like it super fresh, make your selection from the line fish on ice at the back of the shop. Evening reservations are essential at this arrive-early and leave-early restaurant.

We had fish and chips at the most divine little hole-in-the-wall yesterday.   A photo posted by Stacey Vee (@livinglionheart) on Nov 8, 2015 at 10:18pm PST

Green Mango
This eatery garnered a reputation for fine Thai and Japanese fare while these eastern cuisines were still gaining popularity. The Umhlanga reincarnation fills a small shop space with a covered deck, and rewards diners with fresh, authentic flavours.

Julio’s
This spot is a good fit for Umhlanga, with its Portuguese menu, laid-back vibe and cocktail menu. Perpetually popular dishes include the quintessential chicken peri peri and a selection of seafood, which is best savoured at the covered pavement tables.

Harvey’s
Harvey’s has long been producing fine dining – with the associated price tag – served with a flourish by corseted waiters. The décor borders on dramatic, cooking methods are classical, and flavour combinations are interesting, as shown in the dish of crisp fried brie with shiitake ravioli. Look out for the new breakfast menu. 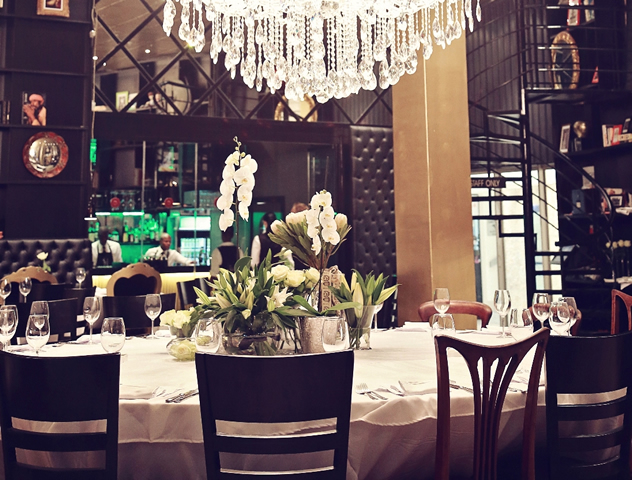 The interior at Harvey’s Restaurant. Photo courtesy of the restaurant.

Ile Maurice
Ile Maurice has been Umhlanga’s dining-out darling for years. This converted house with a quiet colonial air is a shrine to Mauritius and its subtly spiced cuisine, although classical French dishes are also represented. Service is slick and the wine list notable. 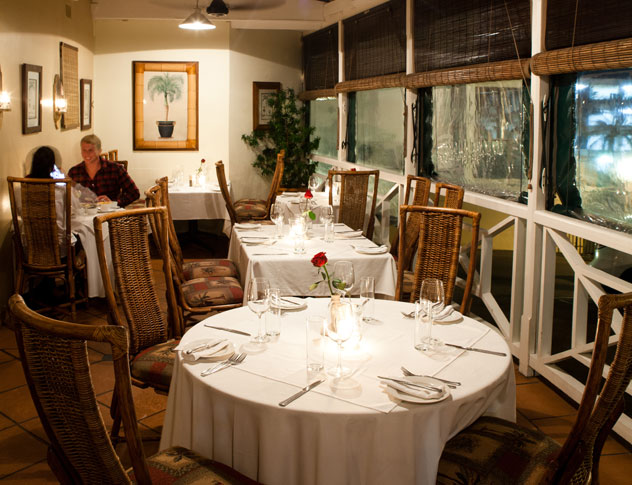 The interior at Ile Maurice. Photo by Jan Ras.

Little Havana
Deserving of an award for tireless consistency in food and service, Little Havana specialises in steak in all guises. Meat is cooked to perfection, but there is also plenty of variety for non-believers. The handsome interior combines copper with wood and leather, while a colonial-styled veranda is presided over by paddle fans. 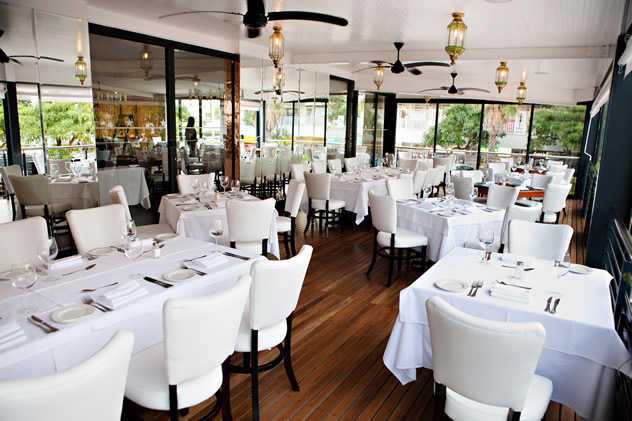 The interior at Little Havana. Photo courtesy of the restaurant.

Mo Noodles
This popular eatery has stood the test of time, including a move to this small centre. Double-volume proportions and sidewalk tables handle the overflow of the compact space that is normally buzzing. The Asian fusion menu is beguiling in its simplicity, featuring beef sashimi, coconut-and-lime prawn soup and sesame-peanut chicken in a red curry paste with coconut noodles.

Olive & Oil
Fare is simple, good and gratifying at this solid, suburban eatery, where attentive waiters serve plates of generous portions. There is a predilection for Mediterranean flavours, which are broadly interpreted in anything from pasta to steaks and seafood. It’s a child-friendly restaurant.

Pintxada
Owned by the same folk as Little Havana, this super-stylish restaurant and bar serves tapas (not all traditional) ranging from patas bravas to tender sticky ribs and unctuous pork belly served on lentils. The rotisserie chickens are a good choice for those requiring a more substantial meal. There’s a good selection of craft beer. 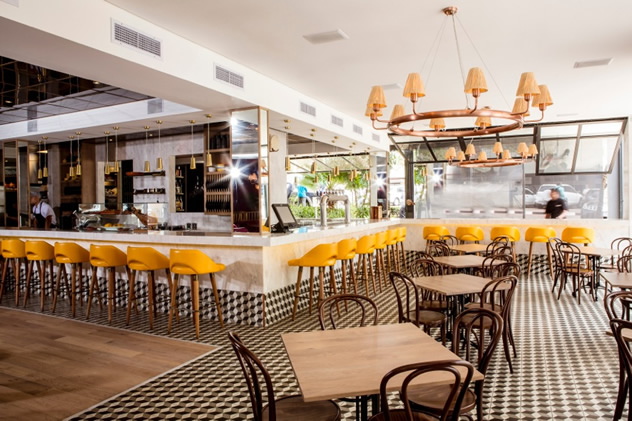 Inside at Pintxada. Photo courtesy of the restaurant.

Press Club
Press Club is proof that you can indeed be all things to all people. Expect efficient service and home-styled comfort food. All-day breakfasts are exemplary, and lighter eats like toasted prawn mayo and spicy Mexican salad segue into heartier options like great Durban curry and lamb’s liver cooked with onion and crispy bacon.

Remo’s
Offering an intoxicating mix of Italian cuisine and a cosmopolitan New York vibe, Remo’s makes breakfast an occasion and their pizzas are amongst the best in town. Traditional dishes incorporate a delicious lasagne made according to a homemade recipe, and the café menu includes calamari served with zucchini fries. 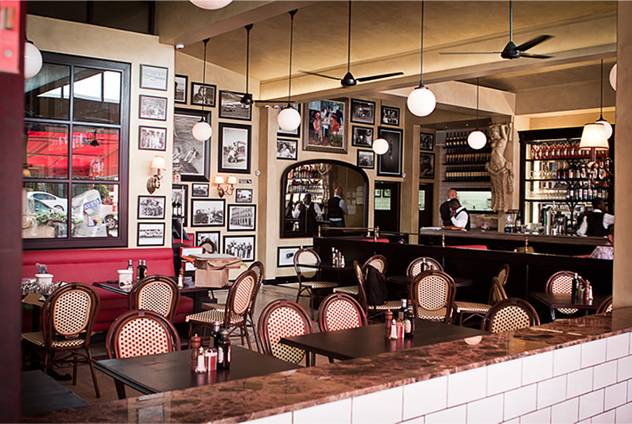 The interior at Remo’s Fratelli. Photo courtesy of the restaurant.

Vovo Telo
The café menu is a hit with locals and tourists alike, but it’s also worth sneaking around the corner to the offshoot, The Inside Scoop, for baked goods, homemade ice cream and the most delicious Belgian waffles.

Which are your favourite eateries in Umhlanga? Tell us about them in the comments below.