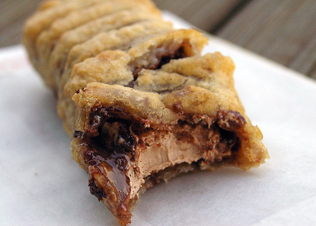 Roald Dahl may have been kidding when he came up with Lickable Wallpaper, Stink Bug Eggs, and Eatable Pillows, but the world – and the internet – is riddled with really terrible recipes. Here are 15 of our favourites.

1. Jell-O salad
Thanks must go to America for this gem. According to the Huffington Post, it has its roots in a 1904 recipe called ‘perfection salad’, which involved jelly, veggies and occasionally inspired additions such as stuffed olives and mayonnaise. It was so popular at one point that Jell-O introduced savoury flavours such as celery, Italian salad and seasoned tomato. These have thankfully now been discontinued, but Jell-O salad lives on, occupying a kind of cult position on the internet as one of the most sublimely revolting dishes of all time. Strong stomach? Check out buzzfeed’s list of 39 things that should never be cooked in clear jelly. Personally, we feel that macaroni cheese should be higher up the list…

2. Marshmallow salad
Think it’s just the Americans who confuse dessert with salad? Think again. We came upon this delight recently whilst out and about. Whip up some mayonnaise and condensed milk dressing, or whipped cream, or sour cream with marshmallows and fresh fruit, and you have the world’s most calorific salad. Not bad, guys.

3. Cowboy sushi
Love sushi? Imagine maki, but replace the seaweed with sliced beef, spread with cream cheese, and replace the salmon with dill pickles. In fact…

4. Anything pretending to be sushi that isn’t sushi
This includes boerewors sushi, biltong roses, biltong and cream cheese fashion sandwiches, or sweet sushi made with mini marshmallows, rice crispies and fruit roll. It’s just too disappointing when you’re expecting something fresh, zingy and light.

6. Mini muffins with hotdogs inside
There’s a cupcake store a little way down the road from our office that sells cupcakes with whole Lindt balls baked into the batter. This is, well… nothing like that. Fill your muffin tin store-bought muffin mix, and drop a section of hotdogs into the batter. Serve hot with tomato ketchup, perhaps? Hmm. Actually, that sounds kind of good…

7. Ice cream ramen
You’ve heard of all-in-one shampoo and conditioner, right? So why not all-in-one dessert and mains? Aside from the contrast of the salty umami broth with the boiled eggs and sweet ice cream, we particularly enjoy the prospect of the soggy ice cream cone. Then again, who are we to judge? We are, after all, a nation of Cream Soda float drinkers…

8. Roast canned chicken flambé with black cherries
Yes, canned chicken. This gem is just one of the multitude of fantastically disgusting recipes from Poppy Cannon’s Can-Opener cookbook. All hail Poppy!

9. Shrimp Christmas tree
Notice the visual similarity between shrimps and candy canes? The inventor of this festive delight clearly did. The Beta Sigma Phi Holiday Cookbook, which first published this treat in 1971, recommends serving it with cocktail sauce. Nice idea, guys.

10. Cheesy ham and banana casserole
Now we’re hardly ones to criticize the use of cheese, bacon or chips under ordinary circumstances, but cheese, crushed chips, bacon and banana, baked into a casserole? And while we’re on the subject of banana in savoury dishes, we’re also not sure about these banana empanadas. What do you reckon?

11. Deep-fried Mars Bars
As a nation, the Scots have had lots of really great ideas. Ok, perhaps bagpipes weren’t such a good call, but I think we can all agree that Scotch whisky makes up for it. And that Loch Ness Monster thing was a stroke of genius, turning a remote, foggy loch into a tourist destination in one fell swoop. But deep-fried Mars Bars? I know what you’re thinking: it sounds amazing. It’s not. Imagine oil-soaked batter, greasy chocolate and enough cholesterol to stop your heart. And while we’re on that topic…

12. Deep-fried things in general
You can deep-fry anything if you set your mind to it. Mac ‘n cheese, cupcakes, cheeseburgers, Oreos, even butter…  The question is: will it taste better?

14. Bacon fat gingersnaps
Made with 3/4 of a cup of bacon drippings, these babies are either going to be amazing, or downright revolting. Hands up: who’s going to give them a bash?

15. Anything with the word ‘surprise’ in the title
Because it invariably isn’t a fun surprise, and most often means the entire meal was made out of a tin. This goes for tuna surprise, hamburger surprise and that post-Christmas horror, turkey surprise. (We can totally see this becoming trendy again, in a retro-kind of way, so keep your eyes peeled, hipsters.)