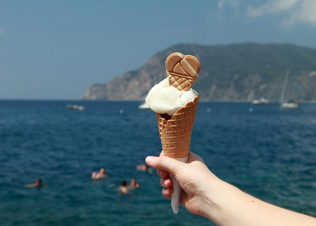 The bell in the cathedral chimes 10 times. My brother nods sagely.
“Gelato time”.
We’re in Florence, Italy, it’s high summer, and though I can’t reliably tell you what day it is, I am fairly confident about the time: it’s gelato o’clock. Following directions, we head off in search of an establishment called Festival del Gelato. We’ve almost given up hope, when, from between the historic stonework we spot the bright blue neon lights. Inside, there are 50 odd different flavours of gelato and sorbet: this is going to be tougher than I thought.

It was the discovery of Venchi on my first day in Venice that started the gelato obsession. One scoop of creamy mascarpone gelato oozing syrupy caramelised figs was enough to convince me to do my best to sample as many flavours as possible. My brother  – who I meet up with later in Milan – has an alternative strategy.
“You have to try the same flavour, or you can’t compare them,” he tells me, when I chastise him for ordering chocolate for the umpteenth time.
“Why? You’re not writing the guide to the best gelato in Italy.” He looks thoughtful. The challenge, it seems, has been accepted.

But this is Italy, and there’s more than just gelato to sample.

In Venice, The Rialto market shows off the sheer range and quality of produce available: bright yellow courgette flowers, fat, purple brinjals and bulbous red heirloom tomatoes. At the neighbouring fish market there are mounds of fresh polpi (octopi), with their suckers exposed, slithery silver and black anguilla (eels), long thin razor clams, a swordfish with a metre-long spike on his nose, and the squid, rich with their oily black ink.

At I Figli Delle Stelle on Guidecca island I try the razor clams for the first time. Long thin fingers of firm white, calamari-like flesh, inside sharp rectangular shells cooked up in a rich tomato sauce, with home-made bread to mop up the sauce. The restaurant turns out to be a fantastic find – the owners, who hail from Puglia, Veneto and Lazio, are fanatical about sourcing fabulous ingredients, and it shows.

Wandering the old Jewish quarter, I stumble upon a traditional Jewish bakery, selling dolci ebraici (ethnic sweets). I devour my brown paper bag of sweet almond mandorle cookies and little crimped boats, impade, beneath a quiet little archway overlooking the canal, and pretend, for a little while, that I live here.

From Venice, I head West, taking a series of trains to Bergamo, an historic hilltop town in Lombardy. After wandering the baking cobbled streets all afternoon, my stomach is growling and I head off in search of supper. My guidebook is a year or two out of date, and the first two restaurants I seek out have since closed. Certain I’m going to starve, I give up and follow my nose. It leads me to Damimmo, which I notice, has a Slowfood sticker up in the window.

This turns out to be a fairly good indicator of fantastic food: at Damimmo I have one of the best meals of my life. It’s just scarpinocc – handmade ravioli – filled with local cheese, and covered in crispy sage leaves, parmigiano and butter. But the rich, aged parmesan smells so good I want to put my face into the bowl, and the simple flavours are so delicately-balanced it’s a work of art. I roll back down the hill to my hostel in a parmesan-scented haze.

In Milan, I meet up with my brother, who does little to curb my culinary indulgences. We follow the cryptic instructions by a blogger named Jessica, behind the Galleria Vittorio Emanuele II to find Luini, sellers of Milanese speciality, panzerotti. Made with dough similar to that of a doughnut, and stuffed with fillings such as Parma ham and mozzarella, they’re hardly a healthy snack option. This makes me wonder: how is it that these Italians are so exceptionally good-looking, with all this cheese, dough and pasta around?

From there we visit the Cinque Terre – the seaside villages on the West Coast, famous for their precipitous locations on the cliffs, Pisa, and Lucca, an old Tuscan town, famous for the leafy wall which surrounds it and for having an inordinate amount of gelaterias. Here, I try a local speciality, gelato flavoured with aniseed. It’s spicy, and unusual, but my brother is not convinced it’ll ever take on chocolate in the popularity stakes.

In Lucca, we also have sublime, simple tortellini in rich ragu sauce at Enoteca Calasto, and tender scallops with crispy pancetta and pea puree in the courtyard garden at the slightly more upmarket Ristorante Canuleia. In Florence, we devour rich wild boar ragu at a great, authentic little bistro, overlooking the Arno called Il Ristoro Dei Perditempo and I even try traditional black squid ink sauce at Trattoria al Cacciatori on Guidecca island, in Venice. It’s a new flavour for me; rich umami – a little like soy sauce – but with a thick, lumpy texture.

By the end of the trip, I calculate I must’ve sampled roughly 30 different flavours of gelato, from roasted pine nut to aniseed, and a host of other regional dishes – from vivid yellow risotto alla Milanese – flavoured with saffron –  to salty sardines, fried inside a bready batter; rich wild boar ragu and a mindblowing 15 courses at the World’s 5th Best Restaurant, located in Modena.

Despite all this eating though, I appear to have lost a few kilograms. More puzzled than ever about the apparent weight-loss secrets of Italian food I resolve to keep eating as much gelato as possible. My brother, meanwhile, informs me that he has selected his winners.

Top 3 chocolate gelaterias in Northern Italy according to Christopher Jacobs
1. Emelia Cremeria, Parma, Reggio Emilia
By far the most authentic gelato. Creamy, and smooth, with the richest chocolate flavour of all. They also ask whether you would like dark or milk chocolate poured inside your sugar cone. Never a bad sign, in Chris’s book.
2. Festival del Gelato, Florence, Tuscany.
For the sheer joy of gelato, in 50-odd flavours from profiterole (with whole profiteroles) to kiwi sorbet. Genuinely chocolate-y chocolate gelato.
3. Venchi, branches in Turin, Padua, Venice, Bologna, Allesandria, Naples, Milan, Vicenza, Treviso, Rome, Vigevano and Florence.
It may be a chain, but this is some superlatively creamy gelato, and their chocolate flavour is made with 75% cocoa solids. Plenty of authentic flavours to choose from too. Just say no to the whipped cream they offer to put on top of your ice cream. Why you’d want fake cream on top of your gelato is a mystery.