5 reasons why chefs should visit farms

Ahead of the announcement of the winner of the 2017 Eat Out Woolworths Sustainability Award later this year, we’ll be running a series of articles highlighting ways that restaurants can be more sustainable. In the fourth of this series, we look at the importance of farm visits. (Want to know more about the award? Find out more and enter here.) 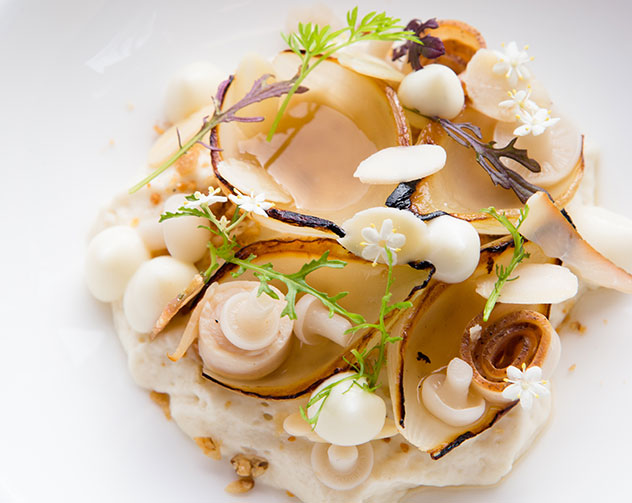 Onion soubise with chicken, beer-braised onions, almond, and thyme flowers – one of the dishes served at Camphors at Vergelegen. Photo by Jan Ras.

Chefs, traditionally, were the middle man between the farmer and the consumer. Today, though, it’s seldom a direct transaction. It’s not uncommon for several middlemen to be involved in the communication between the farmer and the chef. This can mean that misunderstandings arise, and standards are lowered as chefs are aware of the reality of the conditions on the farm. The judges of our Eat Out Woolworths Sustainability Award singled out one way that chefs and restaurants can turn this around: by conducting farm visits. Here are five reasons why going to see the source of your produce can improve traceability and transparency.

1. They build a relationship between the chef and the farmer

A relationship with the various farmers who provide produce is key when it comes to plating up sustainable food. Distributors and other middle men often aren’t entirely aware of conditions on the farms and may source produce from many farms which use multiple types of production – sometimes chefs are unaware of this. Karen Welter, one of our judges, says visiting farms is not about being an auditor but rather “for relation building, to understand the process of food production”. She believes in the symbiosis between chef and farmer: “The chef needs to understand the challenges the farmer may face in getting better produce into the market and may be able to help the farmer by using his produce and telling its story. In turn, the producer needs to guarantee that the produce lives up to what they have promised, particularly in terms of the treatment of animals and any inputs into the system, such as feed, fertilizer and pesticides”. 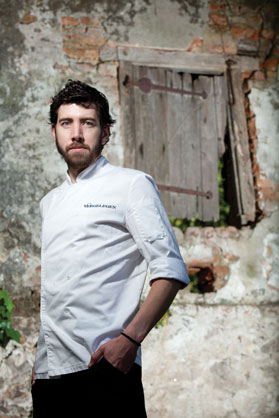 Michael Cooke of Camphors at Vergelegen. Photo by Jan Ras.

Michael Cooke of Camphors at Vergelegen echoes this idea: “Over time, I’ve built up relationships with certain farmers and we’ve begun an open communication channel between the farm and the table – I give feedback in order to assist them in what they’re doing based on what is happening in the kitchen, and they communicate to me what difficulties they might be experiencing and any challenges they’re facing”. When beginning a relationship with a new farm, chef Michael makes sure to organise a visit via his supplier. He acknowledges that building up such a relationship is gradual and does take time.

2. It can cut down on costs

Consumers often don’t understand that various certifications are expensive. Being certified organic, for example, is a pricey step that isn’t viable for all farms, especially smaller ones. This results in farmers hiking up the prices of their produce to cover the costs, which forces restaurants to do the same. Because consumers aren’t aware of this, they become hesitant to pay for dishes they perceive to be priced higher than they appear to be worth. When chefs visit farms and see operations for themselves, they can cut down on these costs. “I’ve found that through farm visits I can see first-hand that the farmer is doing everything exactly to biodynamic or organic standards, just without the expensive certification,” says Michael. “Knowing this, I might be happy to use them if I know I’m able to visit regularly enough to check this is maintained”. It should be noted, though, that going this route does mean that you cannot state on the menu that the produce is organic, but chef Michael has made this compromise, seeing as he feels he personally knows the how the food has been produced.

3. Chefs can witness their farmers’ plights

Farmers face numerous environmental challenges. In the Western Cape this year, for example, there has been a crippling drought and many devastating fires. These crises, along with more everyday and natural changes, affect farmers’ standards and quantities they’re able to uphold. Visiting the farms you source produce from allows this to hit home and can encourage more sustainable cooking. Karen recounts the story of Dan Barber, executive chef and co-owner of Blue Hill in New York: “A visit to a grain farmer-supplier helped Dan realise the need to adopt a ‘nose to tail approach’ to the whole farm. In order to produce his final crop, Klaas – the farmer – was rotating cover crops to improve the soil quality. Dan’s response to this insight was to put a ‘rotation risotto’ on his menu to create demand for the uncelebrated crops. Instead of just cherry-picking the end products as farm to table, restaurants and consumers need to look at embracing the whole crop of the farmer”.

Similarly, prime cuts shouldn’t be the only ones restaurants order, as that means the rest of the animal is discarded. Chefs like Giles Edwards of La Tête and Adriaan Maree of Fermier both embrace nose to tail cooking and know the less popular cuts to have a lot of potential and can be the most flavoursome parts of the animal.

4. It can be educational

The field of sustainability has a lot of technical terms and, even for chefs, it can be difficult to know what they all mean. Many restaurants use terms and think their restaurant and produce abides by that term when it, in fact, does not. In order to use the term organic, for instance, the farm in question must have acquired that certification. 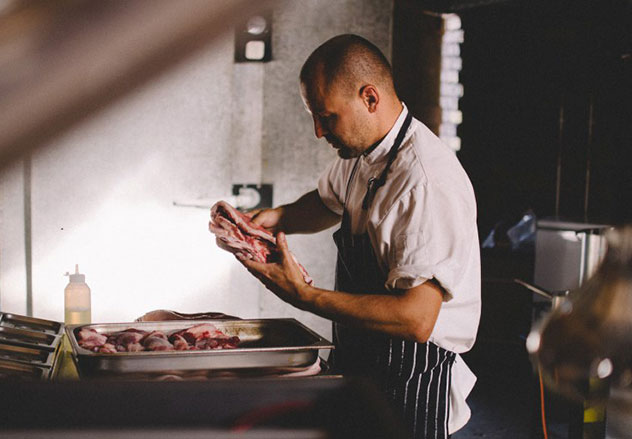 At Fermier in Pretoria, the restaurant is embedded in a farm. Photo supplied.

Visiting farms also means that chefs can see for themselves the differences between animals like chickens being barn-raised versus free range and pasture-raised. This is important because many of these terms are not governed by a body.

Additionally, if the farm uses different types of production, chefs need to let the farmer know that this is not up to the standard expected. Hopefully this will encourage them towards farming sustainably on the whole. If not, consider having a written agreement drawn up that states that only the produce whose method of production you’ve approved will be sent to you. Else, consider changing farms.

5. To observe the treatment of animals

The treatment of animals on farms has been a hot topic for a long time and will likely continue to be. Chefs tend to trust documentation or verbal promises, but the best way to enforce animal care is to visit the farm. In fact, by experiencing the judging process, restaurants have learnt more about their producers when the judges visited each farm. 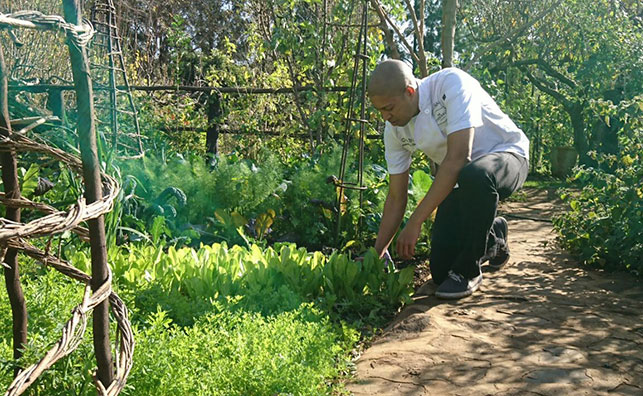 At The Brightside Farm, who supply Coobs. Photo supplied.

Chef James Diack from Coobs acknowledges this: “Before the sustainability awards we often relied on their word that they met our standards. Now, when we take on new suppliers, we make sure we visit their premises and check their certifications to make sure that their word is correct”. They have also expanded on their own pork breeding programme, increasing the number of pigs on their farm from 180 to 270, which cuts down on how much they have to rely on other farms and standards they may not be able to control. 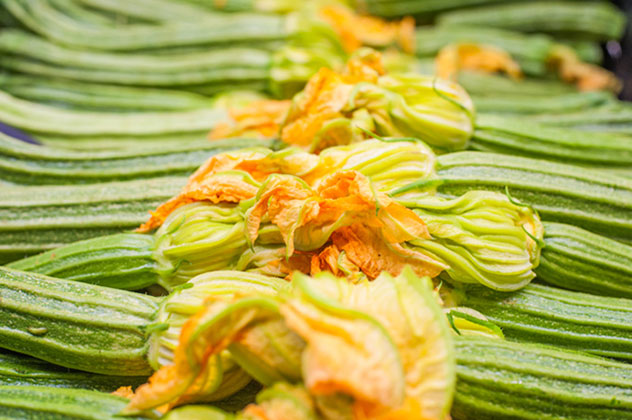 Woolworths has been on a Good Business Journey since 2007. Together with their main suppliers, Woolworths strives to operate in a way that respects worker rights, maintains safe working conditions and protects the environment and welfare of animals. Through the Woolworths Farming for the Future programme, Woolworths is working with farmers to continuously improve their methods, use water more efficiently, lessen chemicals and fertiliser usage and improve the quality of soil.

Woolworths commitment to ensuring the finest ingredients extends to the responsible sourcing of key commodities such as cocoa, palm oil and eggs. Currently, 100% of the cocoa sourced for Woolworths branded boxed, bar and slab chocolate is UTZ certified. UTZ provides assurance that the cocoa has been grown and harvested responsibly. The programme ensures that farmers learn to improve the quality and yield of their cocoa while reducing their impact on the environment and enabling them to take better care of their families.

Since 2011, Woolworths has been purchasing GreenPalm certificates to offset the many tons of palm oil used by suppliers. They are now working with suppliers to switch to a supply of certified sustainable palm oil using the ‘mass balance system’ and are members of the Roundtable on Sustainable Palm Oil (RSPO).

Woolworths was also the first, and remains the only major retailer in South Africa to only sell free range whole eggs.