Is it technically fair to declare an absolute best latke Benedict when no one else in Cape Town is making one? We’re not sure, but we’re doing it anyway.

Of all the delicious cuisine that the Jewish culture has brought us, such as bagels and kitke, there is possibly none more precious than the humble latke. Thankfully in Cape Town there’s a thriving Jewish community that supplies the city with all these tasty foods and more. Kleinsky’s Deli in Sea Point in particular has been serving up a modern take on traditional Jewish cuisine for a while now and their food is consistently good. They bake their own bagels, they hand-chop their own liver and, of course, make their own latkes. These crispy potato cakes form the base of one of Kleinsky’s most iconic dishes – the latke Benedict, and it is quite simply one of the best breakfasts in the city. 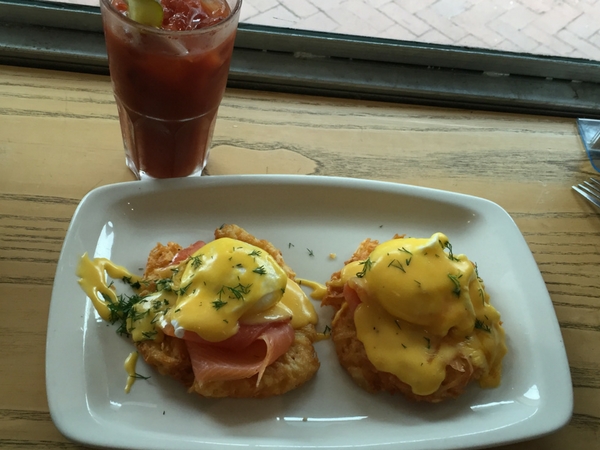 The famous latke Benedict. And yes, the Bloody Mary is compulsory. Photo by Jess Spiro

Though the latke is used in quite a luxurious manner at Kleinsky’s, it comes from fairly unpretentious beginnings. In its most basic form, the latke is a potato pancake, which appears in the history of most peasant diets across Europe. This is a no-brainer – potatoes are cheap, filling, versatile and easy to come by. The latke does, however, have a somewhat dramatic history. Many people will tell you that the latke’s relevance in Judaism comes from the custom of eating fried foods on Hanukkah in honour of the miracle of oil. The miracle of oil refers to a story from 200 BC when a tyrant Damascan king ruled over the Jews and forced them to worship Greek gods. Jewish rebels fought for their freedom for three years and eventually reclaimed the holy temple in Jerusalem. They emptied out the temple and re-dedicated it by lighting a menorah. Legend has it they could only find enough oil to keep the flames burning for one night, yet miraculously the oil lasted for eight days. In that time, they were able to make more oil and keep the eternal flame lit. This is why Hanukkah is celebrated over eight days and anything cooked in oil is eaten, most notably latkes.

It may be halfway through Hanukkah but the latke rush hasn't shown any signs of slowing down! ? #kleinskys #delicatessen #hanukkah #latkes #capetown

There is also debate as to whether the original latke was cheese- or potato-based. Another story told within the same time of 200B BC is one of Judith, a fearless Jewish woman known for beheading the Assyrian army’s general. She reportedly fed him a salty, cheesy pancake and plied him with wine then went in for the kill when he passed out drunk. After presenting his head to her people, the Israelites were then able to lead a surprise attack on the Assyrian army, which helped them save their land. For centuries after that, cheese was apparently believed to have been the original base of latkes. In the 1800s, however, Europe experienced a major crop failure and a large amount of potatoes were planted because they are cheap and easy to grow. It’s believed that Ashkenazi Jews replaced the more expensive cheese with potatoes, and the rest is history. Chequered background aside, it’s safe to say that the potato substitution is a welcome one.

Now, back to 2018 and the latkes we eat today. Every Jewish granny has her own special recipe but, generally, latkes are made by combining grated potatoes, finely sliced onion and egg together, before shallow-frying in oil. Kleinsky’s offers a traditional super crispy version of this. Their Benedict includes two of these latkes, perfectly poached eggs, lashings of Hollandaise, and your choice of spinach (R62), smoked salmon (R76) or lamb bacon (R72). As far as eggs Benedict go, this is really one of the best in Cape Town – even if you are something of a purist.

Is there another latke Benedict in Cape Town we have yet to discover and absolutely must try? Let us know in the comments below!