Adriano Zumbo, the pâtissier known for his deadly dessert challenges on MasterChef Australia, is in South Africa for the first time to appear at the Johannesburg Good Food and Wine Show from 23-26 July 2015. We chatted to the pastry chef to find out more about his creative process, guilty pleasures and favourite macaron flavours.

Adriano’s demos at the Celebrity Chefs Theatre will include one of his trademark Zumbarons (his take on the macaron) with a South African twist: he’ll be making a milktart version, with cinnamon, nutmeg and custard. He’s also doing something “a bit more Aussie”, a lamington tart with honey, lemon and eucalyptus.

The Zumbarons are definitely the biggest sellers at his chain of pâtisseries in Australia, with the salted popcorn flavour the most popular. But which one is his personal favourite? “Well, I like to eat six or ten of them at a time – they’re small, perfect for knocking a few back – so I like the fresh flavours like passion fruit and mandarin. And chocolate’s always winner.” 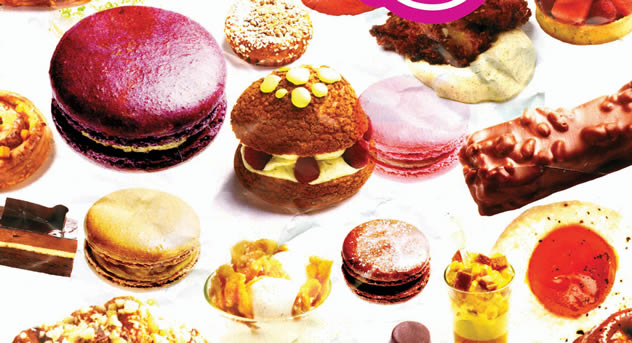 Adriano has some amazingly creative dishes, like that eight-layered V8 vanilla cake and his crazy croquembouche towers. But where does the inspiration come from, and what is his process? “It depends on the thought that kicked it off. It could be an ingredient, flavour or shape. The look of it is also important; a lot of thought goes into that.”

Sometimes it’s a catchy phrase, like ‘chip off the old block’, that will get him started. (He makes up most of the names himself.) “So for that one I knew I needed a square block with a corner taken out of it, and worked backwards from there. You’ve got to create something that people are going to remember.”

At the moment Adriano is experimenting with Japanese favours like yuzu, miso paste and mandarin, and has been working on something with macadamia, lime and black pepper. “That’s a good one,” he concedes.

Earlier this year the pastry chef came up with a crossover between two of our favourite things, a burger and a pie . Since we can’t taste it ourselves, we asked Adriano to describe his insane invention: “The brioche roll on top is soft, and the inside is like a meat pie, but with those burger flavours of the patty, tomato sauce, caramelised onions, beetroot and egg.” (The last two ingredients are apparently pretty common toppings at most Aussie burger joints.) 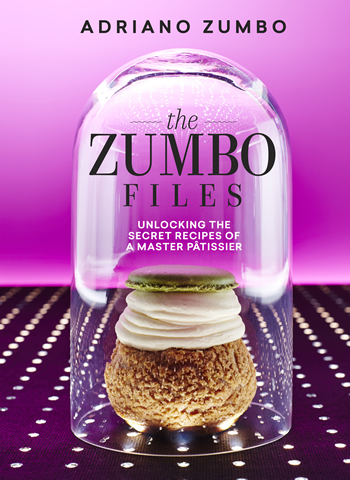 The Zumbo Files by Adriano Zumbo. Photo courtesy of The Good Food and Wine Show.

Up for the challenge

Moving from easy pies to delicate desserts, what’s the most complicated recipe in his repertoire? “It’s all quite hard,” he laughs. “If you’re not paying attention, you’ll struggle.” This is something even the highly skilled contestants on MasterChef Australia have learned first hand, facing elimination for failing Adriano’s cake and croquembouche challenges.

“I still struggle every day,” he admits. “Even if I’ve made it 10 times, I’ll make it again and start to pick at it until it’s perfect.”

Most cakes have too much sugar or butter and the flavour becomes the background, says Adriano, so that’s why he became interested in more unusual concepts with new tastes and textures. “I like the fresher stuff – spice, fruit, clean flavours. I want to really taste it.”

If you want to rise to new heights in your home kitchen, says Adriano, you’ll definitely need a thermometer and a scale. “You need to work with ingredients at the right temperature to get the best product. A scale is also key – in our recipes we work with 1g, 2g, 20g. It’s not like a sponge recipe – a cup of this, a pinch of that – it’s much more accurate.”

We’ve seen what Adriano gets up to in his own studio, but what about at home? “I cook for myself most nights. More traditional Italian stuff: meatballs, crumbed chicken, involtini, pasta. A lot of grilled chicken and veggies like asparagus and broccolini.” Is this because he devours so much sugar at work? “Absolutely! I eat the same cereal for breakfast every day and I like to have simple and clean suppers to balance out my diet.” 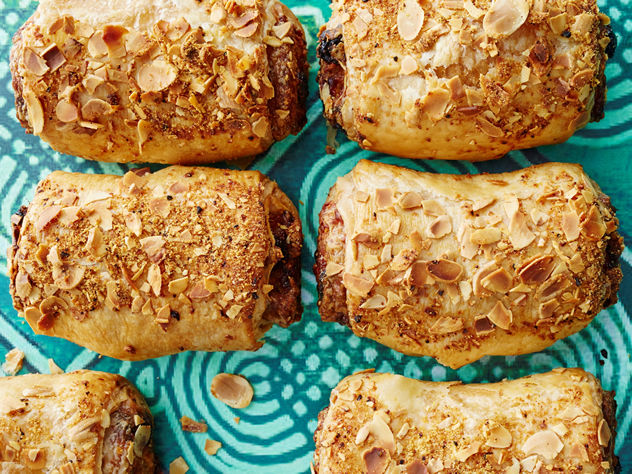 Pastries by Adriano Zumbo. Photo courtesy of The Good Food and Wine Show.

But that doesn’t mean he can’t enjoy a treat. Unsurprisingly, working as he does with sweets, his guilty pleasure is of the savoury variety. “I have pizza every week – and then I eat three in one go. I like the really traditional thin pizza, light and wood-fired. Yeah, I can smash a few of those!” (A man after our own heart.)

The reality cooking competition has swept the globe, and is now made in local formats everywhere from India to Israel. But what effect did it have back home in Australia? “MasterChef has done great things for the industry as a whole: more people are interested in cooking, and trying different types of food – savoury and sweet. They’re more adventurous; everybody wants to cook and make new things.

“Australia was a county that didn’t really have much of its own food culture – now its multicultural influences are driving the industry to greater heights.” 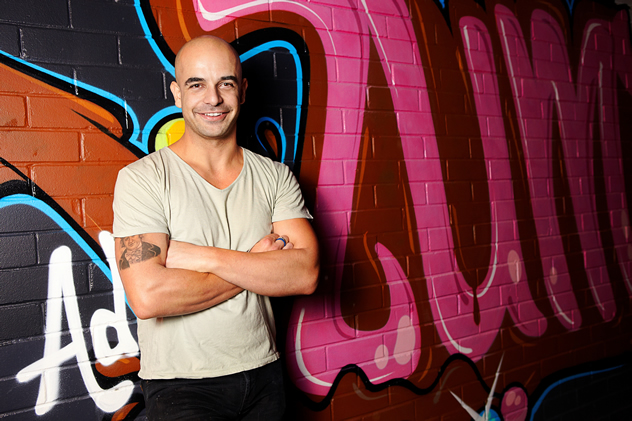 With his stores, TV appearances, classes and cookbooks, Adriano is a busy man. But he’d like to have his own TV show one day, focused on pastry. “I’d have various characters doing different things – and I’d play all of them! I like to make things fun. You’ve got to be serious in your work and keep pushing, but it’s good to bring a bit of lightness into the day.”

The next challenge is to consolidate the Zumbo business, so it can run itself and Adriano can spend more time on research and development. We can only imagine what he’s going to come up with next.

Catch Adriano Zumbo at the Johannesburg Good Food and Wine Show this weekend. Click here to see the programme and find out more.