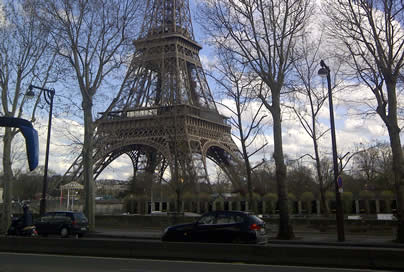 There are certain memories that stand out against the blur of day-to-day experience. My earliest and most intense sensory experiences all occurred in Paris. It is with absolute clarity that I recall the thick, creamy hot chocolate served en bol (in a bowl), the tantalising crunch of baguette being torn and the scent of buttery croissants and pain au chocolat, fresh from the oven. I was three years old.

Now, more than thirty years later, it’s those same memories, a little frayed around the edges, that guided my feet through Parisian streets that were both foreign and yet instinctively familiar. I was intent on searching for those same flavours and experiences that awoke my inner gypsy and an intense curiosity for the cultures and cuisines of the world.

Paris in springtime is magnificent. It is a riot of colour and floral fragrance. On almost every street corner someone plays waltzes on an accordion. The impossibly blue skies draw the people out into the Jardins des Tuilleries at lunchtime to soak in the mild sunlight and indulge in one of the national pastimes: eating.

Paris has in many respects stayed the same and changed immeasurably in the intervening years. The arrival of chain-stores like Starbucks and Paul’s has rendered the corner boulangeries and patisseries almost obsolete – it now requires a diligent search to find true bakeries where the baguettes, croissants and pastries are baked daily. By the same token, the small bistros and brasseries have all but vanished. This is an indictment on a world that prefers instant, consistent gratification, however mediocre, to the artistry and care evident in homemade food. But for those wanting a true Parisian experience, a few rounds of hide and seek will still reveal some remarkable gems across the city…

Begin your days at Coquelicot (24 rue des Abbesses) in Montmartre, in the shadow of Sacre Coeur. It’s pure nostalgia. In this warm, bustling bakery and bistro, where the pastries fly out of the door, you can indulge in coffee or thick hot chocolate en bol. Thus fortified, you are ready to face the winding streets that will take you up to the Basilica, passing the homes of Van Gogh and Toulouse Lautrec (these are private residences, but there are plaques marking their positions) en route and take in the artists’ square, where you can have a portrait or caricature drawn. From the stairs of Sacre Coeur, take in the vista over the rooftops of the city.

While Paris has a highly efficient public transport system, it is a wonderful city for walkers and I would recommend you find your way around the city – particularly to the Marche Montorgue (which is at the Sentier exit of the Metro, for the lazy). This is the original market place of Paris and the streets are lined with every conceivable delicacy. Walking tours offer inexpensive tasting experiences that’ll take your tongue on a culinary journey to dream about for years to come. Wine, cheese and chocolate: it’s all there for the tasting. Come hungry; come very hungry.

Devote some time between the veritable cornucopia of museums and galleries to the Marais district. In particular, to the traditional brasseries that line the streets, and a tiny cooking school aptly named La Cuisine Française. There are a number of cooking schools around Paris offering courses to the serious gourmande, as well as the playful home cook. La Cuisine Française manages an easy balance between the two and offers variety of classes, as well as tours of the local markets. The chefs are knowledgeable and are all English speaking. The classes are interactive and you go home with a box of goodies and recipes that you would be confident to recreate at home. The only absolute necessities are enthusiasm and a love of butter. Because you will be elbows deep in butter.

Paris is still the beautiful city of my childhood memories, only now I have the recipes for baguettes, croissants and macarons safely tucked in my notebook. These recipes, and the memories they evoke, are more valuable than anything money can buy.