Attention, Cape Town: You can now Dial-a-Koesister on Sunday mornings

As a rich part of Cape Town’s history and identity, Cape Malay food is exceptionally close to the hearts of many Capetonians. A quick drive through Bo Kaap serves as a daily reminder of this rich culture, and a stop at any of the street vendors selling traditional Cape Malay food can often be the most delicious bite in the city.

Two young Capetonians, Abdurageem Randal and his cousin Juwayda Daniels, have brought tradition into the modern age in the form of Dial-A-Koesister, a fresh koesister delivery service. 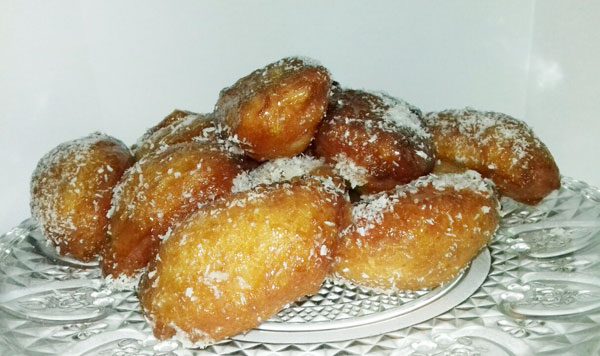 Not to be confused with the koeksister, the koesister is an aromatic doughnut, fried and tossed in syrup before being dusted with coconut. When made properly, they are light and pillowy; the syrupy sweetness balanced by the citrus and spice. They form an important part of Cape Malay weekly rituals. On Sundays, children in the family are often sent to the local tannie to collect freshly made koesisters to take back for the family to enjoy. 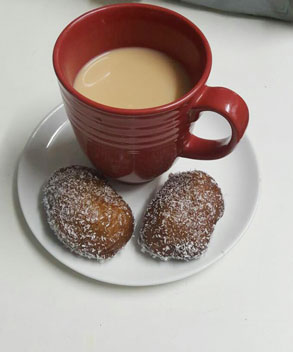 A koesister with tea. Photo supplied.

It was this particular part of the tradition that spawned the creation of Dial-a-Koesister. Abdurageem and his family members would argue every Saturday evening about who would get up early the next morning to fetch the koesisters, and they theorised that other families must have the same issue. Before long, they had roped in the whole family and set up this clever delivery service. Abdurageem says they use a very traditional koesister recipe but they’ve added a few twists to make it their own. Whatever they’re doing, it seems to be working.

Now three months old, Abdurageem says that business grows every week and they’ve had overwhelmingly positive feedback. They offer delivery all over Cape Town, from Wynberg throughout the southern suburbs and town. They’ve recently halted their service to the northern suburbs but will resume them once they’re able to keep up with the demand.

To ‘Dial-a-Koesister’, contact Abdurageem via WhatsApp on 073 367 1895 to place your order before 9pm on Saturdays. They cost R10 for 3 and the delivery fee is R2 per kilometer outside of Wynberg.

It’s all very simple, really – the hardest part is waiting until Sunday for your fresh batch of homemade koesisters.