Pizza Warehouse is the newest addition to Yard 6 on Roodehek Street in Gardens. The hidden location is best known for the massive burgers served at The Dog’s Bollocks, breakfasts by Mucky Mary’s and tacos by The Bitch’s Tits. Now, the team have branched out to pizza with this relaxed new addition. Eat Out’s Cape Town restaurant editor Zola Nene investigates.

Choose between four different styles of pizza: the Neapolitan, the traditional Naples-style saucy pizza; the Romano, a square puffed crust pizza; the New Yorker, massive in size with a variety of toppings; and the California, a thin crust pizza.

The dough for each pizza is carefully handcrafted and allowed to ferment for at least 24 hours for maximum flavour. Each pizza is made fresh to order and arrives piping hot so it can be eaten at its best. 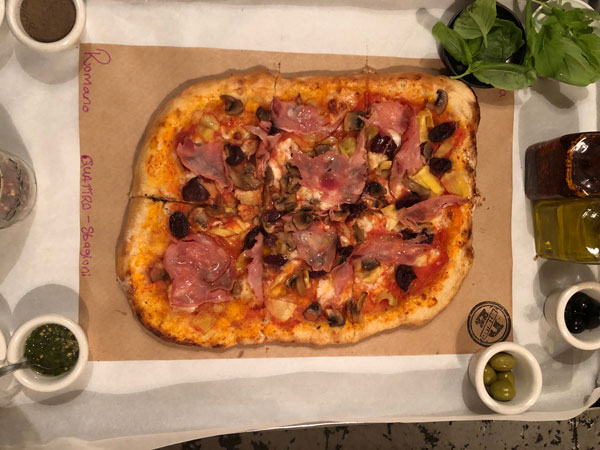 One of the pizzas at Pizza Warehouse. Photo by Zola Nene.

The traditional margherita pizza is sublime, topped with tangy tomato sauce, melted mozzarella and salty pecorino, and finished off with a scattering of fresh basil. For those who like more toppings, try the Quattro Staggioni topped with olives, artichokes mushrooms and wafer-thin prosciutto that crisps up slightly around the edges in the oven, giving it a subtle crunch.

There is a selection of standard pizzas offered, as well as the option to create your own. They arrive served on a tray with a selection of accompaniments such as olives, dried chilli flakes, fresh chilli, fresh basil and rocket, as well as chopped garlic. 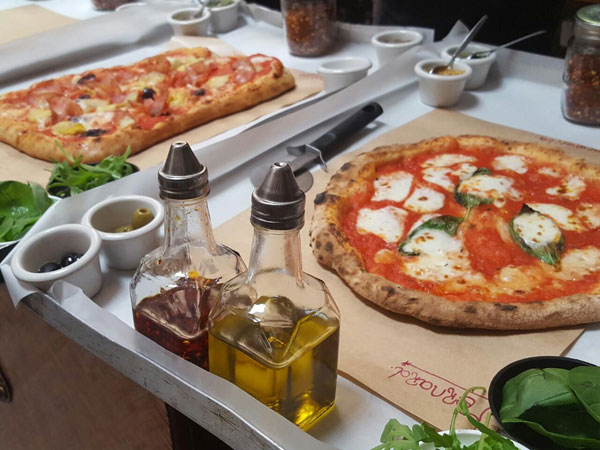 The verdict? These are some of the best pizzas in Cape Town.

The dessert selection is very limited, featuring affogato and Don Pedros. There are also warm chewy brownies studded with caramel pieces served with a choice of vanilla or chocolate ice cream.

The drinks menu at Pizza Warehouse includes a selection of milkshakes with additions such as bananas and peanut butter. There’s a selection of craft beers offered on tap as well as craft cider on tap, including one with a hint of ginger. Some traditional cocktails are also available, as well as a small selection of local wines offered by the glass or bottle. There is an extensive list of hot beverages available as well. 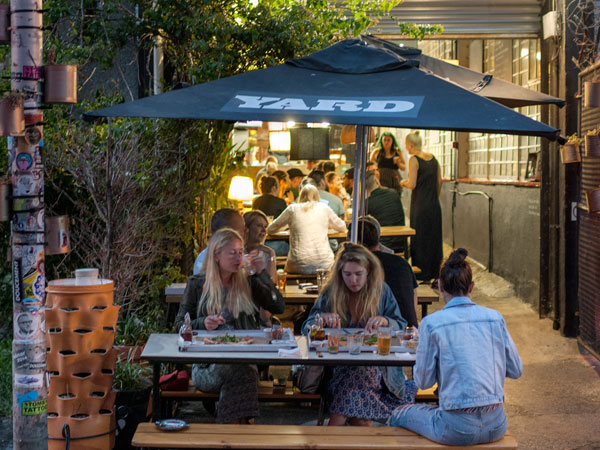 The Yard space has been extended to create a relaxed and open area, just beyond the Dog’s Bollocks. On arrival, you’re asked to allocate a “table bitch” (the leader of the table, of sorts) whose name is written on the chalkboard – be warned, the name will be shouted across the restaurant often during the night. 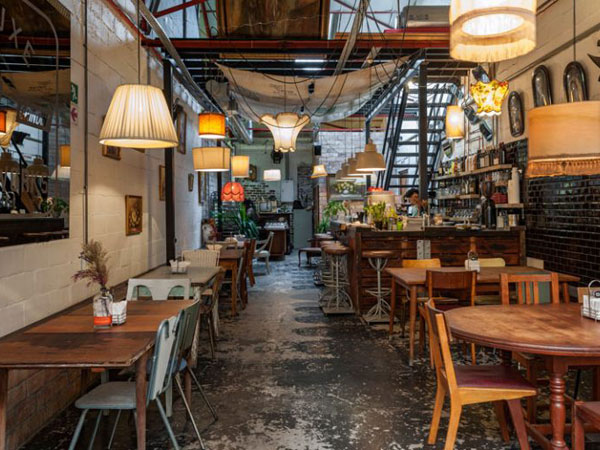 Service is loud and attentive, with the hostess shouting your name and orders to the bar and restaurant staff. The staff is very efficient and well versed in all of the menu items.

They don’t take bookings for tables of less than 10 people, so it’s best to go early to secure your spot if you’re a small group.

Have you eaten at Pizza Warehouse? Write a review and tell us what you thought.