Chef Mitch Lienhard of the United States was crowned S.Pellegrino Young Chef for 2016 this weekend, at an awards ceremony in Milan, Italy. The nail-biting competition has seen over 3000 talented young chefs from around the world compete over 10 months and multiple heats for the title. Mitch’s winning dish was roasted duck with spiced orange and yam, with aromas of burning leaves and maple inspired by his home state of Michigan. The chef competed against twenty finalists from across the globe in the finals, and received guidance from assigned mentor chef Dominique Crenn, who currently holds the title of World’s Best Female Chef. 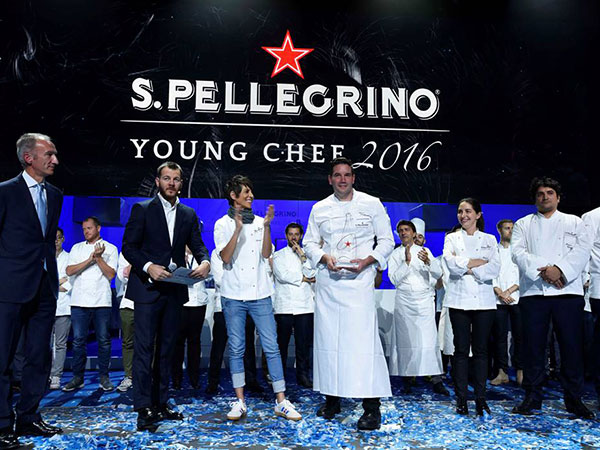 And the three finalists are the young chefs from France, Spain and USA! Congratulations! #SPYoungChef #milan

The Young Chef award ceremony was followed by a gala dinner prepared by Massimo Bottura, chef-patron of Osteria Francescana of Modena, Italy, which currently holds the number 1 spot in the World’s 50 Best Restaurants.

Highlights from the magnificent meal prepared by @massimobottura for the gala dinner of the S. Pellegrino Young Chef 2016 last night. #spyoungchef #milano

This year’s Grand Finale ceremony also included two additional awards. Celebrating a dish that best presents traditional elements in a contemporary way, the Acqua Panna Contemporary Tradition Award was given to Italian Alessandro Salvatore Raspisarda of Italy. Additionally, for the first time ever, the organisers introduced a public-voted award, for most inspiring dish concept. The Inspiring Message Award by S.Pellegrino was presented to winner Daniel Nates from Mexico, representing Latin America, for his dish, ‘Quiltamal’, featuring tamales and avocado leaves, and inspired by Mexican flavours before the arrival of Spanish colonists.

Eat Out was lucky enough to attend the finals and award ceremony. To recap on all the excitement, check out Eat Out’s Instagram feed for highlights from the three days of cooking and the illustrious gala dinner.

For more on the competition, visit our dedicated page.