Eat Out S. Pellegrino Chef of the Year 2014: Chantel Dartnall of Restaurant Mosaic 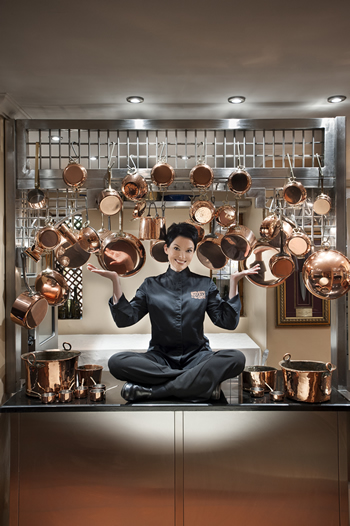 Chef of the Year: Chantel Dartnall of Restaurant Mosaic. (Photo by Dook, production by Annemarie Meintjes.)

In a remote, eccentric setting in rural Gauteng, S.Pellegrino chef of the year Chantel Dartnall is serving up nuanced, nature-inspired food to rival the best of French fine dining.

When people talk of Chantel Dartnall’s food, the words ‘precise’ and ‘delicate’ frequently crop up. There is certainly a sense of precision and delicacy to both the woman and her cooking at Restaurant Mosaic at the Orient Boutique Hotel outside Pretoria. Her food is influenced by French classical cuisine, which demands attention to detail – but what struck the judges was that while Chantel’s food was so extraordinarily elegant, it was also bursting with flavour. That’s just one of the contradictions that define this extraordinary chef, the 2014 S.Pellegrino Chef of the Year.

Trained at the Prue Leith Culinary Academy, Chantel has also gained a huge wealth of knowledge from her extensive travels. Her home kitchen features framed pictures of her and her mother, posing with international culinary heavyweights like Paul Bocuse, Elena Arzak, Guy Savoy and Pedro Subijana. Most recently, Chantel visited Portugal, Madeira, Spain and France – where she gained inspiration from the diversity, quality and complexity of the range of port and Madeira wines. “We enjoyed these wines so much that there is already a container at sea heading for the Mosaic Cellar,” confesses Chantel.

But despite her extensive travels, Chantel takes a whole lot of inspiration from something much closer to home. The restaurant is set in the lush Francolin Conservancy in the Crocodile River Valley – and one of Chantel’s great loves is to create innovative dishes featuring scenes from nature. On the spring menu for example, there are ‘fungi on the forest floor’, a ‘sunflower spring’ and ‘driftwood on the brook’s bank’. 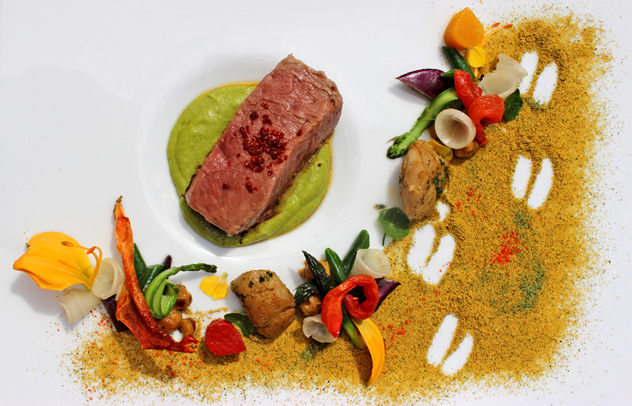 Food at Restaurant Mosaic. Photo courtesy of the restaurant.

This is no rustic, farm-style platter. Flavour pairings are original, unusual and carefully engineered: think rainbow trout served with lime, vanilla and chervil. Sauces are perfectly executed: from a classic bisque to a rich jus, all perfectly seasoned and textured. A West Coast lobster dish with citrus beurre blanc and morels, for instance, features a rich sauce that is delicately flavoured to permeate and complement the lobster – an “absolute knockout”, according to judge Andy Fenner.

The restaurant’s location has another role to play when it comes to Chantel’s cooking – and not in the way you’d think. While many other nominees in the winelands are surrounded by other fine dining restaurants, Chantel is somewhat isolated in her little pocket of Gauteng. “Because it’s so hidden there’s less cross-pollination with other local restaurants,” observes judge Abigail Donnelly. “As a result, you get such a sense of her personality. I just love what she does – it’s so different, so unique, so sophisticated”.

Chantel’s sense of style is also a notable feature. Housed in the Orient Boutique Hotel, with its Moorish architecture and elements from cultures as far-flung as Jaipur and Marrakesh, the restaurant itself is decorated in the sumptuous style of the Parisian Belle Epoque era. 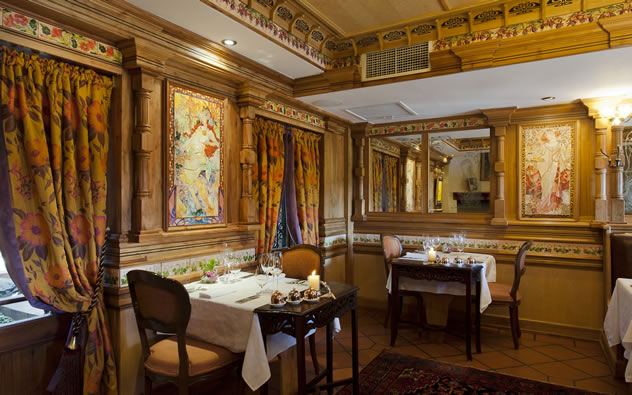 The interior at Restaurant Mosaic. Photo courtesy of the restaurant.

Chantel’s sauces are served in tiny copper pots. “I have always said that one day when I’m grown up I would have a kitchen filled with copper pots”, the chef confesses. She’s made inroads already, with a collection including some pieces from the famed Parisian cookery shop, E. Dehillerin. Restaurant Mosaic’s crockery is unique – embossed, often white – and the delicate cutlery is perfectly suited to its task. It’s an all-encompassing fine dining experience, with white gloves, a bread trolley and silverware. But while some food might struggle to live up to the drama, Chantel’s speaks out confidently.

“It seems unlikely that such a remote, over-the-top restaurant would be serving technically precise, delicious French food – yet that is exactly what Chantel Dartnall is doing,” concludes judge Kate Wilson. “She is cooking exactly the kind of food she wants to, relaying her culinary stories on the plate with skill and restraint in a totally unrestrained setting.”

The Eat Out S. Pellegrino Chef of the Year

The Eat Out S. Pellegrino Chef of the Year Award is an annual award recognising an outstanding chef working in South Africa. Characteristics of top quality, vibrancy and prestige are shared by S.Pellegrino’s products (non-alcoholic aperitifs, soft drinks and flagship mineral waters) as well as a chef at the top of his or her game, making this collaboration – between an emblem of excellence and SA’s best guide to SA’s best food – a perfect fit. The winner of the Eat Out S.Pellegrino Chef of the Year will be afforded the opportunity to take part in the Chef’s Cup SüdTirol in Alta Badia, Italy, in January 2015. This annual event brings together 70 renowned chefs from Italy and the best international restaurants to cook, share ideas and compete in events.